Phreatomagmatic activity at the Indonesian Anak Krakatau volcano has increased over the past couple of days. This is the site of a major eruption and resulting tsunami on December 22, 2018, during which at least 426 people lost their lives and 30 000 were injured,

The Darwin VAAC is reporting continuous volcanic ash up to 3 km (10 000 feet) above sea level on December 30.

The height of the plume is variable depending on eruption strength. 3 km (10 000 feet) is highest observed to far SW, based on Himawari-8 imagery acquired at 09:10 UTC today, Jakarta sounding at 00:00 UTC today and model guidance. 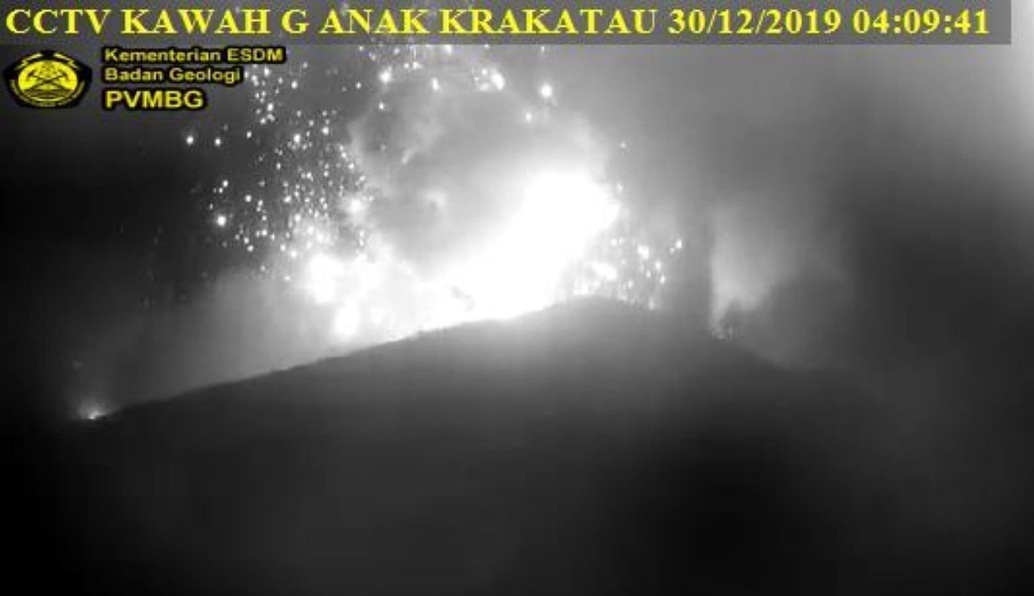 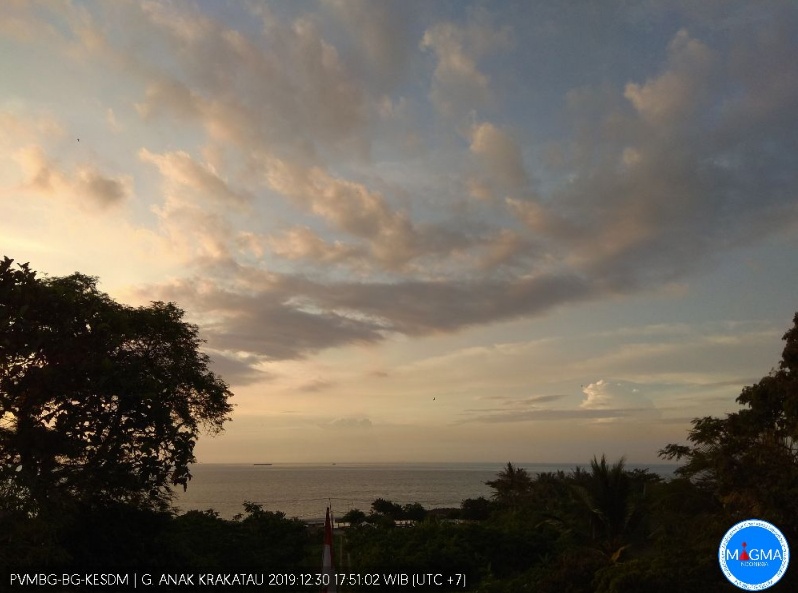 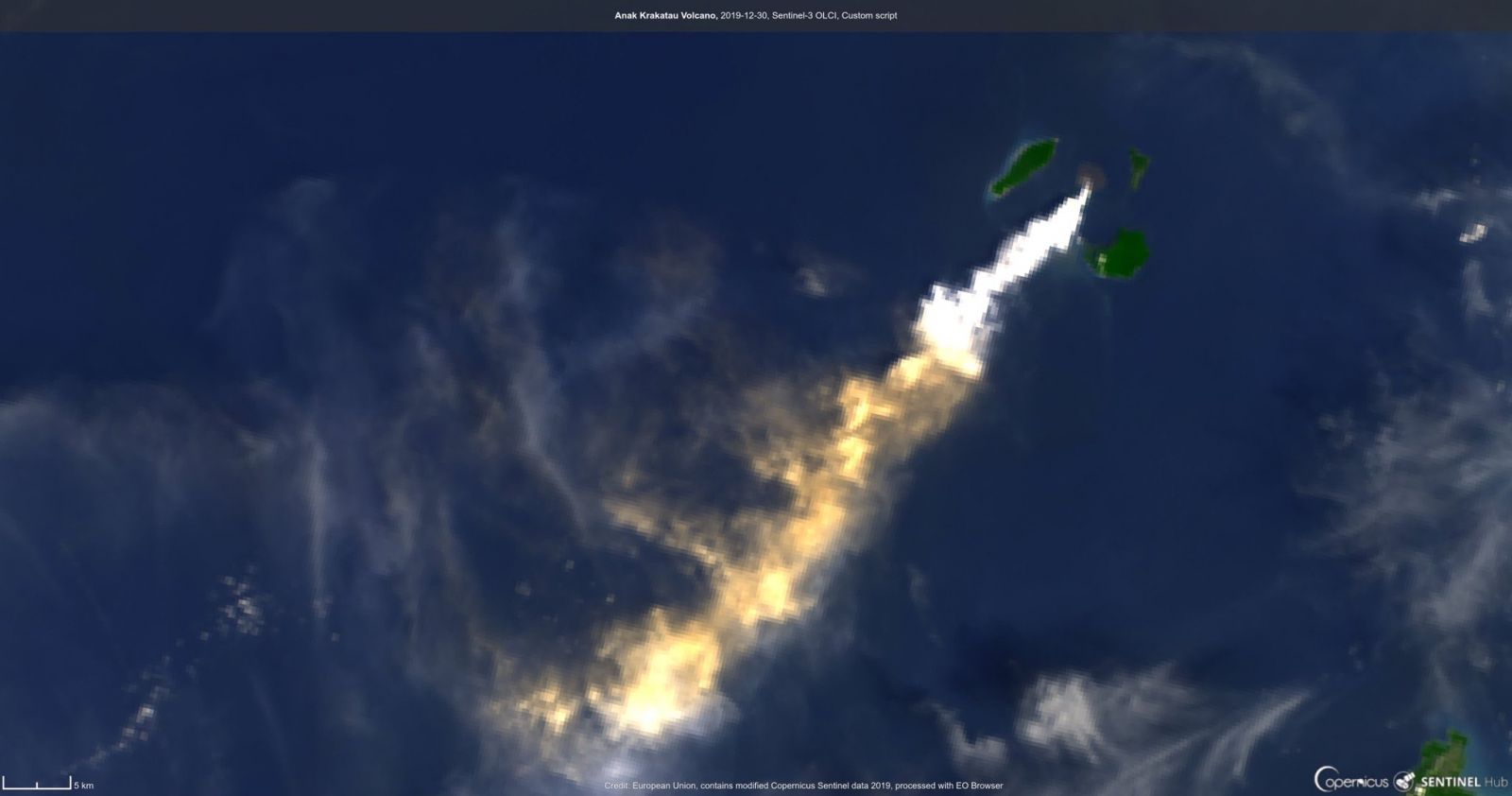 The public and tourists are not allowed to approach the volcano within a radius of 2 km (1.2 miles) from the crater.

Much of the island of Anak Krakatau was destroyed in a series of events that included a deadly tsunami from a flank collapse, a Vulcanian explosion, and several days of Surtseyan phreatomagmatic activity1.

Due to the location of the volcano in the middle of the Sunda Strait, surrounded by coastal communities, damage from the tsunami was once again significant. Over 400 fatalities and 30 000 injuries were reported along with damage to thousands of homes, businesses, and boats.

After a small explosion on January 8, 2019, the volcano remained quiet until February 14 when a new seismic event was recorded. Intermittent explosions increased in frequency and continued through July 2019; images of Surtseyan explosions with ejecta and steam rising a few hundred meters were occasionally captured. 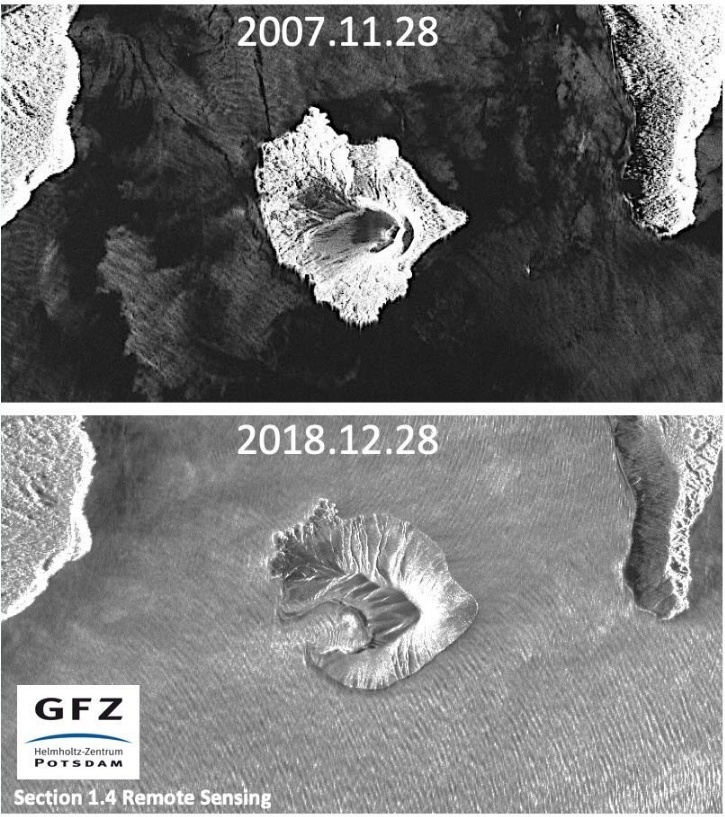 Related articles below cover events leading to December 22 eruption, including off-scale seismicity detected during July 2018, and post-eruption events and studies in chronological order.​

New research shows that the fatal 2018 volcanic eruption of Anak Krakatoa in Indonesia sent a tsunami at least 328 feet (100 m) high, which could have resulted in widespread devastation had it traveled on another path. The researchers say this study is important for…

Research has shown that the Anak Krakatau volcano in Indonesia displayed clear warning signals before it collapsed into the Sunda strait between the Sumatra and Java islands on December 22, 2018. The event triggered a tsunami which resulted in 430 fatalities. The…

A group of tourists visited Anak Krakatau on September 18, 2019, and managed to capture a surprising explosion from a very close distance. The activity at the volcano has not changed over the past weeks, with intermittent phreatic or phreatomagmatic explosions in…

A violent phreatomagmatic eruption took place at Anak Krakatau volcano, Indonesia at 02:09 UTC (09:09 LT) on June 25, 2019. The volcano continues to be restless. Most of the time, its crater is only steaming, but occasionally, strong steam-driven explosions, such as…

PVMBG warns firsherfolk to stay away from Anak Krakatau, Indonesia

The Center for Volcanology and Geological Hazard Mitigation (PVMBG) has called on fisherfolk to stay alert and maintain a safe distance from Anak Krakatau volcano after an increase in eruptive activity was recorded in late February. The PVMBG recorded that there…

James Reynolds of EarthUncutTV visited Anak Krakatau, Indonesia on January 10 and 11, 2019, documenting some of the dramatic changes to the island and the surrounding region after its recent eruptions and devastating tsunami on December 22. At least 431 people…

While volcanic activity continues at Indonesian Anak Krakatau, authorities said they've discovered new cracks running through the remaining island. The discovery raises fears that another potentially large-scale landslide and tsunami could be produced….

Volcanic activity at Anak Krakatau continues increasing, forcing Indonesian authorities to raise the alert level from 2 to 3 (of 4) at 23:00 UTC on December 26, 2018 (06:00 WIB, December 27). More tsunamis are possible and BMKG recommends communities to stay 500 m -…

Powerful eruptions are taking place at Indonesian Krakatau volcano over the past 24 hours. The volcano is producing large lava flows and undersea landslides believed to be the cause of at least one deadly tsunami. According to the Darwin VAAC advisory issued 00:25…

Explosive activity at Anak Krakatau in Indonesia continues and its seismicity is reportedly going off the scale today, July 12, 2018. "Krakatau is going crazy … 100 times explosion a day. Very loud and could be heard until Carita, 42 km (26 miles) away,"…