An asymmetric full halo CME with a likely Earth-directed component erupted May 6, 2019. The source is still unknown, it is possible this was another stealth CME.

Several CME's were produced, including an asymmetrical full halo CME, first observed at SOHO/LASCO C2 imagery at 23:48 UTC on May 6, SWPC forecasters said.

Analysis continued on May 7 and 8 due to the ambiguous nature of some of CME parameters as well as data gaps in coronagraph imagery due to scheduled spacecraft maneuvers.

Analysis of STEREO/COR2 imagery indicated at least one likely CME event occurred in relation to this activity; however, it appeared as though the trajectory of this slow and narrow CME may be directed more north of the Sun-Earth line.

Full halo CME launched May 6 was analyzed further, and it appears to have a likely Earth-directed component, SWPC said May 8.

Initial indications point to potential arrival time at Earth near midday on May 11 (UTC).

The impact is not expected to be strong.

Solar activity is expected to remain very low, with a chance for C-class flares, over the next 3 days as Region 2740 continues to exhibit signs of decay, and Region 2741 remains stable.

The CME was associated with activity and flaring from the spot group RGN 2740, NOAA SWPC forecasters said May 9.

Multiple analyses of this CME were conducted and it was determined the most likely result would be arrival later on May 11 into early May 12 (UTC).

The brunt of the plasma/magnetic flux field appeared to be directed more north of Earth, so there is a level of uncertainty as to arrival and intensity of the geomagnetic response at Earth regarding this CME.

Therefore, SWPC forecasters are currently anticipating overall planetary K4 (Active) levels, with a chance for isolated periods of G1 – Minor geomagnetic storm levels beginning late in the UTC-day of May 11. 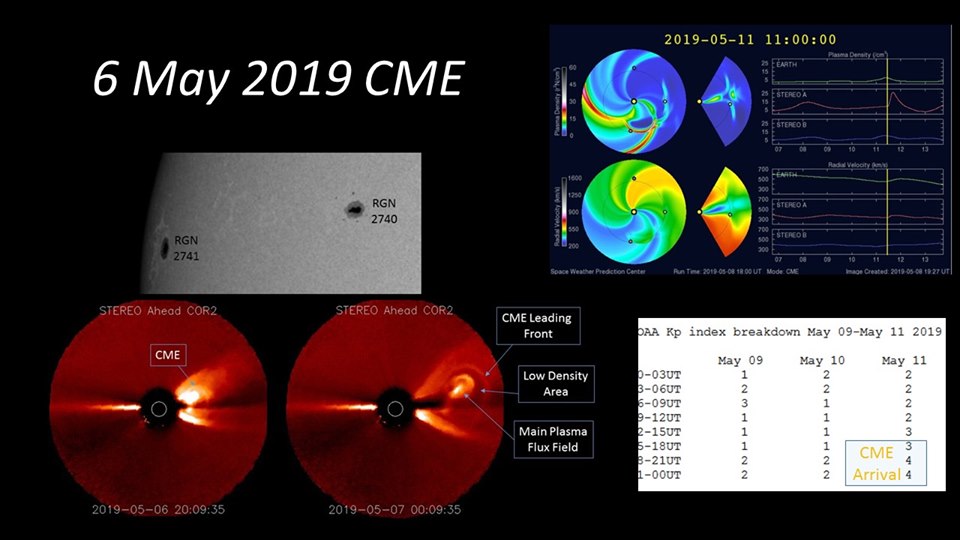