GNS scientists are monitoring a slow-slip event near Gisborne, off the east coast of North Island, New Zealand. This is an update on this event since it started registering in late March 2019.

Slow-slip events are also known as "silent" earthquake. These events are undetectable by both humans and seismograph network. They move faults over weeks to months instead of within seconds like the earthquakes that you typically think of.

The event has been happening for around a month now and GNS scientists measured the largest amount of eastward movement during the first week of the event. The slow-slip has continued at a slower, but steady rate since then.

"This slow-slip event is now as large as the biggest previous slow-slip event GeoNet recorded off Gisborne in March 2010. So far, the plate movement that has occurred in this event is equivalent to a magnitude 7.0 earthquake," GNS Science Geophysicist Laura Wallace said.

Scientists used displacement data from GeoNet GPS sites on the earth’s surface to figure out how much movement has occurred on the Hikurangi Subduction Zone below the eastern North Island. This reveals that this slow-slip event has involved up to 20 cm (7.8 inches) of movement on the Hikurangi plate boundary offshore of Gisborne, and possibly even more offshore Hawke’s Bay, as you can see from the below slip model. 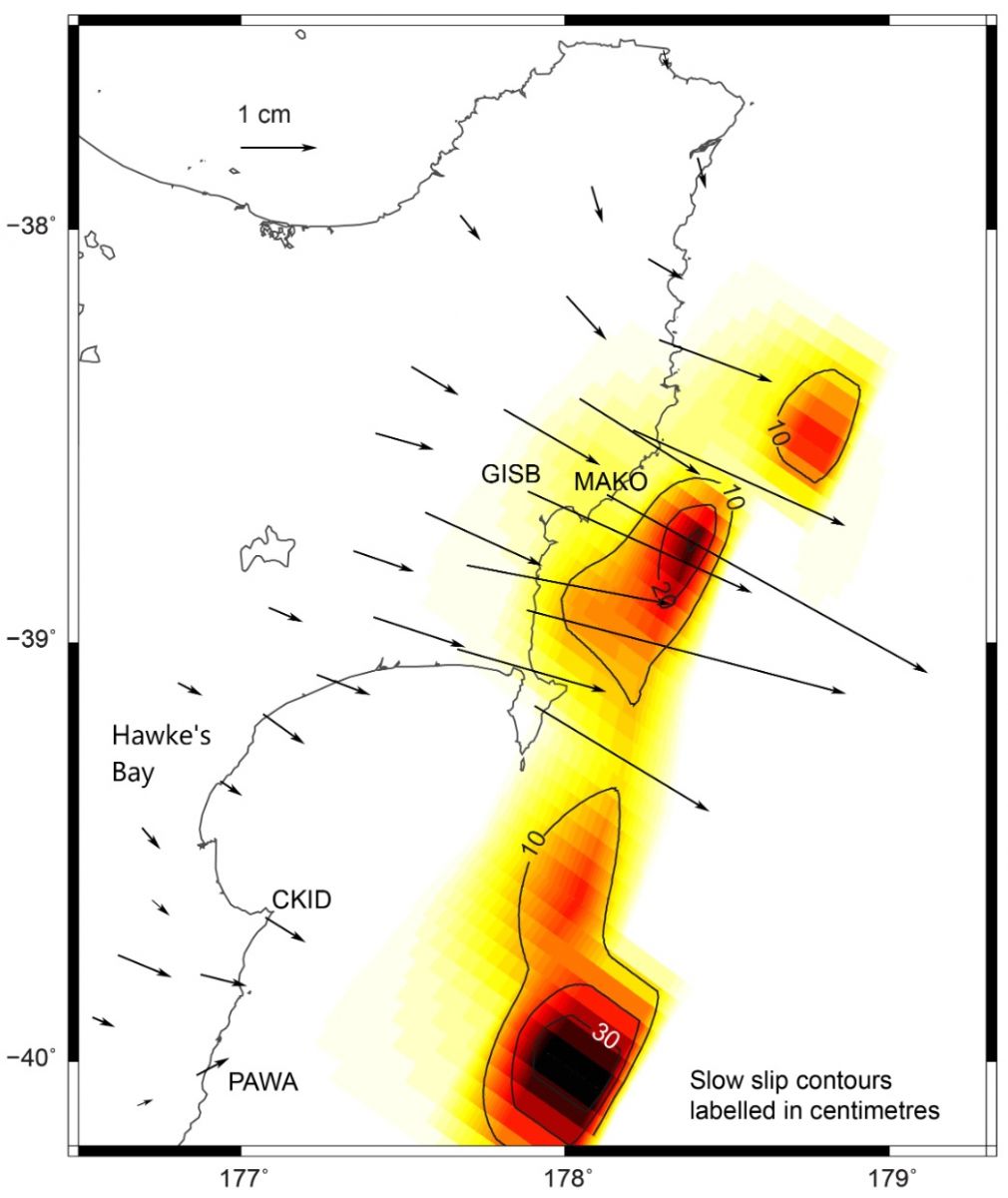 The below graphs, from GeoNet, show the east component of the GPS site positions over the last several years. On these images, the GPS site MAKO (located just north of Gisborne) has undergone the largest displacement in this event, with over 4 cm (1.6 inches) of movement. Another GPS site close to Gisborne (GISB) also moved approximately 3 cm (1.2 inches) to the east.

"We’ve also noticed in the last week that some of our southern Hawke’s Bay GPS sites, such as at Cape Kidnappers and Pawanui, have been picking up movement and are joining in on this slow-slip event. This suggests that the rupture of this slow-slip event is propagating south now too. Propagation of slow slip events from offshore Gisborne into the Hawkes Bay region was also observed in 2016," Wallace said.

"Scientists can use displacement data from GeoNet GPS sites on the earth’s surface to figure out how much movement has occurred on the Hikurangi Subduction Zone below the eastern North Island."

"Our scientists have been anticipating this slow-slip event, as our slow-slip record has shown regular events every 1 – 2 years, and much larger events every 4 – 6 years. Fortunately, our scientists currently have seafloor instruments deployed in this area that will give better insights into what has happened offshore," Wallace added.

Wallace also said that New Zealand is on a very active tectonic plate boundary. She reminded everyone to help keep their family safe by having an earthquake plan.

"Know what you should do in the event of a large earthquake, be sure to Drop, Cover and Hold. If you are near the coast and you feel a Long OR Strong earthquake, get to higher ground once the shaking has stopped in case a tsunami was generated."