Activity at Hawaiian Mauna Loa volcano has risen to levels comparable to a higher period of activity between 2014 and 2017, HVO scientists said. The last eruption at the volcano took place in 1984.

While there is no cause for alarm, those signs of higher activity include increased earthquakes and ground deformation around the volcano's summit, HVO scientist-in-charge Tina Neal said, as reported by the Hawaiian Tribune-Herald.

The volcano has experienced up to 90 earthquakes a week since August, although most of the quakes have been mild, measuring 2.0 or less on the Richter scale, she said, adding that earthquakes on Mauna Loa dropped to less than five a week around early 2018.

Deformation rates appear similar to how they were in the volcano's more active period starting in 2014, but are not as high as the highest deformation during that time, when some parts of the volcano measured approximately 5 cm (1.9 inches) in a year.

While there is some geological basis to suggest a correlative pattern, this new activity will test the hypothesis.

"An eruption could be anywhere from months to years away," Neal said. "But we do know that it’s not days or weeks away."

Mauna Loa has not erupted with the frequency of Kilauea in recent years, but its 33 historical eruptions have, on average, generated much larger volumes of lava on a daily basis. Lava flows on Mauna Loa tend to travel much longer distances in a shorter period of time than those on Kilauea. Thus, warnings and notifications in the first few hours of an eruption are critical for public security. 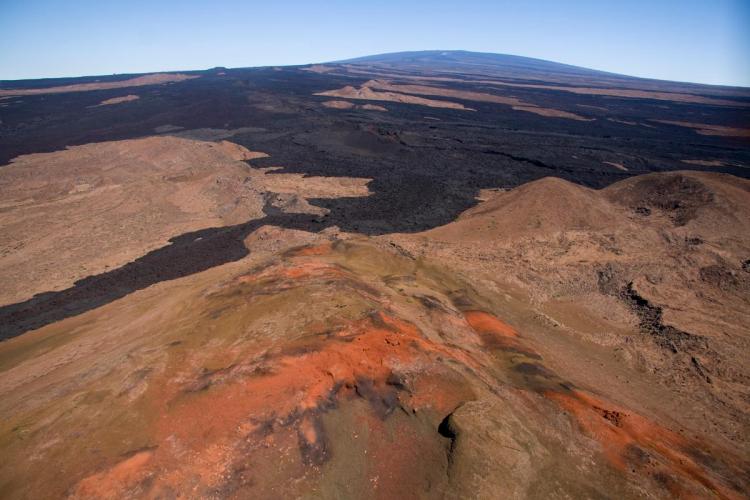 View looking up Mauna Loa's spectacular Southwest Rift Zone. Pu'u o Keokeo fills the lower half of the photo. The black lava beyond is mostly from 1916 and 1926. The summit of Mauna Loa is in background. Credit: USGS/HVO

Mauna Loa is the largest active volcano on Earth. Eruptions typically start at the summit and, within minutes to months of eruption onset, about half of the eruptions migrate into either the Northeast or Southwest Rift Zones. Since 1843, the volcano has erupted 33 times with intervals between eruptions ranging from months to decades. Mauna Loa last erupted 35 years ago, in 1984.

Eruptions at Mauna Loa tend to produce voluminous, fast-moving lava flows that can impact communities on the east and west sides of the Island of Hawaiʻi. Since the mid-19th century, the city of Hilo in east Hawaiʻi has been threatened by seven Mauna Loa lava flows. Mauna Loa lava flows have reached the south and west coasts of the island eight times: 1859, 1868, 1887, 1926, 1919, and three times in 1950.