Numerous car crashes were reported around Lubbock, Texas on April 10, 2019, as strong winds swept over the region, blowing huge amounts of dust.

NWS reported sustained winds of 65 –  80 km/h (40 – 50 km/h) and gusts to 117 km/h (73 mph) along with low humidity and warm temperatures, prompting red flag, wind and blowing dust warnings for Lubbock County and much of the South Plains. 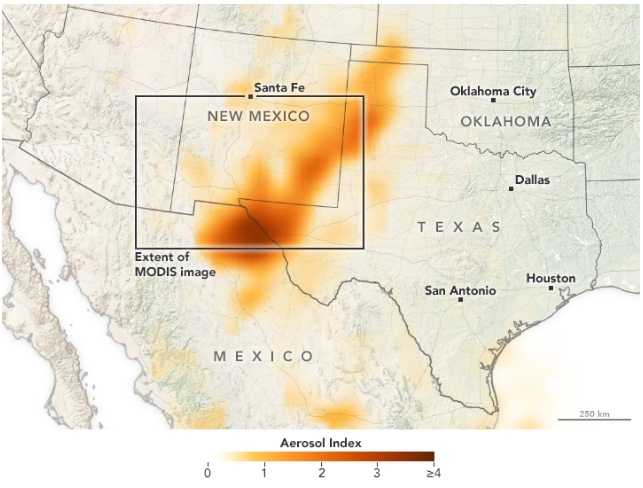 The concentration of aerosols, including dust, on April 10, 2019. Credit: NASA/NOAA Suomi NPP/OMPS

Numerous crashes were reported on I-27 between Lubbock and New Deal around 18:00 LT and on U.S. 84 near Roundup and Anton.

"Due to high winds and blowing dust, multiple areas are reduced to zero or near-zero visibility. Troopers are on scene on U.S. 84 and are en route to crashes on I-27," Lt. Bryan Witt with the Texas Department of Public Safety said.

"Visibility is zero at these locations and traffic cannot safely proceed through these areas at this time," he said.