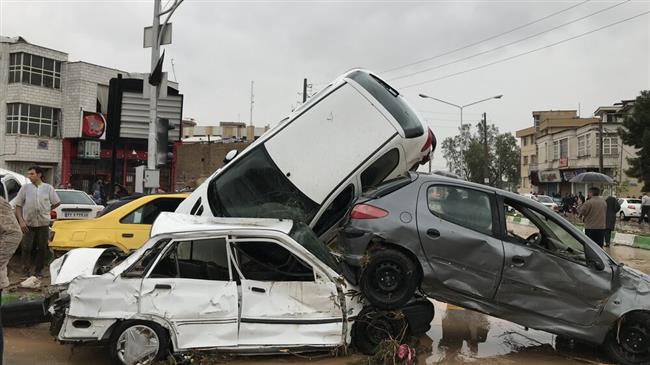 At least 21 people have been killed and 119 injured after heavy rain hit the city of Shiraz, southern Iran on Monday, March 25, 2019, causing severe flash flooding.

Heavy rains started falling on the historic city of Shiraz, Fars Province on Monday morning, producing sudden and violent flooding in which at least 18 people lost their lives. Flash floods started from hills around the city and in a matter of minutes inundated parts of the city.

The chief coroner of the city said earlier that 6 men, 7 women and 3 children are confirmed dead in the floods and dozens of people have been taken to hospitals with injuries.

Head of the Iran Police Information and Traffic Control Center Nader Rahmani said the flood has carried away more than 200 vehicles, though the exact number is not clear yet.

Fars governor, Enayatollah Rahimi, said the flooding is now under control and aid work is in progress but he urged residents to stay home until further notices.

He said heavy rains were expected and preparations had been made days in advance, but many of the people did not heed the warnings. In addition, the speed of the floods surprised all of them.

WATCH: Aftermath of flash flooding that tore through the southern #Iranian city of #Shiraz.

At least 11 people died and over 20 injured. pic.twitter.com/CsvticYPXW

Clean-up operations underway after flash floods hit the city of #Shiraz in southern #Iran and swept away dozens of vehicles. At least 17 people died and over 70 injured. pic.twitter.com/j4gvg1xg1D

According to the state-run Press TV channel, the northern provinces of Golestan and Mazandaran have been struggling with flooding for over a week, and five people have been killed. 56 000 people have been affected.

People spare no effort to save animals in flood stricken areas in northern #Iran#Flood#Golestan#Mazandaran pic.twitter.com/msM6pi4NxT

Iran's President Hassan Rouhani has put all governors, governors general and officials in all Iranian provinces on full alert on Sunday, March 24 as widespread flooding continues in many parts of the country.

Iran’s Meteorological Organization has warned that the downpours will continue for the next two days in various parts of the country.