A strong explosive eruption took place at Sheveluch volcano, Kamchatka, Russia at 05:49 UTC on March 9, 2019. The Aviation Color Code was raised to Red.

A moderate gas-steam activity volcano continues at the volcano, the observatory said, adding that ash explosions up to 10 – 15 km (32 800 – 49 200 feet) a.s.l. could occur at any time. Ongoing activity could affect international and low-flying aircraft. 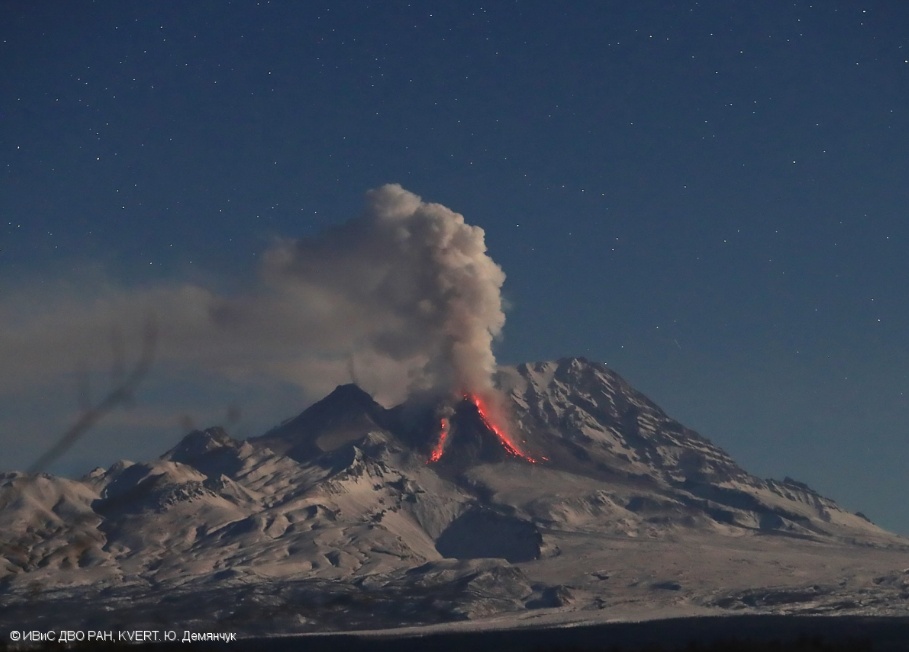 Growth of the lava dome continues (viscous lava blocks extrude out on the northern part of it), a strong fumarolic activity and incandescence of the dome blocks and hot avalanches accompanies this process. Credit: Yu. Demyanchuk. IVS FEB RAS, KVERT

Sheveluch’s lava dome continued to grow, extruding blocks on the N side, and producing hot avalanches and fumarolic plumes during February and into March.

The high, isolated massif of Sheveluch volcano (also spelled Shiveluch) rises above the lowlands NNE of the Kliuchevskaya volcano group. The 1 300 km3 (311.9 mi3) volcano is one of Kamchatka's largest and most active volcanic structures. The summit of roughly 65 000-year-old Stary Shiveluch is truncated by a broad 9-km-wide (5.6 miles) late-Pleistocene caldera breached to the south. Many lava domes dot its outer flanks. The Molodoy Shiveluch lava-dome complex was constructed during the Holocene within the large horseshoe-shaped caldera; Holocene lava dome extrusion also took place on the flanks of Stary Shiveluch.