A powerful eruption started at Manam volcano, Papua New Guinea around 03:00 UTC on December 8, 2018. Heavy ashfall is falling on the island, blocking out sunlight.

Heavy ashfall is blocking out sunlight on the island, locals report.

New #eruption of #Manam (#PapuaNewGuinea) today (Dec 8) – started just before the early PM (~1:30 pm) overpasses of SO2 sensing satellites. #Sentinel5P #Tropomi captured SO2 emissions at the eruption onset. Also getting SO2 alerts from other satellites. @EmmaLiu31 @BrendanVolc pic.twitter.com/7aemXZK9RN

Breaking:
The Manam volcano in Madang has erupted again. Reports from the island say heavy ashfall is blocking out sunlight on the island. The eruption began at about 1pm. We provide updates as information becomes available. #manam #volcano #emergency#EMTV pic.twitter.com/35w8IXCCXB

Volcanic ash to 13.7 km is expected to dissipate within the next 3 hours. 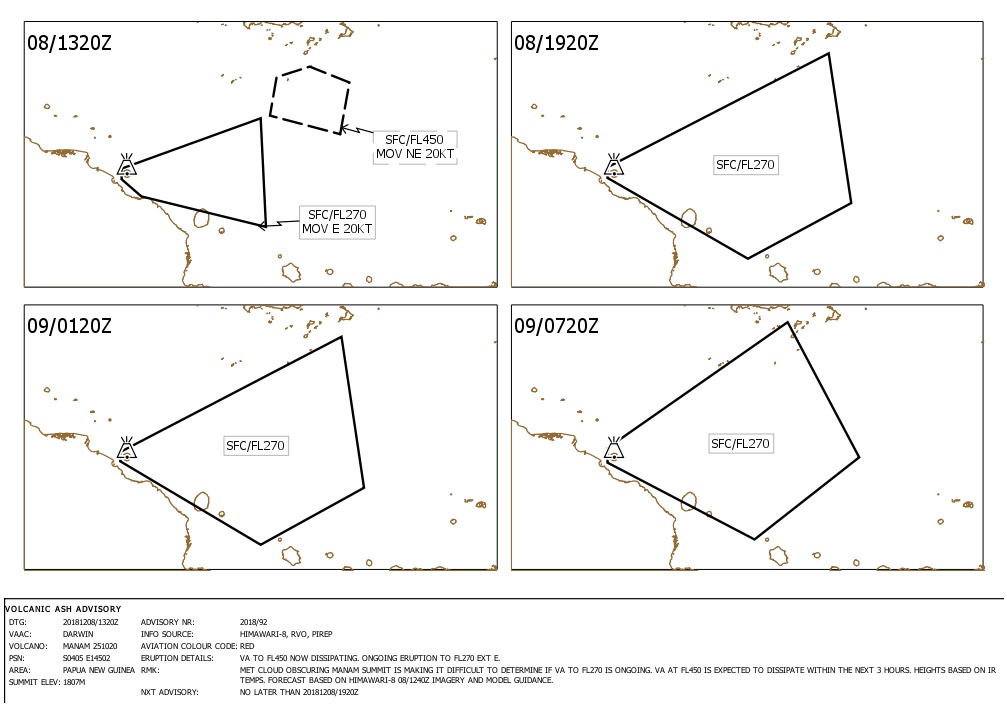 The previous high-impact eruption of this volcano took place on August 25, 2018, after island residents reported increased activity beginning an hour before.

According to the Darwin VAAC, ash plumes visible in satellite data rose to 15.2 km (50 000 ft) a.s.l. The plume drifted W and NW, causing ash and scoria to fall in areas from Dangale in the NNE to Jogari in the SW part of the island.

The most affected areas were Baliau and Kuluguma; residents reported fallen tree branches from the deposits, and conditions so dark that flashlights were needed to move around.

The pyroclastic flows buried six houses in Boakure village though the occupants escaped to the nearby Abaria village.

About 2 000 people evacuated after the eruption.