Unprecedented numbers of sea turtles have been collected across Florida's Lee and Collier counties over the past week, and hundreds are thought to have died as the worst red tide algae bloom event since 2006 plagues southwest Florida. The Florida Fish and Wildlife Conservation Commission (FWC) is monitoring the current bloom since November 2017.

The FWC has documented 287 sea turtle deaths in Gulf of Mexico waters along the southwest Florida coast since the toxic bloom started late last year.

According to Allen Foley of the FWC's Fish and Wildlife Research Institute, that's about double the average number of turtle deaths in those waters every year.

Foley said turtles living in the area become sick and die when their food gets contaminated by the toxins.

Loggerhead and Kemp’s ridley sea turtles are the two species primarily affected by the bloom, both federally protected turtles.

Kemps' ridleys are one of the world's most endangered sea turtles. 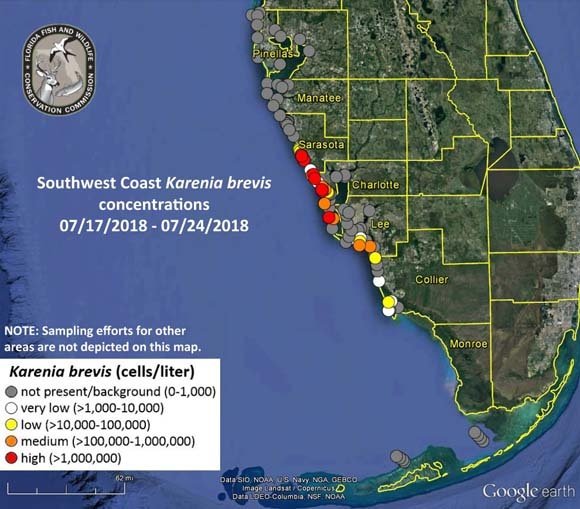 "Our average for the entire year is usually around 30 or 35, but we’ve had 53 in June and July alone," Kelly Sloan, a sea turtle researcher at the Sanibel-Captiva Conservation Foundation on Sanibel told Fort Myers News-Press.

"Most of them have been mature adults, and only 1 in 1 000 make it to adulthood," Sloan said. "It takes a loggerhead 25 to 30 years to mature, so that really does have a significant impact on their recovery."

"It’s really disheartening to see this mass mortality," Sloan said. "This is the 10th month of the red tide event, and it’s the longest continued bloom since 2006."

Heather Barron, the head of the Center for the Rehabilitation of Wildlife veterinarian hospital on Sanibel said the red tide outbreak has collided with the height of sea turtle reproduction, something that doesn't often happen.

"This is way, way high," Barron said of the turtle numbers. "Normally red tide season is over in April. But now sea turtle nesting is at its peak, and you have adults in nearshore waters. And because of that, they’re being affected."

This is the scene on the Sanibel Causeway in Lee County, July 29. Red tide algal blooms are decimating the sea life. This is a big problem
by Adam Goetz pic.twitter.com/ALhV9SjhiY

Look at this sick endangered Loggerhead sea turtle found on the beach in #Captiva suffering from #redtide toxins. Experts say close to 100 sea turtles have washed up dead in #SWFL this year. pic.twitter.com/HHFyBvSYns

More mortality in #Florida; 100's of dead fish and another Kemp's Ridley #Turtle. The implications from #RedTide for #seafood and #marine #biodiversity are depressing. #SDG14 pic.twitter.com/bW723aGJEL

The water does not look inviting with that color. I’m on Manasota Beach. This area has been hit hard by red tide. @FOX13News #Manasota #Sarasota #RedTide pic.twitter.com/NxRUtnu8Gj

Some algae produce toxins that have harmful effects on people, fish, marine mammals, and birds. It can result in varying levels of eye and respiratory irritation for people, which may be more severe for those with pre-existing respiratory conditions (such as asthma).

The blooms can also cause large fish kills and discolored water along the coast.

The FWC's Fish Kill Hotline has so far received over 300 fish kill reports associated with this event.