The eruption of Kilauea volcano in the lower East Rift Zone (LERZ) continues with no significant change. Fountains from the fissure 8 spatter cone, now about 55 m (180 feet) continue to supply lava to an open channel that travels about 13 km (8 miles) to the sea. More than 650 homes have been destroyed since Kilauea started erupting on May 3, 2018, forcing the evacuation of more than 2 000 people.

The spatter cone is now about 55 m (180 feet) tall at its highest point, and fountains rarely rise above that point. At the coast, the northern margin of the flow field is still oozing pasty lava at several points in the area of Kapoho Beach Lots.

A collapse/explosion event occurred at Kīlauea's summit at 00:51 UTC on July 1, producing an ash-poor plume that rose about 150 m (500 feet) above the ground and drifted to the southwest. The energy released by the event was equivalent to a M5.3 earthquake.

Since May 16, these collapse/explosion events have occurred on average, about every 28 hours. As magma from the shallow reservoir beneath the summit drains into the East Rift Zone, it slowly pulls away support of the rock above it. The crater floor responds by incrementally collapsing, which produces these events.

This video, taken by a USGS observer at Volcano House on June 30, captures rockfall (brown dust visible in the center right) along the bluff and a small plume rising from the Halema‘uma‘u crater.

HVO field crews monitoring fissure 8 on the same day captured this video of a whirlwind above the lava channel. The vortex of rapidly swirling air entrained hot lava, flinging it meters away. The scientists maintained a safe distance, using a telephoto lens to take this video. The whirlwind lasted about 10 minutes, starting and stopping without warning.

The animated GIF below shows a sequence of radar amplitude images showing changes to the caldera area of Kīlauea volcano that occurred between May 5 and June 30.

Starting in late May, the development of several cracks outside Halema‘uma‘u is clear, and inward slumping of a large portion of the western, southwestern, and northern crater rim begins. Much of this motion appears to be coincident with the small explosions from the summit that have taken place on a near daily basis since early June.

The most recent radar scene, from June 30, shows the formation of cracks over a broader area of the caldera floor, extending east of Halema‘uma‘u (these cracks are the scarps seen in recent photographs from the Keanakākoʻi overlook area).

"We expect this slumping to continue as long as the collapse events and overall subsidence persist," HVO scientists said. 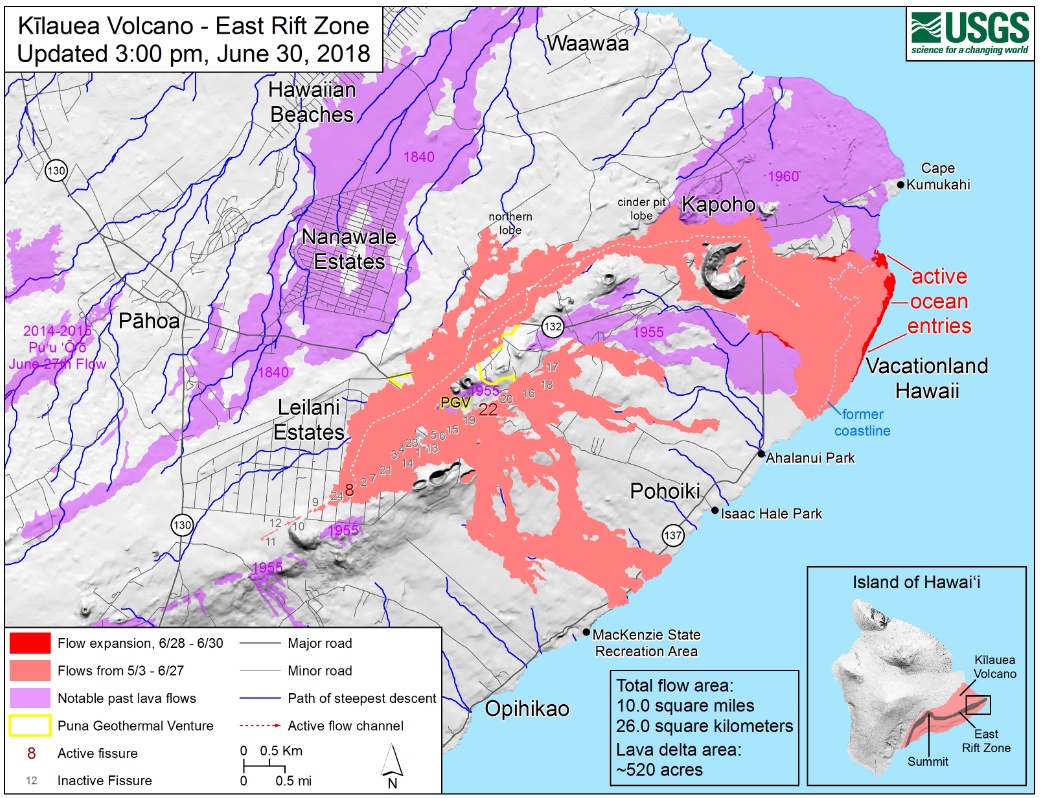 Lava was entering the sea over a broad area on the morning of July 2, primarily on the northern side of the entry area.

As shown by the June 29 thermal map of the flow field, the lava channel has crusted over about 0.8 km (0.5 miles) inland of the ocean entry; lava oozing from the flow's molten interior into the ocean along most of its broad front. 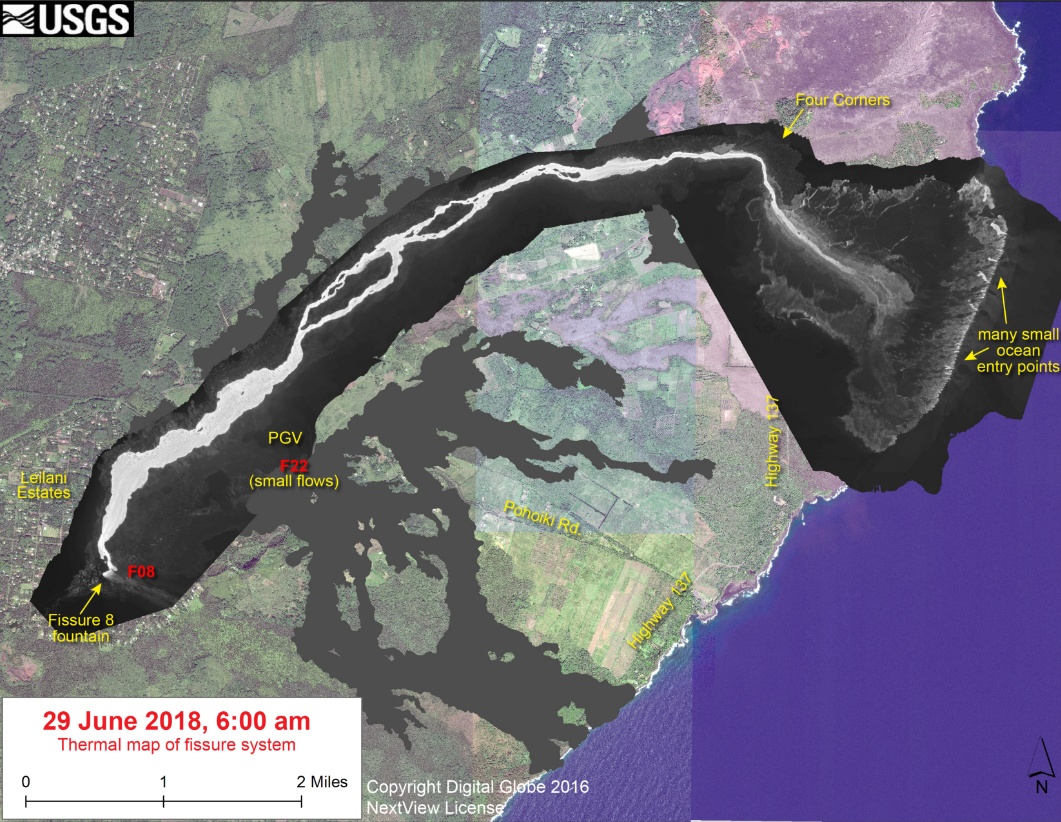 Fissure 22 is spattering about 50 – 80 m (164 – 262 feet) above conical spatter cone and feeding a short lava flow that is moving slowly to the northeast along the edge of earlier flows.

Pele's hair and other lightweight volcanic glass fragments from the lava fountain at Fissure 8 continue to fall downwind of the fissure, dusting the ground within a few hundred meters (yards) of the vent. High winds may waft lighter particles to greater distances. Residents are urged to minimize exposure to these volcanic particles, which can cause skin and eye irritation similar to volcanic ash.