Hypoxia, or low oxygen, is an environmental phenomenon where the concentration of dissolved oxygen in the water column decreases to a level that can no longer support living aquatic organisms. Hypoxic areas, or 'Dead Zones,' have increased in duration and frequency across our planet’s oceans since first being noted in the 1970s. The largest hypoxic zone currently affecting the United States, and the second largest hypoxic zone worldwide, is the northern Gulf of Mexico adjacent to the Mississippi River.

The latest estimate is based on the assumption that there are no significant tropical storms occurring in the two weeks before the monitoring cruise, or during the cruise. If a storm does occur, then the size of the zone is predicted to be 70% of the predicted size without the storm, equivalent to 12 075 km2 (4 662 mi2). The predicted hypoxic area is slightly larger than the State of Connecticut (14 357 km2 / 5 543 mi2) and 4% larger than the average of 16 357 km2 (6 315 mi2)

Although this forecast has been the average size for the past 31 years, it is about three and a half times larger than the goal outlined by the Hypoxia Action Plan, which is about 4 998 km2 (1 930 mi2). Efforts to reduce the nitrate loading have not yet demonstrated success at the watershed scale.

Every year LSU Department of Oceanography & Coastal Sciences professors and Louisiana Universities Marine Consortium scientists Nancy Rabalais and Eugene Turner conduct a research cruise to measure the dead zone, which has little or no oxygen in the bottom waters. Turner and Rabalais then use these data in their computer models to predict its size in the summer.

Nutrients from the Mississippi River watershed, particularly nitrogen and phosphorus, fertilize the Gulf of Mexico's surface waters to create excessive amounts of algae. When the algae decomposes in the deepest parts of the ocean, it leads to oxygen distress and can even kill organisms in the Gulf of Mexico's richest waters. These low oxygen conditions threaten living resources including fish, shrimp and crabs, which humans depend upon for food and industry. 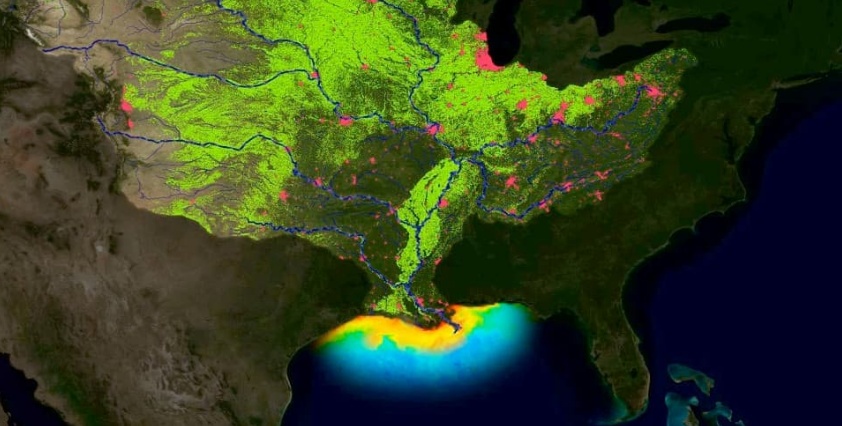 This image from a NOAA  Environmental Visualization Lab animation shows how runoff from farms (green areas) and cities (red areas) drains into the Mississippi. This runoff contains an overabundance of nutrients from fertilizers, wastewater treatment plants, and other sources. This nutrient pollution eventually ends up in the Gulf of Mexico, leading to the formation of hypoxic "dead zones."

"This means that the impacts of water quality changes upstream in the Midwest affect our coast – directly," Rabalais said.

The dead zone occurs year-round, but it is most persistent and severe in spring and summer. Various computer models use the May nitrogen load of the Mississippi River as the main driving force to predict the size of this hypoxic zone in late July. If a storm occurs, then the size of the dead zone is predicted to be reduced to about 16 358 km2 (6 316 mi2).

Featured image: This image from a NOAA Environmental Visualization Lab animation shows how runoff from farms (green areas) and cities (red areas) drains into the Mississippi. This runoff contains an overabundance of nutrients from fertilizers, wastewater treatment plants, and other sources. This nutrient pollution eventually ends up in the Gulf of Mexico, leading to the formation of hypoxic "dead zones."