An extremely rare an unique subtropical cyclone formed off the coast of central Chile on May 7 and 8, 2018. The system transitioned from a typical cold core baroclinic mid-latitude cyclone to a shallow warm core cyclone with some deep convection around the center of circulation in a part of the world where no subtropical or tropical cyclone have ever been recognized.

"It may be one of a kind," TWC experts said, adding that no other recognized subtropical or tropical storm has been documented in that part of the world. However, this is up to some debate, unofficially, as a similar subtropical cyclone (Subtropical Storm "Katie") formed near Easter Island in 2015.

TWC meteorologist Jonathan Belles said the system formed in water temperatures between 18 and 20 °C (and 64 and 68 °F), which is usually not supportive of sufficient thunderstorm activity that would help build a subtropical or tropical cyclone. However, the system is located in the midst of an upper-level trough, or cold pool, of low pressure, adding the instability needed for thunderstorms.

Subtropical cyclone off the coast of central Chile May 6 – 10, 2018. Credit: NOAA/GOES-East

"Interestingly, if there was a cyclone season in that part of the world, this system would have nearly fallen outside of it," Belles writes.

"A cyclone in the southern Pacific occurring in May is like a tropical storm occurring in November in the Atlantic. If there was a peak month for activity surrounding South America, it would be in February or March, so this system is quite late." 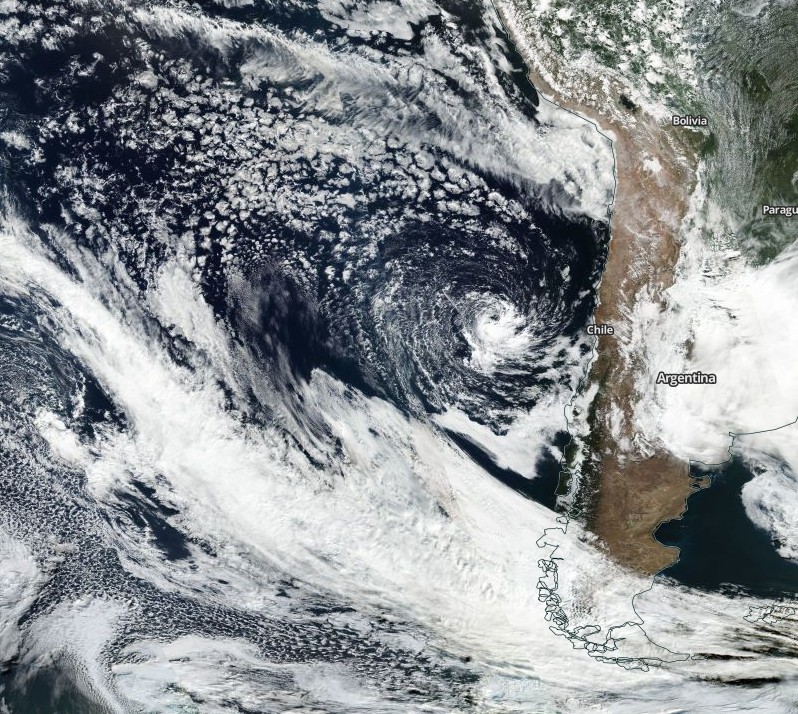 Subtropical cyclone off the coast of Chile on May 8, 2018. Credit: NASA/NOAA Suomi NPP/VIIRS

There are two reasons why we don't see more subtropical or tropical storms in some ocean basins: Lack of responsibility and lack of good conditions, Belles explains.

"Part of the reason that no tropical or subtropical cyclone has ever been named is because there is nobody to name such a storm. There is no Regional Specialized Meteorological Centre (RSMC) specifically in charge of the southeast Pacific Ocean. On the opposite side of South America, in the south Atlantic Ocean, there have been several subtropical systems that have formed in recent years that have gone officially off the record."

"In recent years, though, the Brazilian Navy Hydrographic Center has named such systems when they attain sustained wind speeds of 40 mph or greater. These systems are still largely off the record, and the record we do have is very short. Similar subtropical systems have also occurred in the Mediterranean Sea between Europe and Africa. These systems are often called medicanes by meteorologists in the region despite their usual lack of hurricane force winds."

Medicanes, short for Mediterranean hurricanes, are relatively rare in Europe, typically forming once or twice each year. They can be very destructive and deadly, even when they don't reach their full potential, such as Medicane "Numa," also known as Zenon (derived from theonym Zeus), which caused severe flash flooding near Athens, Greece, on November 15, killing at least 16 people and leaving 2 others missing.

Featured image: Subtropical cyclone off the coast of Chile on May 8, 2018. Credit: NOAA/GOES-East