China is testing cutting-edge weather modification technology in Tibetan Plateau. The country aims to implement a large-scale weather changing project to ensure a consistent rain supply in the area three times as big as Spain, nearing 1 million km2 (620 000 mi2). The system is created from a network of solid fuel burning chambers that produce silver iodide, a compound with a structure much like ice that can be used in cloud seeding. Tens of thousands of small burning chambers will be installed across the Tibetan Plateau in an attempt to increase rainfall in the area. Once in place, the system has the potential to increase rainfall in the region by up to 10 billion cubic meters a year, which amounts about 7% of China's total water consumption.

It is the world’s biggest single weather changing project ever attempted. The system relies on small low-tech chambers which burns solid fuel that produces silver iodide. As wind sweeps up the mountain, the particles are swept up into the air where they form rain clouds. The system has been developed by China’s state-owned Aerospace Science and Technology Corporation.

The burning chambers are designed by space scientists who needed to find a way to efficiently burn the high-density solid fuel in the oxygen-scarce environment at an altitude of over 5 000 meters (16 400 feet).

The current design of the chambers is so precise that it can reportedly burn for months without maintenance and emits only vapors and carbon dioxide, which allows them to be used even in environmentally sensitive areas.

"[So far,] more than 500 burners have been deployed on alpine slopes in Tibet, Xinjiang and other areas for experimental use. The data we have collected show very promising results," a researcher working on the system told, according to the South China Morning Post.

The weather modification system was originally developed as part of China’s defense program. China, the United States, and Russia have all developed weather changing technology to possibly impede opposition in times of conflict. Countries have researched ways to increase the chances of drought, flood or other natural disasters. The Aerospace Science and Technology Corporation recently signed an agreement with the Tsinghua University and Qinghai province to install the weather modification system on a large scale.

The collaboration will bring the knowledge of the burning fuel chambers together with research carried out by the university in 2016 that explored ways to intercept Indian Monsoon rain clouds coming over the region. If successful the system will increase the water supply by five to 10 billion cubic meters a year.

President of the aerospace corporation, Lei Fanpei, said, "[Modifying the weather in Tibet] is a critical innovation to solve China’s water shortage problem. It will make an important contribution not only to China’s development and world prosperity, but also the well being of the entire human race."

China has used weather altering technology before, most famously to keep the opening ceremony of the 2008 Olympics Games free from rainfall. In that case, rockets loaded with silver iodine were fired at clouds to ensure they dropped precipitation before they reached the capital.

The relatively low-tech nature of the Tibetan Plateau project means the costs are kept down, while still being able to get high quality, accurate data. All communications and other electronic equipment of the proposed system is powered by solar energy. Each chamber is able to be monitored and controlled by a smartphone app. Many of the details of the project are being kept under high security and no launch date is yet known.

The chambers’ operations will be guided by precise real-time data collected from a network of 30 small weather satellites monitoring monsoon activities over the Indian Ocean. The ground-based network will also employ other cloud-seeding methods using planes, drones, and artillery to maximize the effect of the weather modification system.

Tibetan plateau has huge glaciers and massive underground reservoirs. The area is often referred as Asia’s water tower, and it affects directly to most of the continent’s biggest rivers, including the Yellow River, Yangtze, Mekong, Salween, and Brahmaputra. The rivers are of extreme importance to almost half of the world's population.

Despite the water-rich air currents traveling through plateau every day, it is one of the driest places on Earth. Most areas receive less than 100 mm (3.93 inches) of rain a year. An area that sees less than 250 mm (9.8 inches) of rain annually is defined as a desert by the US Geological Survey. 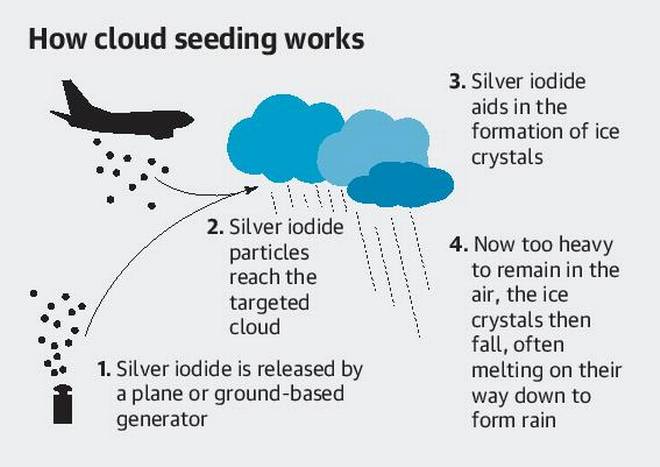 The government of Assam, northeast India, has raised concerns after reports of weather modification system surfaced on March 26, 2018. The system has triggered fears of more devastating floods in the downstream areas of Tibetan plateau area.

Every year, flooding of Brahmaputra river and its tributaries in Assam kill hundreds of people, destroy houses and farmlands. It is now feared, that more rain at the source of the Brahmaputra would mean even greater degree of devastation.

The riparian states of Assam and Arunachal Pradesh are suffering because of China's "mindless interference" with the natural ecosystem in the Tibetan plateau, State finance minister Himanta Biswa Sarma said.

"Now, reports of this new system have come as a shocker. China is already giving us so much trouble and we are witnessing floods every year. If this new system is introduced, there will surely be huge ramifications. I will request the MHA to look into the matter and coordinate with Chinese authorities. The Centre should ask China not to interfere with the natural ecosystem in the Tibetan plateau," he added, as reported by Times of India.

Sarma, who had earlier raised the issue of China stopping the sharing of hydrological data of the Brahmaputra with India, said, "At some point, the Centre will have to approach the UN or an international agency for a joint inspection of the kind of interference by China. You never know what more the Chinese are doing or have already done."