Geophysicists from the Southern Methodist University in Dallas found that decades of oil production activity in Texas have destabilized localities of an area about 10 000 km2 (4 000 mi2) populated by small towns, roadways and a vast network of oil and gas pipelines and storage tanks.

The same team of scientists that previously reported the rapid rate at which Texas sinkholes are expanding and new ones are forming has now discovered that various locations in large portions of four Texas counties are also sinking and uplifting. According to their study, two giant sinkholes near Wink, Texas, may just be the tip of the iceberg and new ground movement is extending at an alarming rate far beyond the infamous sinkholes.

"The ground movement we're seeing is not normal. The ground doesn't typically do this without some cause," said geophysicist Zhong Lu, a professor in the Roy M. Huffington Department of Earth Sciences at SMU and a global expert in satellite radar imagery analysis.

"These hazards represent a danger to residents, roads, railroads, levees, dams, and oil and gas pipelines, as well as potential pollution of ground water," Lu said. "Proactive, continuous detailed monitoring from space is critical to secure the safety of people and property." 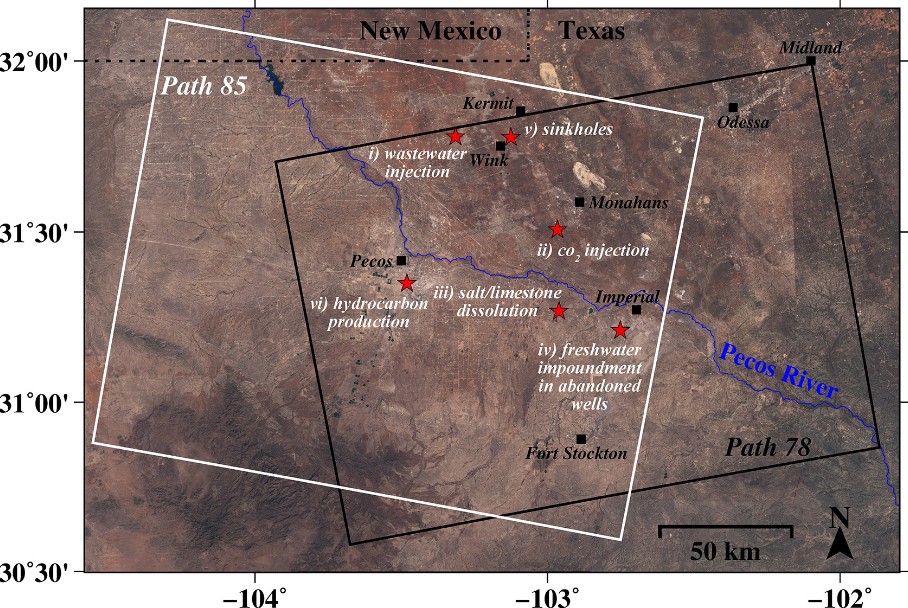 The scientists made the discovery with analysis of medium-resolution (4.5 to 20 m / 15 feet to 65 feet) radar imagery taken between November 2014 and April 2017. The images cover portions of four oil-patch counties where there's heavy production of hydrocarbons from the oil-rich West Texas Permian Basin.

The imagery, coupled with oil-well production data from the Texas Railroad Commission, suggests the area's unstable ground is associated with decades of oil activity and its effect on rocks below the surface of the earth.

The SMU researchers caution that ground movement may extend beyond what radar observed in the four-county area. The entire region is highly vulnerable to human activity due to its geology, water-soluble salt and limestone formations, and shale formations, they say.

"We're fairly certain that when we look further, and we are, that we'll find there's ground movement even beyond that," said study co-author and research scientist Jin-Woo Kim, a research scientist in the SMU Department of Earth Sciences. "This region of Texas has been punctured like a pin cushion with oil wells and injection wells since the 1940s and our findings associate that activity with ground movement."

The study is among the first of its kind to identify small-scale deformation signals over a vast region by drawing from big data sets spanning a number of years and then adding supplementary information.

The researchers found a significant relationship between ground movement and oil activities that include pressurized fluid injection into the region's geologically unstable rock formations. Fluid injection includes waste saltwater injection into nearby wells, and carbon dioxide flooding of depleting reservoirs to stimulate oil recovery.Injected fluids increase the pore pressure in the rocks, and the release of the stress is followed by ground uplift.

As might be expected, the most significant subsidence is about 800 m (0.5 miles) east of the huge Wink No. 2 sinkhole, where there are two subsidence bowls, one of which has sunk more than 39 cm (15.5 inches) a year. The rapid sinking is most likely caused by water leaking through abandoned wells into the Salado formation and dissolving salt layers, threatening possible ground collapse.

In the vicinity of 11 CO2 injection wells nearly 11 km (7 miles) southwest of Monahans, the radar analysis detected surface uplift of more than 25.4 mm (1 inch). The wells are about 750 to 815 m (2 460 to 2 657 feet) deep. As with wastewater injection, CO2 injection increased pore pressure in the rocks, so when stress was relieved it was followed by uplift of about 25.4 mm (1 inch) at the surface.

The researchers also looked at an area 6.9 km (4.3 miles) southwest of Imperial, where significant subsidence from fresh water flowing through cracked well casings, corroded steel pipes and unplugged abandoned wells has been widely reported. Water there has leaked into the easily dissolved Salado formation, created voids, and caused the ground to sink and water to rise from the subsurface, including creating Boehmer Lake, which didn't exist before 2003.

"Movements around the roads and oil facilities to the southwest of Imperial, Texas, should be thoroughly monitored to mitigate potential catastrophes," the researchers write in the study. 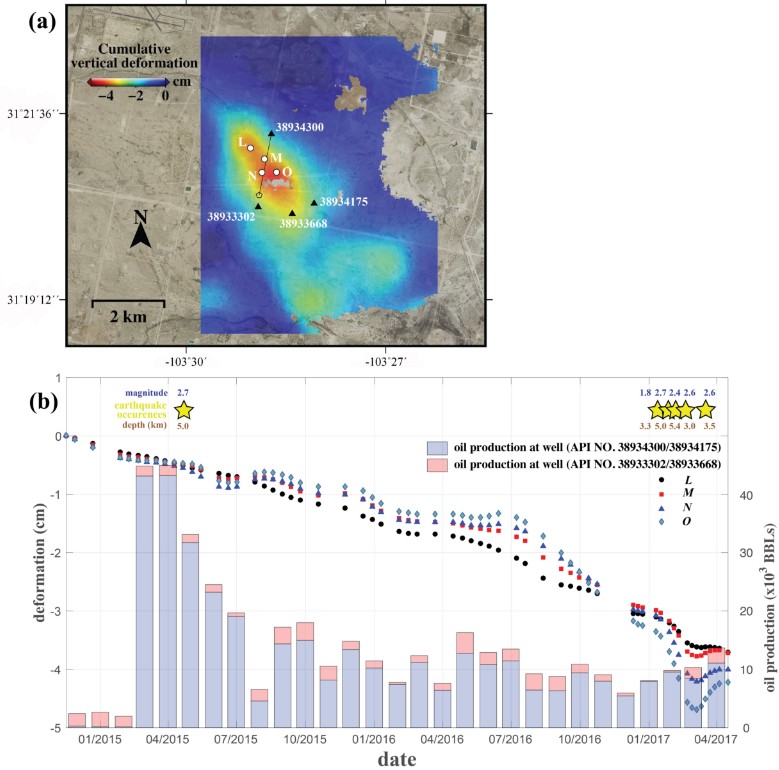 About 8.8 km (5.5 miles) south of Pecos, their radar analysis detected more than 25.4 mm (1 inch) of subsidence near new wells drilled via hydraulic fracturing and in production since early 2015. There have also been six small earthquakes recorded there in recent years, suggesting the deformation of the ground generated accumulated stress and caused existing faults to slip.

"We have seen a surge of seismic activity around Pecos in the last five to six years. Before 2012, earthquakes had not been recorded there. At the same time, our results clearly indicate that ground deformation near Pecos is occurring," Kim said. "Although earthquakes and surface subsidence could be coincidence, we cannot exclude the possibility that these earthquakes were induced by hydrocarbon production activities."

Kim stated the need for improved earthquake location and detection threshold through an expanded network of seismic stations, along with continuous surface monitoring with the demonstrated radar remote sensing methods.

"This is necessary to learn the cause of recent increased seismic activity," he said. "Our efforts to continuously monitor West Texas with this advanced satellite technique can help sustain safe, ongoing oil production."

West Texas’ Permian Basin, consisting of ancient marine rocks, is underlain by water-soluble rocks and multiple oil-rich formations. In the region that is densely populated with oil producing facilities, many localized geohazards, such as ground subsidence and micro-earthquakes, have gone unnoticed. Here we identify the localized geohazards in West Texas, using the satellite radar interferometry from newly launched radar satellites that provide radar images freely to public for the first time, and probe the causal mechanisms of ground deformation, encompassing oil/gas production activities and subsurface geological characteristics. Based on our observations and analyses, human activities of fluid (saltwater, CO2) injection for stimulation of hydrocarbon production, salt dissolution in abandoned oil facilities, and hydrocarbon extraction each have negative impacts on the ground surface and infrastructures, including possible induced seismicity. Proactive continuous and detailed monitoring of ground deformation from space over the currently operating and the previously operated oil/gas production facilities, as demonstrated by this research, is essential to securing the safety of humanity, preserving property, and sustaining the growth of the hydrocarbon production industry.