An intensifying tropical low north of the Tiwi Islands is moving southeast across the Arafura Sea and is expected to turn south towards the north coast of the Top End on Friday. This system is expected to reach Category 1 tropical cyclone intensity on March 16 and be named Marcus. This will be the 8th named storm of the 2017/18 Australian region tropical cyclone season.

The low is expected to reach tropical cyclone Category 1 intensity Friday evening (local time), BOM warns. The system will then turn towards the southwest during Saturday and move into the Timor Sea late on Saturday or early Sunday. 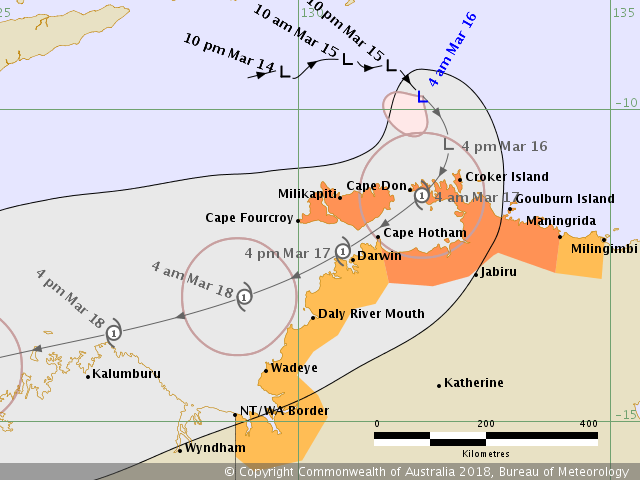 This storm could bring wind gusts of up to 125 km/h (77.6 mph) and heavy rainfall to areas from Milingimbi to Daly River Mouth, including the Tiwi Islands and Darwin, BOM said.

Impacts on Darwin are expected late Friday evening with the potential for up to 200 mm (7.8 inches) of rainfall in 24 hours. 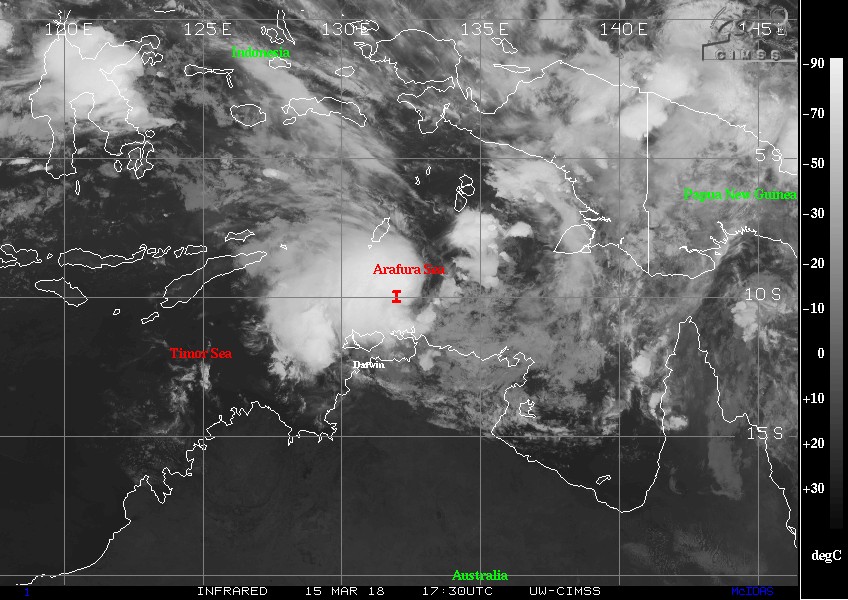 "Gale force winds and heavy rain at this time of year could result in some trees coming down, and possible disruption to power, telecommunications and transport routes," BOM's Acting Northern Territory Manager Jude Scott said.

Residents in affected areas should listen to the advice of emergency services and follow preparation guidelines set out by the Northern Territory Emergency Service.

A storm tide between Milikapiti and Maningrida, including the Van Diemen Gulf, is expected as the cyclone center crosses the coast tonight. Tides are likely to rise significantly above the normal high tide, with damaging waves and dangerous flooding Friday night and into Saturday morning.

Heavy rain is expected to develop along the north coast later on Friday, then extend into the northwest Top End on Saturday.

NTES advises residents from Cape Hotham to Maningrida, including the Tiwi Islands:

NTES advises communities from WA/NT Border to Cape Hotham and Maningrida to Milingimbi:

Further advice on cyclone emergencies is available at www.securent.nt.gov.au

Please ensure that friends, family and neighbors have heard and understood this message, particularly new arrivals to the area.