A very large, slow-moving fireball meteor was observed over the United Kingdom at 17:33 UTC on December 31, 2017. The International Meteor Organization (IMO) received over 400 reports within 2 hours and the count now stands at 801. The event was as seen from northern Scotland to southern England, UK.

The object was green and red in color and was traveling east to west from the North Sea toward Sunderland and Carlisle for more than 10 seconds. 11 people reported delayed sound associated with the event, 11 a concurrent sound and 255 reported fragmentation.

"The object fragmented in smaller parts at the end of its luminous path, before vanishing," IMO's Karl Antier said. 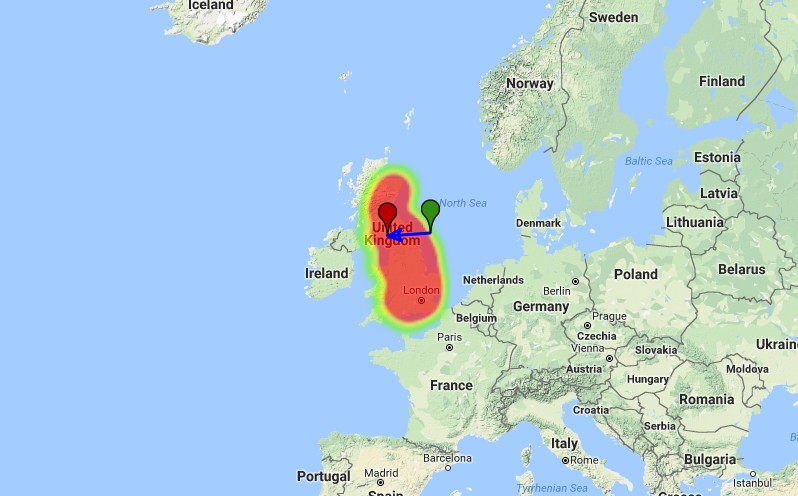 Fireball over the United Kingdom on December 31, 2017 – HeatMap. Credit: IMO

"Rough automatic analysis of the reports received until now show the meteor started being luminous 80 km (50 miles) offshore Hartlepool, and traveled from east to the west to disappear 100 km (62 miles) onshore and 20 km (12 miles) South of England/Scotland border, halfway between Penrith and Carlisle (Cumbrie county). At the end of its luminous path, the meteoroid was nearly 50 km (31 miles) in altitude, which gives no chances for any meteorites to reach the ground," Antier added.