A strong phreatic eruption started at Mount Agung, Bali, Indonesia at 09:30 UTC (17:30 WIB) on Saturday, November 25, 2017. This is the second eruption of this volcano since Tuesday, November 21. Although significantly stronger, the Alert Level remains at second highest (III / standby) and the Aviation Color Code at Orange.

Today's eruption is more than twice as high as last Tuesday's. At 15:00 UTC, ash column was rising up to 6 km (20 000 feet) above sea level and drifting W/SW, according to the Darwin VAAC.

There have been no new evacuations, officials said and urged residents to remain calm and follow official updates. 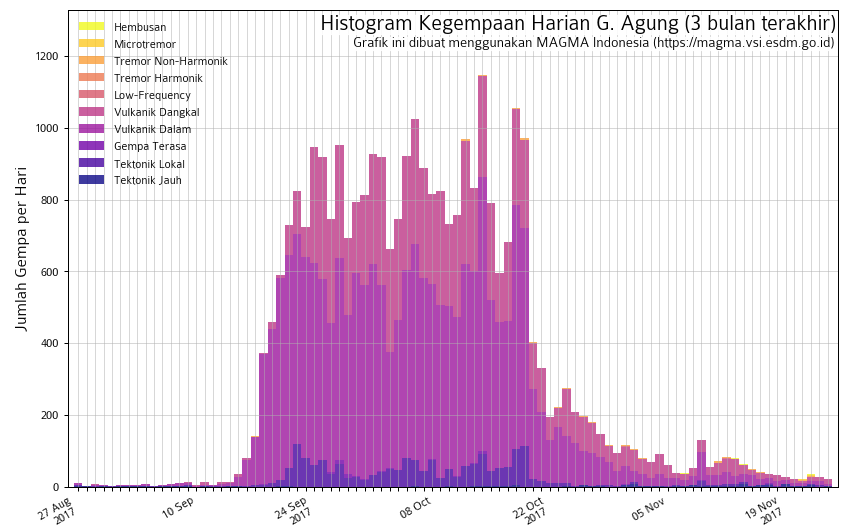 "The alert level of the volcano has not been raised, it remains at level 3," said BNPB spokesman Sutopo Purwo Nugroho, adding, at 14:00 UTC, that Ngurah International Airport is still safe and that ash cloud is not affecting its flight paths.

However, several flights have already been canceled or diverted and people intending to travel to Bali and from Bali should check the airline's website.

Communities around Agung and climbers/visitors/tourists are asked not to approach the volcano and do not enter an area within a radius of 6 km (3.7 miles) from the crater and as far as 7.5 km (4.6 miles) to the NNE and SSW.

Mount Agung’s last major eruption was in 1963. It lasted for more than a year and is considered one of the world's largest eruptions of the 20th century. Nearly 1 600 people were killed.