Typhoon "Damrey" hit southern Vietnam on Saturday, November 4, 2017 as the strongest storm to hit that part of the country in 16 years. At least 27 people died and 22 are still missing, as of Sunday morning, November 5.

Damrey made landfall near Nha Trang as a Category 2 hurricane equivalent on the Saffir-Simpson Hurricane Wind Scale. This region, normally spared typhoons that typically hit further not, hasn't experienced a typhoon this strong since Lingling of November 2001.

The worst affected in terms of winds was Nha Trang and its surrounding communities. In terms of heavy rain, flooding and landslides, the area most affected expanded north across central Vietnam and into Laos. Nearly 255 mm (10 inches) of rain was measured in Qui Nhon within 24 hours (ending Saturday evening, local time). During the same period, 130 mm (5.10 inches) was recorded in Nha Trang and 102 mm (4.02 inches) in Da Nang.

Damrey's strong winds and heavy rain caused widespread power outages, damaged more than 40 000 homes and destroyed at least 600 others, and caused extensive damage to region's rice fields and other crops. At least 228 fishing boats were sunk or damaged, according to the Vietnam Disaster Management Authority.

As of Sunday morning, November 5, there are 27 confirmed deaths and 22 missing people. Most deaths occurred in coastal Khanh Hoa province where heavy rain and winds of 130 km/h (81 mph) tore through the region. 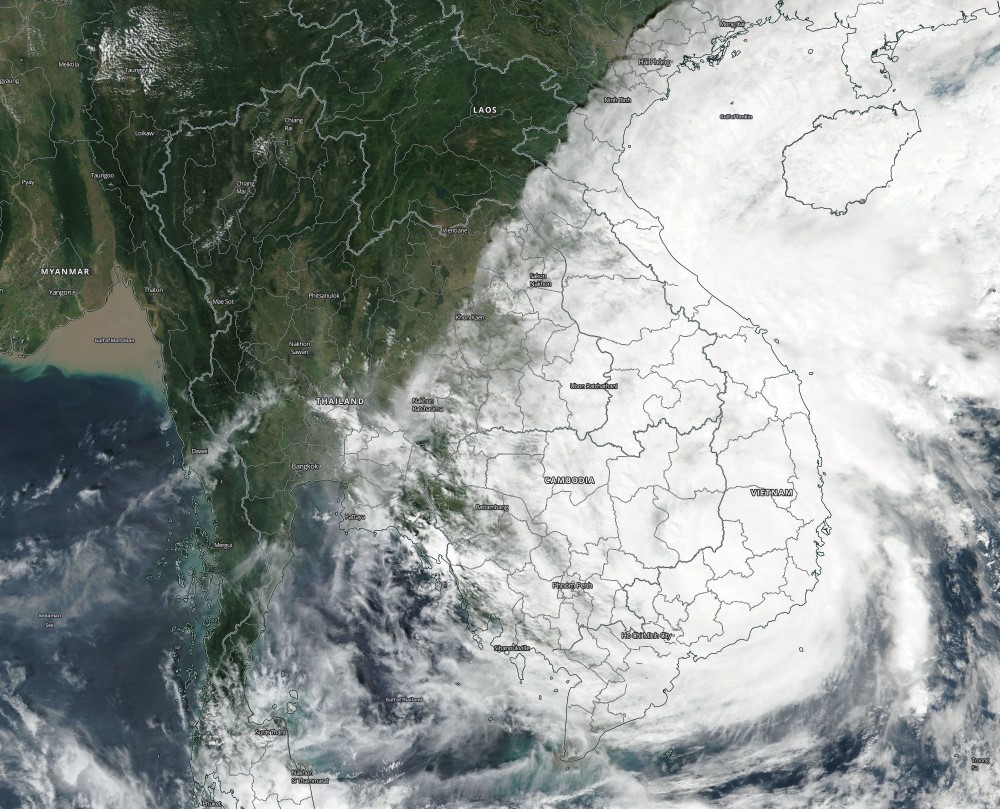 Heavy rains are expected to last until Tuesday, November 7 including in the central resort city of Danang, just days before the start of Apec, an economic summit attended by Presidents Donald Trump, Vladimir Putin of Russia and Xi Jinping of China, among others.

At least 49 people have died after Typhoon "Damrey" slammed into central Vietnam, disaster officials said Monday, November 6, as heavy flooding cast doubt on a planned retreat for APEC leaders’ spouses to the ancient town of Hoi An, AFP reports.

"We’re facing a major threat in all the affected areas, all the lakes and rivers are full," Agriculture and Rural Development Minister Nguyen Xuan Cuong said at an emergency meeting Sunday, according to state-controlled VNExpress.

He said flood levels are close to surpassing records set 1997.

Some 30 000 people were evacuated and around 116 000 properties have been submerged or damaged since the typhoon hit Saturday.

The death toll from typhoon downpours and floods wreaking havoc along Vietnam's south-central coast has risen to 69 and the number of missing people to 30, authorities said Tuesday. More than 100 000 houses nationwide are still under water.

Authorities warned that raging rivers were filling reservoirs to near-capacity in central and southern provinces, with rain still pelting down in some areas.

The country has reported at least 240 people dead or missing in floods and landslides since the beginning of the year. (AFP)

The death toll has risen to 89 the government said. There are still 18 people missing.

An official from the National Committee for Search and Rescue Operations said soldiers, police, militiamen, and villagers have been mobilized to search for the missing. Those who perished were killed by collapsing houses, washed away by floods or drowned in capsized ships.

The official, who spoke on condition of anonymity because he was not authorized to speak to the media, said the storm also injured 174 others.

Weather forecasters said water levels in most rivers in the region were declining, but the Vietnam Disaster Management Authority said parts of a main highway were still covered with up to a meter (three feet) of water, disrupting traffic. (Outlook India)

The death toll has risen to 106, the number of missing to 26 and the number of injured to 197, Vietnam's Search and Rescue Committee said.

Water released from full reservoirs caused many areas to remain flooded, especially in the lowland of Hue province, where locals predicted the inundation would last for at least another 10 days.

Tropical Storm "Haikui" is moving toward already affected central Vietnam and is expected to strengthen into a typhoon before making landfall there, sometime on November 14 or 15 November. This may further exacerbate humanitarian needs.