A very bright fireball streaked across the night sky over British Columbia, Canada at 05:11 UTC on September 5, 2017 (22:11 PDT, September 4). The event lasted about 10 seconds and was followed by a sonic boom.

The American Meteor Society (AMS) received 224 reports by 21:49 UTC. The fireball was primarily seen above the province of British Columbia, but eyewitnesses from Alberta and Saskatchewan in Canada and Washington, Idaho and Montana in the United States also reported seeing it.

Witnesses described seeing a flaming object turn the sky an eerie green before fading into dark orange as it approached the horizon. 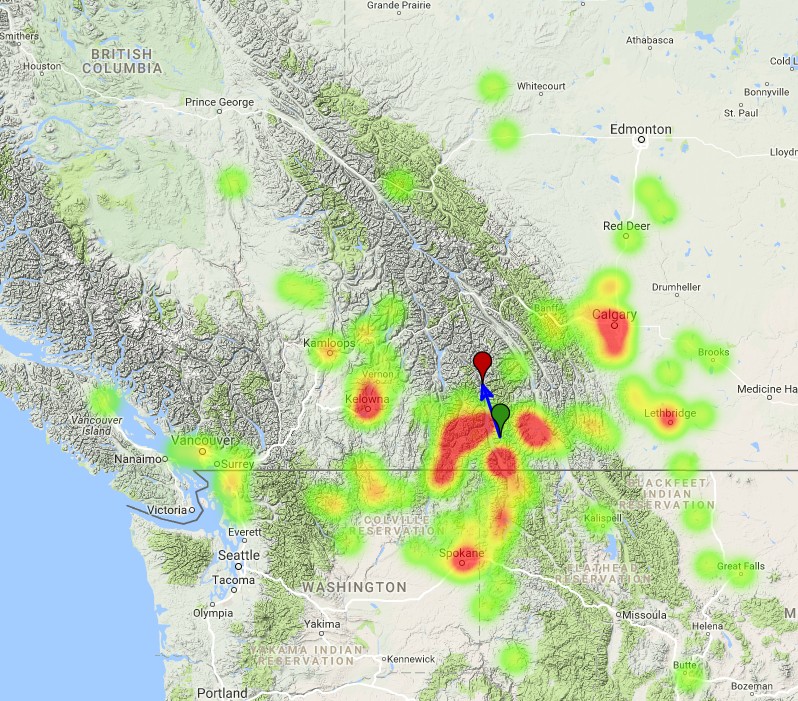 According to AMS' latest estimated trajectory, the fireball traveled in a southeast to northwest direction entering the atmosphere near the small town of Boswell and terminating near Meadow Creek (about 70 km / 43 miles north of Nelson), British Columbia.

There are some reports that parts of the object may have hit the ground, but this has not been confirmed and a number of landing locations conflicted with others, CBC reported.

Cpl. Dan Moskaluk of the Southeast District RCMP (Royal Canadian Mounted Police) said some of their on-duty and off-duty officers saw the object as well. "It appears similar to what we've seen in the past when a meteor falls to the ground. It will be difficult to establish where it landed due to the fact the skies are still smoke-filled from B.C.'s worst ever fire season," Moskaluk added.

Jaymie Matthews, a professor of astronomy and astrophysics at the University of British Columbia said this was an exceptional circumstance: mid-evening at the end of a holiday weekend so people were still out and about to experience it.

Matthews says, judging by the amateur video and eyewitness reports, the object was probably the size of a piece of furniture, like a couch.

"While there is a good chance there will be some debris from the event, the fact the pieces are too small to leave a crater and the particular terrain in the fireball's trajectory is so rugged, those space fragments would be difficult to spot."