Some 120 000 people were ordered or advised to evacuate on Sunday, July 23, 2017 after record-breaking rain hit Japan's Akita Prefecture, causing floods and landslides.

According to The Japan Times, there have been no injuries reported so far, but JMA warned of more flooding as 'an active rain front that brought record rain to parts of Akita decided to park itself over the Tohoku region.' 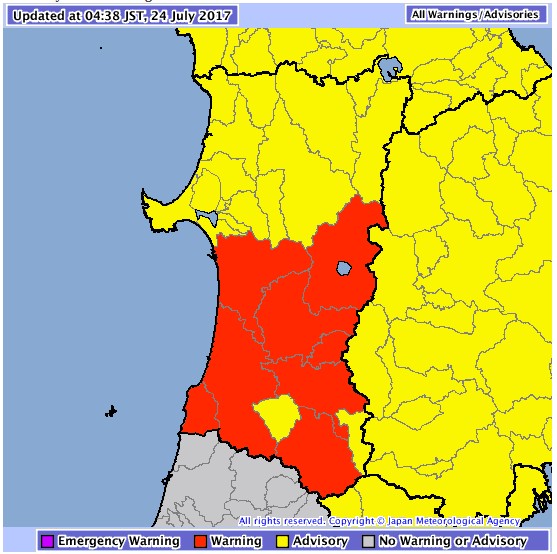 24 000 people from the cities of Yurihonjo, Daisen and Senboku, as well as the town of Misato were ordered to evacuate after it was reported that houses had been flooded and landslides had struck various parts of the prefecture. The storm caused flooding along stretches of the Omono River, while several other rivers were deemed at risk of overflowing their banks. Another 96 000 people in six cities and three towns were advised to evacuate and urged to prepare for floods and landslides.

According to the JMA, one part of the city of Akita had received a record 340 mm (13.4 inches) of rainfall during a 24-hour period that ended at 07:00 JST, Sunday. Record amounts of precipitation were also recorded in several other parts of the prefecture, with some areas breaking their monthly rainfall records for July, it said.

In Daisen, an apparent landslide sent mounds of dirt, stones and other debris down onto a 20-meter (65 feet) stretch of Route 105.

"The height of the accumulated soil reached 3 m (9.8 feet) at one point. We’re looking into more detail about what happened,” a prefectural official said.