At least 11 people have been killed and 14 are still missing as of late Friday, July 7, 2017, after three days of extremely heavy rainfall caused massive floods and landslides in parts of southwest Japan. The rain is still falling throughout the region and many parts of Kyushu are under heavy rain (ground-loosening) warnings. The hardest hit prefectures are Fukuoka and Oita.

The rainstorm was caused by a low-pressure system over the Pacific Ocean that brought warm, moist air into Japan's seasonal rainy front, and followed a recent deluge from Tropical Storm "Nanmadol."

According to the Japan Meteorological Agency (JMA), parts of Fukuoka Prefecture were hit by 600.5 mm (24 inches) of rain in 48 hours between 01:40 UTC on Wednesday, July 5 and Friday, July 7. This is more than 1.5 times the usual amount of rain this region receives during the month of July. However, some areas received a staggering 774 mm (30.4 inches) of rain within just 9 hours on Wednesday, more than 2 times for the entire month of July.

By 10:30 JST (01:30 UTC) on July 6, there were 2 confirmed deaths, 18 people missing and about 450 000 people (close to 186 000 homes) ordered to evacuate. The JMA urged “utmost vigilance” in Fukuoka and Oita, the worst hit regions, saying a once-in-decades disaster is possible as atmospheric conditions remain unstable.

As of late July 7, the death toll has risen to 11 while 14 people are still unaccounted for. More than 12 000 personnel including Self-Defence Forces troops, police officers, and firefighters are participating in search and rescue efforts.

The evacuation orders remained in effect for about 191 000 in Fukuoka, Oita and Kumamoto prefectures, with rain expected to continue through Saturday, The Japan Times reports. 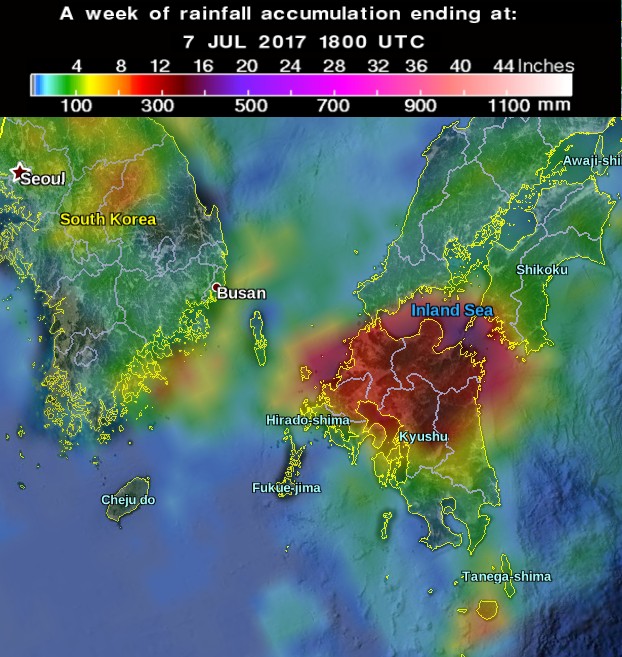 Although emergency warnings have been lifted, JMA urges residents to stay vigilant for mudslides.