A massive wildfire is raging in southern Utah, forcing authorities to issue evacuation orders for at least 1 500 people. Since it started on June 17, the fire has rapidly spread to more than 17 000 hectares (42 000 acres), destroying on its way more than a dozen homes. This is currently the largest wildfire burning in the United States. Estimated containment day is July 15, 2017.

The fire started around midday Saturday, June 17, and grew very quickly through dense timber on lands administered by Brian Head Town, Iron County, in cooperation with the Utah Division of Forestry, Fire, and State Lands. Named Brian Head Fire, it has since burned on to lands managed by Dixie National Forest and Color Country District Bureau of Land Management.

A Red Flag Warning is in effect for southwest Utah through 22:00 MDT, June 26, conditions are ideal for wildland fire combustion, and rapid spread.

Southwest winds 16 – 40 km/h (10 – 25 mph) with gusts to 56 km/h (35 mph) are expected today, especially over ridges and around the western slopes of the Tushar Mountains and Pahvant Range. Combined with low humidity (10 – 15%), these winds will cause critical fire weather conditions today.

In addition, isolated thunderstorms may also increase the threat for new starts and locally gusty and erratic winds. 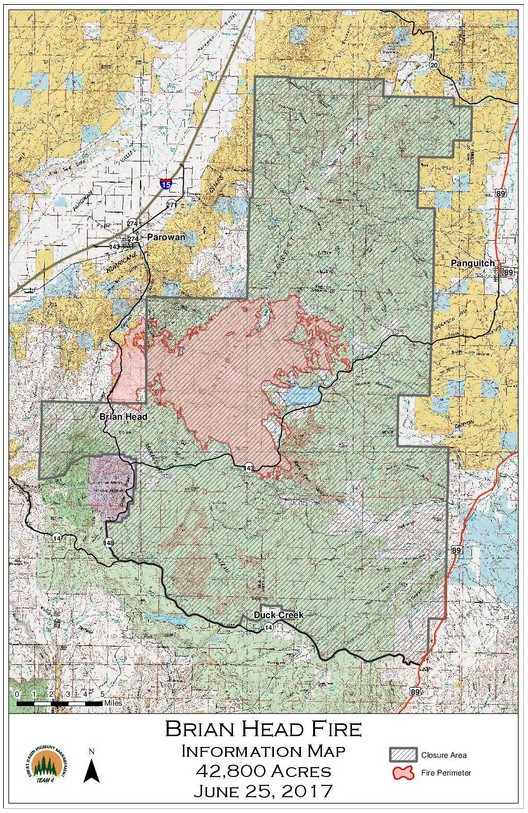 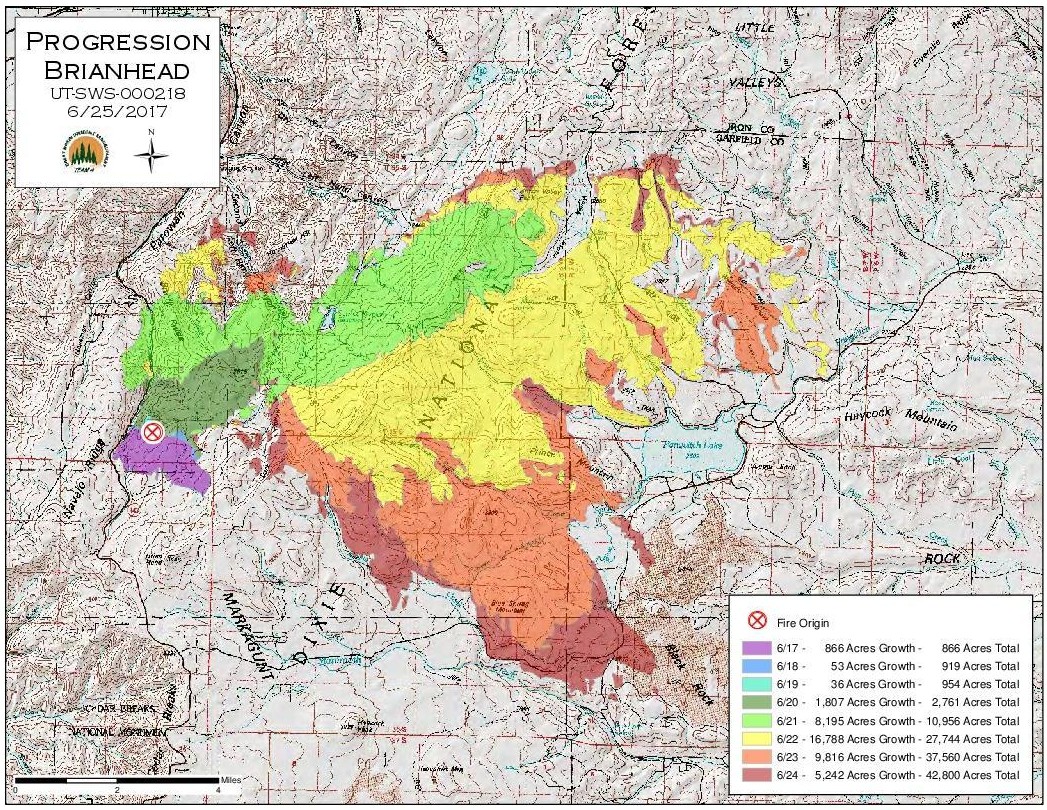 With the winds forecast to come from the southwest again Monday afternoon, fire managers are anticipating spread down Horse Valley. To counter this spread, a dozer constructed indirect fireline, away from the current fire perimeter, across the valley.

On Monday, crews will continue to secure the southern perimeter of the fire to slow its progression toward Mammoth Creek. They will also be scouting out ahead of the fire to the north and south to be prepared if the fire activity picks up and moves the fire in those directions. A Type 1 Incident Management Team will assume control of the eastern half of the fire, while the Type 2 Team will remain in Parowan.

Highway 143 is closed from the cemetery in Parowan to milepost 50 outside of Panguitch while the Mammoth Creek Road is closed at the junction with Highway 143. Additionally, the north side gate of 143/148 is closed and the Dixie National Forest has expanded its area closure.

The fire is producing heavy smoke which is currently heading to the east and southeast. All people in a smoky area (except firefighters or emergency personnel) should avoid strenuous work or exercise outdoors. They should avoid driving whenever possible. If driving is necessary, people should run the air conditioner on the “recycle” or re-circulate mode to avoid drawing smoky air into the car.

Population affected by the smoke should be aware that the effects of smoke range from eye and respiratory tract irritation to more serious disorders, including reduced lung function, bronchitis, exacerbation of asthma and heart failure, and premature death.

Studies have found that short-term exposures (i.e., days to weeks) to fine particles, a major component of smoke, are linked with increased premature mortality and aggravation of preexisting respiratory and cardiovascular disease.

Fine particles are respiratory irritants, and exposures to high concentrations can cause a persistent cough, phlegm, wheezing, and difficulty breathing.

Although the official cause of the fire is still under investigation, Gov. Gary Herbert stated last week that experts determined a weed torch sparked the fire.