Brutal amounts of rainfall hit northern Taiwan today, June 2, 2017, killing at least 1 person, leaving 2 missing and injuring more than 20. Heavy rain toppled electricity pylon near New Taipei's Jinshan Nuclear Power Plant, resulting in the automatic shutdown of the plant. The rains have since moved toward the center and south of the island and are expected to continue through the weekend.

Some areas of the affected region saw water surging into cars, homes and businesses after more than 600 mm (23.6 inches) of rain fell in under 11 hours. Channel News Asia reported the body of a female motorcyclist was found after being washed into a ditch in New Taipei City, one of the worst hit areas.

According to the National Fire Agency, two people, one from New Taipei City and the other from the city of Keelung are missing after being swept off, while a road bridge in the area was smashed in half by a swollen river. At least 20 people were hurt in the deluge, including a driver injured when his truck overturned and another man hurt after being buried in a mudslide.

Around 15 hikers were also stranded on a mountain in central Miaoli because of a surging river, but were thought to be unharmed and with sufficient supplies. At a kindergarten in Taipei, 53 children had to be evacuated as floodwater poured in, local media said. More than 300 flights were delayed at Taiwan's Taoyuan International Airport.

Taipower said the 345-kV tower fell at 10:31 local time, resulting in the automatic shutdown of the New Taipei's Jinshan Nuclear Power Plant reactor No. 2 – a safety mechanism activated whenever a reactor cannot transmit power, The China Post reported. Local media sources indicated that neither the reactor nor the generator was damaged during the incident. However, for safety reasons, the restarted reactor will remain running at 75% capacity – the level at which it was running when the shutdown occurred – until it runs out of fuel, which is estimated to be June 10 or 11.

The lane is next to the river, so it's very dangerous.#Taiwan #flood #flooding #floodwater pic.twitter.com/pygFCENwCl 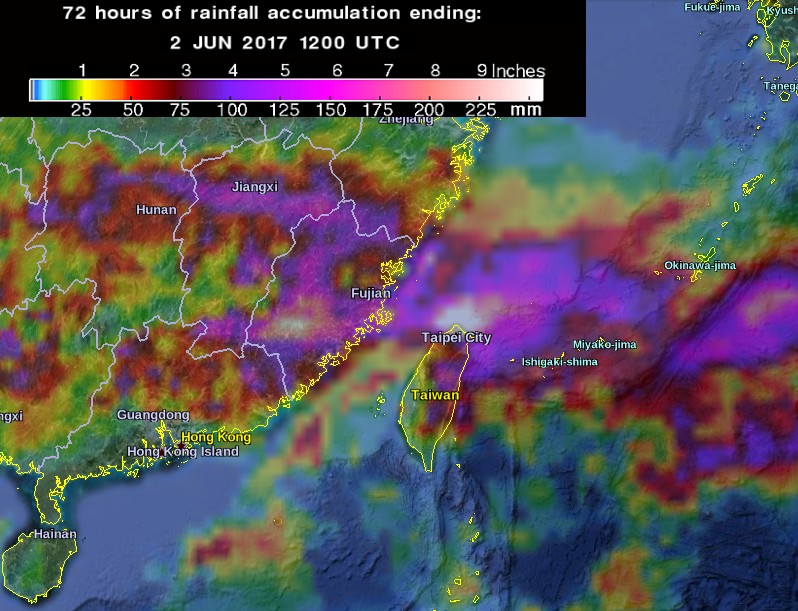 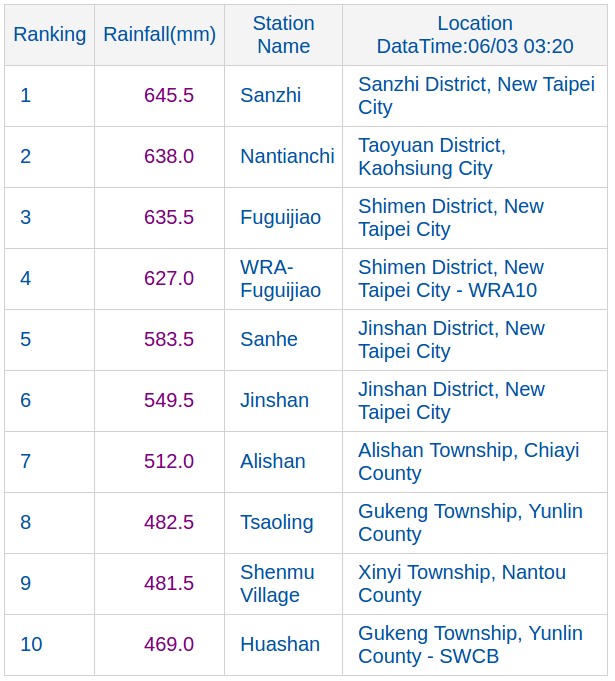 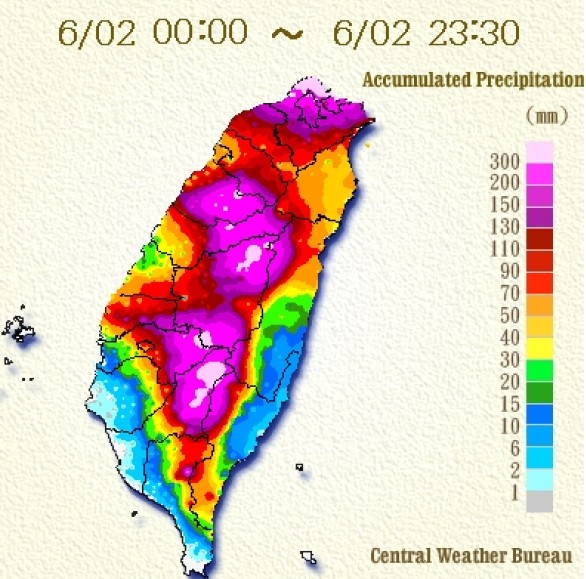 According to AccuWeather Meteorologist Adam Douty, moisture from what was once Tropical Cyclone "Mora" moved along the Mei-yu front across southeastern China and Taiwan, leading to the very heavy rainfall.

"The Mei-yu front is a semi-stationary boundary that forms during the late spring and summer across southeastern Asia," he said.

Douty added that this front is notorious for triggering torrential rainfall and that he expects additional rounds of rainfall along the front to exacerbate the flood risk into this weekend.

The heaviest downpours are likely to focus on southern Taiwan on Saturday before spreading back to the north on Sunday.

If you love the rain then #Taipei is the place. "I'm singing in the rain" #Rainyday #NewTaipeiCity #Taiwan #FridayFeeling #Thunderstorms pic.twitter.com/wxWqXO4kuX