Cyclone "Mora" has made landfall at 00:00 UTC (06:00 local time) on May 30, 2017, between the fishing port of Cox's Bazar and the city of Chittagong, with winds of up to 117 km/h (73 mph). Authorities raised the highest number 10 weather danger alert for people in the coastal districts of Bangladesh as the storm approached and evacuated over 500 000 people. Initial reports mention at least 6 casualties and tens of thousands damaged homes.

Tropical Cyclone "Mora" (02B) formed in the Bay of Bengal on May 28, 2017, as the second named storm of the 2017 North Indian Ocean tropical cyclone season. Under the influence of the precursor low of Mora, it strengthened the arrival of monsoon which caused heavy disaster in Sri Lanka and Andaman islands with at least 180 fatalities.

Under the influence of the cyclone, low-lying areas of the coastal districts and their offshore islands were expected to be inundated by a storm surge 1.2 – 1.5 m (4 – 5 feet) high above normal astronomical tide, the Bangladesh Meteorological Department (BMD) said. All fishing boats and trawlers in the North Bay and far out in the sea have been asked to take shelter until further notice. 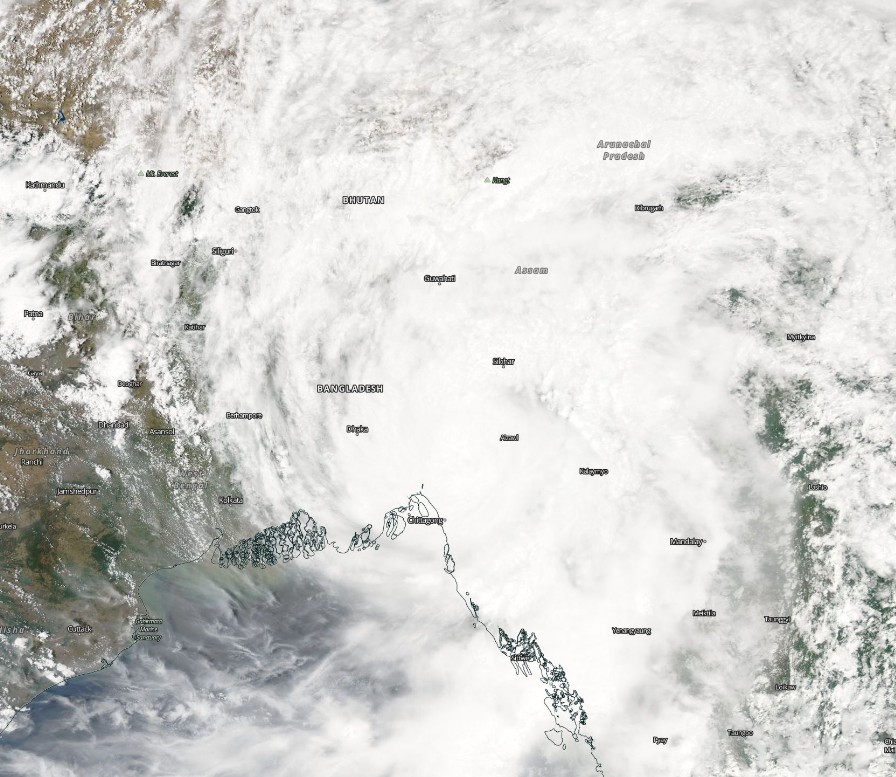 Mora started crossing the coast between Cox's Bazar and the city of Chittagong at 00:00 UTC on May 30 (06:00 local time) with winds of up to 117 km/h (73 mph). This placed Mora on the upper edge of Category 1 hurricane equivalent on the Saffir-Simpson hurricane wind scale.

At least 2.5 million people in Bangladesh are at risk coming in the way of the cyclone, while 11.3 million are expected to be affected. Heavy rain will continue as the cyclone tracks inland toward India, which could cause flooding and mudslides across Bangladesh, western Myanmar and northeast India. 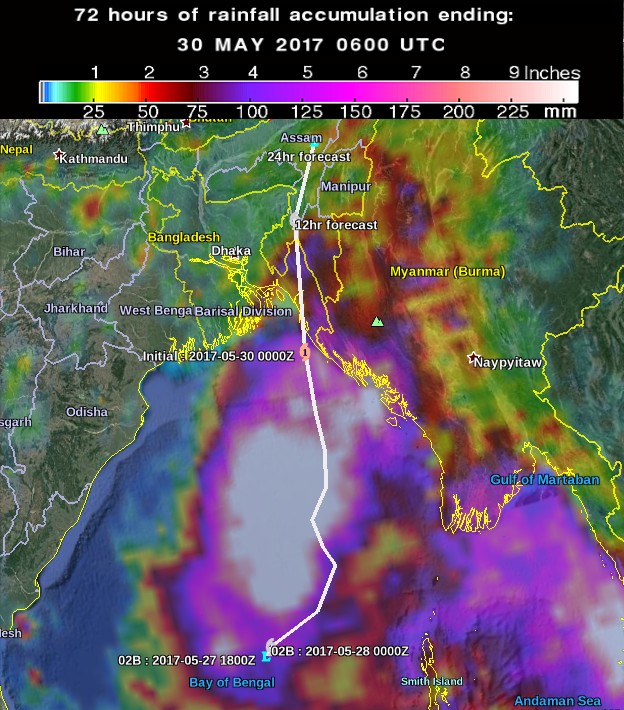 According to initial reports, at least 6 people have been killed as Mora made landfall, most of them by falling trees. One of them died of a heart attack.

The cyclone wreaked havoc in camps housing some 200 000 Rohingya refugees who are living in makeshift homes after fleeing violence in neighboring Myanmar. The damage to the camps was extensive and there had been no attempt to evacuate them, media said.

"Nobody came to alert or evacuate us. When the storm came we rushed to local schools to take shelter," Mohammad Anam, a Rohingya who fled to Bangladesh last year told AFP.

An estimated 20 000 Rohingya houses were damaged, community leader Abdus Salam told AFP. "In some places, almost every shanty home made of tin, bamboo and plastic has been flattened," Salam added. "Some people were injured, but no-one is dead."

Away from the camps, authorities had evacuated more than 500 000 people to some 500 cyclone shelters as the storm approached.

Officials in Chittagong reported winds gusting up to 135 km/h (84 mph), and said low-lying coastal areas were flooded by a storm surge with 2 m (6.5 feet) high waves.

A clear picture of the damage and casualties is still not available due to poor communication with many affected areas, Bangladeshi officials told the BBC. In Myanmar, about 300 houses were damaged in Rakhine State but the extent was unclear, the government said.

Authorities in India have warned of heavy rain in the northeastern states of Tripura, Mizoram, Manipur, Nagaland and Arunachal Pradesh.