Nearly 200 people are dead or missing after very heavy monsoon rains caused severe floods and mudslides in several southern and western areas of drought-stricken Sri Lanka. Some areas reportedly received 12 months worth of rain within just 24 hours on Thursday, May 25 and Friday, May 26, 2017. The government has advised people living near swollen rivers and areas prone to landslides to evacuate their homes.

The Sri Lankan Department of Meteorology reported on Friday that Kukuleganga in Sri Lanka’s southwestern Kalutara District broke rainfall records with 553 mm (21.8 inches) of rain in 24 hours. 488.2 mm (19.2 inches) of rain was recorded in Ratnapura, the capital city of Sabaragamuwa Province, May 25 into 26. 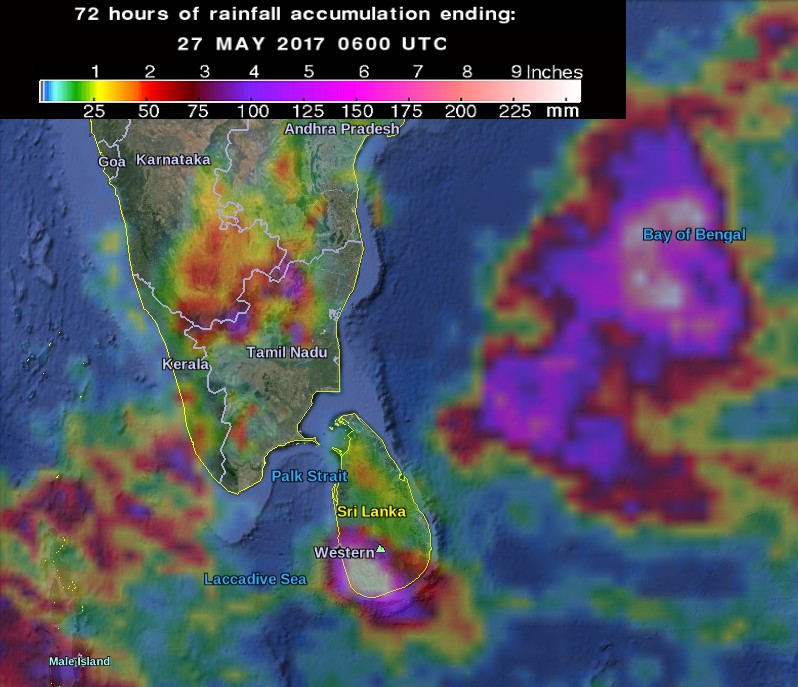 The country's Disaster Management Center (DMC) said that the Southwest Monsoon finally arrived and ended a prolonged drought that had threatened agriculture as well as hydropower generation. The reservoirs are now full but they are in danger of spilling over and flooding communities downstream, they warned.

According to official reports, over 500 000 people have been affected and more than 60 000 displaced, 100 have been killed and 91 are still missing as of early May 27, 2017. Most of the deaths have occurred due to mountainsides collapsing on homes, authorities say.

The worst hit were districts of Kalutara and Ratnapura.

Residents said there are more people trapped in interior villages where boats and helicopters have been unable to reach.

On Saturday, authorities issued fresh evacuation orders for those living downstream of two major rivers, citing a risk of flooding even though the heavy rains had subsided.

"Daily showers and thunderstorms are expected in the foreseeable future as the monsoon has advanced into Sri Lanka," AccuWeather Meteorologist Brett Rathbun said. The heaviest rainfall will continue to focus on southwestern Sri Lanka through at least next week.

Due to heavily deforested land, mudslides have become common during the monsoon season in Sri Lanka.