A powerful explosive eruption started at Bogoslof volcano, Alaska at 06:32 UTC on May 17, 2017, and lasted approximately 73 minutes. The Aviation Color Code was raised from Orange to Red. This is the first major eruption at Bogoslof volcano since March 8, 2017.

A pilot reported that the eruption has produced an ash cloud as high as 10.4 km (34 000 feet) above sea level, and the Worldwide Lightning Location Network has detected lightning associated with the cloud, the Alaska Volcano Observatory reports. 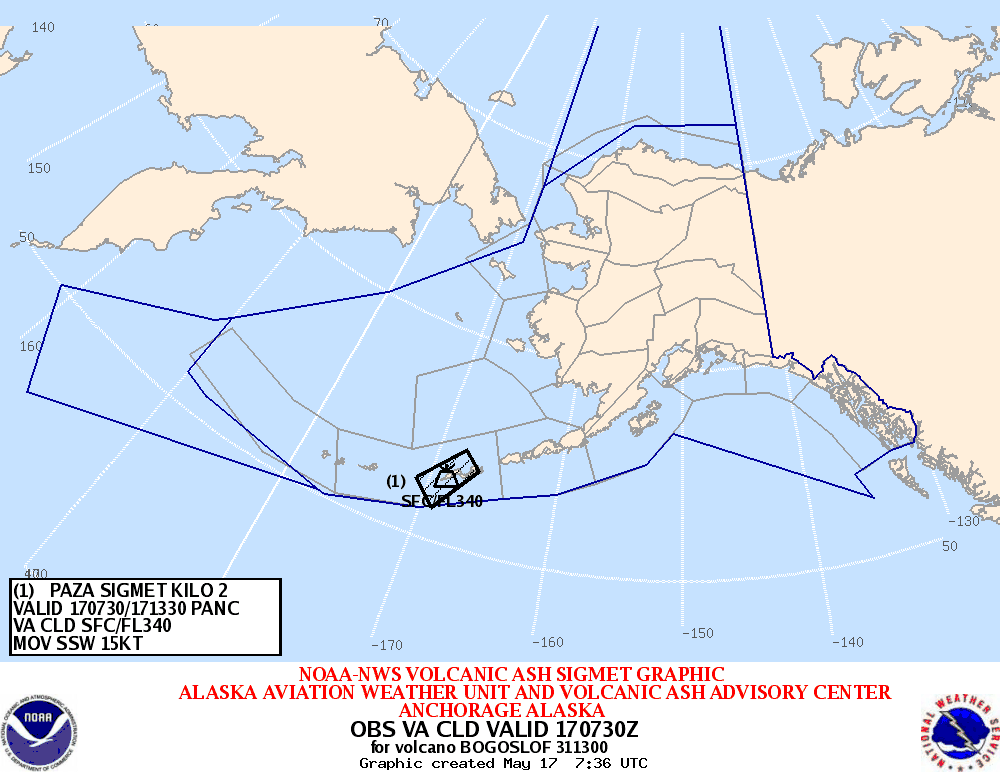 The explosive eruption lasted about 73 minutes, AVO reported at 08:48 UTC. Seismicity and infrasound as detected on neighboring islands has been quiet, it added.

The eruption produced an ash cloud that moved southwest along the edge of a mass of weather clouds as seen in satellite images.

The National Weather Service (NWS) has issued a Marine Weather Statement indicating trace amounts (less than 1 mm) of ashfall are possible in the region from Cape Sarichef to Nikolski.

"Bogoslof volcano remains at a heightened state of unrest and in an unpredictable condition. Additional explosions producing high-altitude volcanic clouds could occur at any time. Low-level explosive activity that is below our ability to detect in our data sources may be occurring. These low-level explosions could pose a hazard in the immediate vicinity of the volcano," the observatory warned.

The last major eruption of this volcano started at 07:36 UTC on March 8, 2017, and resulted in approximately 3 hours of significant ash emissions. A large volcanic ash cloud was visible in satellite data, moving towards the east at an altitude of 10.6 km (35 000 feet) above sea level. NWS issued a Special Weather Statement for trace amounts (less than 1 mm) of ashfall on Unalaska Island including the community of Dutch Harbor/Unalaska based on ash fallout modeling by the AVO. The agency also issued a Marine Advisory for volcanic ashfall on coastal waters near Bogoslof.

The March 8th event was the first detected eruptive activity since February 19. More than 1 000 lightning strokes related to the volcanic eruption cloud were detected during this event, which is by far the highest number observed since the beginning of eruption. In addition, the seismic levels were among the highest detected. Satellite images from March 8 showed that the W part of the island had grown significantly. The ACC was lowered to Orange and the VAL was lowered to Watch on March 9.

Images below were captured on May 8,