Data provided by the students of Earth to Sky Calculus and Dr. Tony Phillips of SpaceWeather.com show cosmic ray levels are intensifying, as the Solar Minimum approaches, with an approximately 13% increase since March 2015. This article provides a brief overview of some of the consequences for our planet, its climate and us.

"The accelerating pace of spotlessness is a sign that Solar Minimum is approaching," Dr. Phillips explains, adding that forecasters expect the sunspot cycle to reach its nadir in 2019 – 2020.

Although many people think Solar Minimum is boring, this is wrong, he says. "During the nadir of the sunspot cycle, the entire heliosphere changes its personality with many consequences for the space around our planet. One of the most important changes involves cosmic rays, high-energy radiation reaching Earth from deep space. As sunspot numbers decline, cosmic rays intensify."

The main reason why the cosmic rays are intensifying is the Sun, he says. Solar storm clouds such as coronal mass ejections (CMEs) sweep aside cosmic rays when they pass by Earth. During Solar Maximum, CMEs are abundant and cosmic rays are held at bay. Now, however, the solar cycle is swinging toward Solar Minimum, allowing cosmic rays to return. Another reason could be the weakening of Earth's magnetic field, which helps protect us from deep-space radiation.

To prove this is happening, Spaceweather.com and the students of Earth to Sky Calculus have been monitoring radiation levels in the stratosphere with frequent high-altitude balloon flights over California. Their data show cosmic ray levels intensifying with an approximately 13% increase since March 2015. Here are the latest results, current as of May 6, 2017: 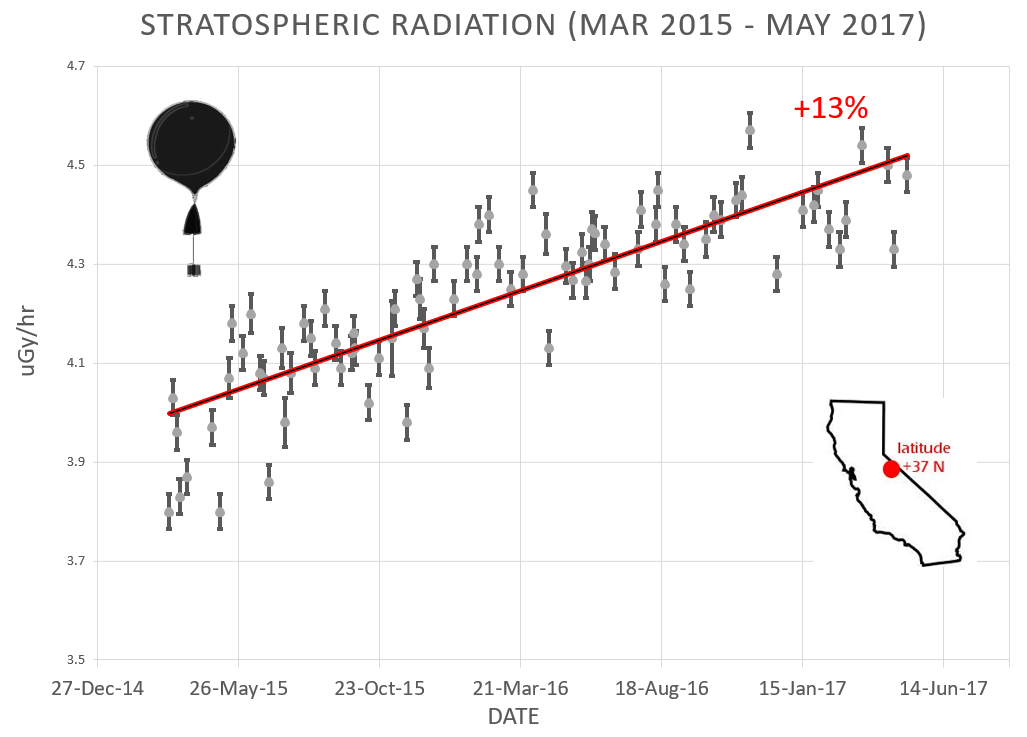 The radiation sensors onboard Earth to Sky Calculus helium balloons detect X-rays and gamma-rays in the energy range 10 keV to 20 MeV. These energies span the range of medical X-ray machines and airport security scanners.

The data points in the graph above correspond to the peak of the Reneger-Pfotzer maximum, which lies about 20 km (67 000 feet) above central California. When cosmic rays crash into Earth's atmosphere, they produce a spray of secondary particles that is most intense at the entrance to the stratosphere. Physicists Eric Reneger and Georg Pfotzer discovered the maximum using balloons in the 1930s and it is what they are measuring today.

The plot below displays radiation measurements not only in the stratosphere but also at aviation altitudes. 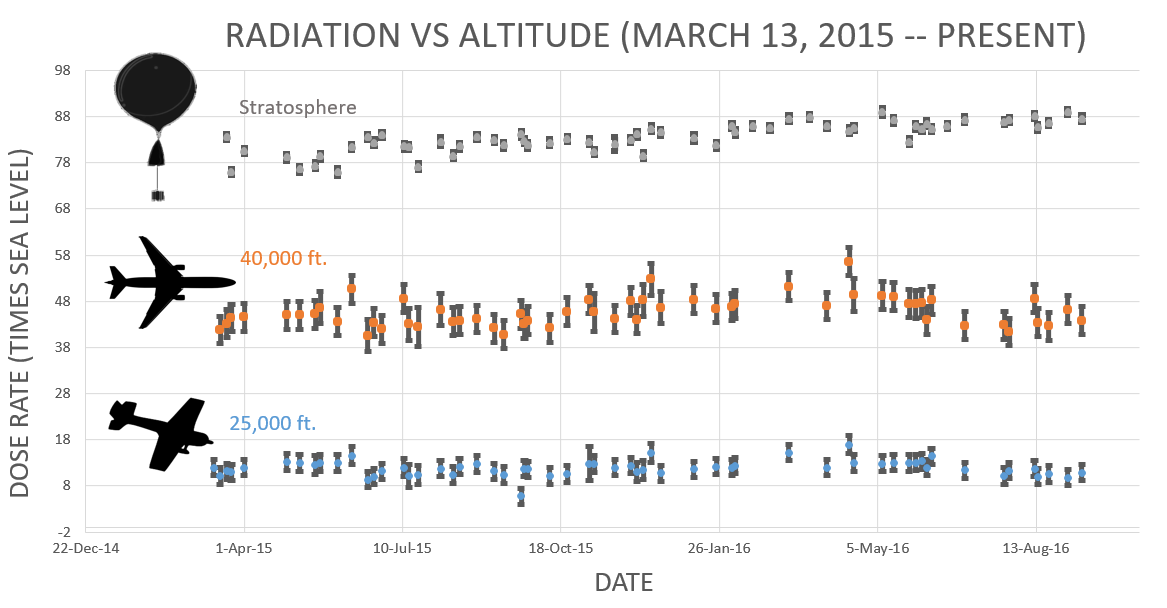 Dose rates are expressed as multiples of sea level. For instance, boarding a plane that flies at 7.6 km (25 000 feet) exposes passengers to dose rates ~10x higher than sea level. At 12.2 km (40 000 feet), the multiplier is closer to 50x. These measurements are made by their usual cosmic ray payload as it passes through aviation altitudes en route to the stratosphere over California.

So what exactly are cosmic rays and how does this affect us?

Cosmic rays are highly energetic photons and subatomic particles traveling through space at a speed approaching that of light. They are accelerated by distant supernovas and other violent events.

Phillips said that this increase in cosmic rays is not happening only over California where they are performing measurements. "All parts of the world will be experiencing elevated levels of cosmic rays. The amount varies from place to place depending on the uneven protection afforded by our own planet's magnetic field."

It has been suggested that the Sun may evolve into a period of lower activity over the 21st century and enter into a Grand Solar Minimum.

In a study published September 17, 2015, A. C. Maycock et al. examined the potential climate impacts of the onset of an extreme "Maunder Minimum-like" grand solar minimum using a comprehensive global climate model. The results show that a large decline in solar activity over the 21st century could have important impacts on the stratosphere and regional surface climate. "Given the fundamental role of solar energy in the climate system, a period of low solar activity may have important ramifications for the state of both the stratosphere and troposphere, and it is these aspects which are the focus of this study," the authors write. "It has been found, for example, that colder UK winters tend to occur more frequently during periods of low solar activity."

Authors say their study confirms the findings of earlier studies which have shown that a large decrease in solar activity would do little to offset the projected anthropogenic global warming trend.

But not everyone agrees. Some completely dismiss both "greenhouse gases" and variations in the Sun’s irradiance as significant climate drivers, and instead embrace cloud cover variations — modulated by cosmic ray flux — as a dominant contributor to climate change. 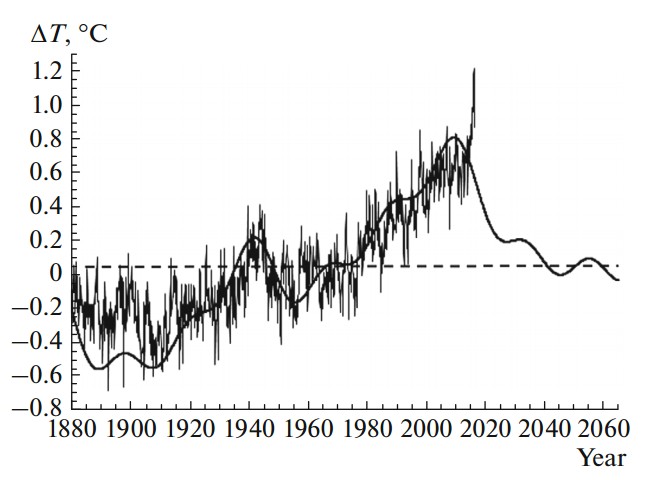 Changes ΔТ in the monthly average values of global (averaged over the Earth) temperature in the near-surface air layer (fine curve). The ΔТ values are counted from the average value of the global temperature, acquired for the period 1901–2000. The solid heavy curve represents the calculations performed using spectral data analysis. The forecast is given for changes ΔT in temperature after 2015. The dashed line corresponds to ΔT = 0. Credit: Y. I. Stozhkov et al.

Others argue that Earth's climate is the result of cyclical processes of varying wavelengths. Dr. Norman Page, for example, attributes climate changes to natural (60-year and millennial-scale) cycles of solar activity (and cloud cover changes), and he notes that the rise in solar activity since the depths of the Little Ice Age has been the predominant climate driver. The millennial peak in solar activity occurred in about 1991, with the corresponding (lagged) temperature peak in 2004.  Within the next few years the temperature is projected to drop significantly, he states.

David Dilley, CEO of Global Weather Oscillations, told Daily Star Online that global warming and cooling cycles are determined by the gravitational forces of the Earth, Moon and Sun. Each cycle lasts around 120 000 years, with sub-cycles of around 230 years.

"We have had five warming cycles since about 900AD, each followed by a dramatic cooling cycle," he said. "The last global warming cycle ended in 1790 and the year 2020 is 230 following this – thus I have been talking about rapid cooling beginning in 2019."

"Cooling from 2019 into about 2020 to 2021 will bring world temperatures back to where they were in the 1940s through the 1960s. The Arctic will freeze solid and rapidly by 2020 and thus allow much more Arctic air to build up and move southward toward Great Britain. Expect by the mid to late 2020s that winter temperatures will dip even colder than the 1940s to 1960s. This will last for 60 to 100 years and then a gradual warm-up toward the next global warming cycle that will not be as warm as the one we are now coming out of.”

Whatever happens in the years to come, it's reasonable to say we should be ready for anything. Only an informed and educated society/group can survive with as little consequences as possible.

We have repeatedly argued and showed in countless articles that the time when preppers were described as 'those crazy people' is long over. Be ready for anything, not just for climate change and extreme weather events. Know where you are living, where your sources of drinking water are and learn ways to survive in nature. Even if nothing bad happens to you, being ready can't hurt. The process might even prove to be rewarding on many levels, in both the short and the long run.