After engulfing a large part of northern China, including capital Beijing on Thursday, May 4, 2017, dust storm from Mongolia reached the Korean Peninsula and Japan over the weekend. In China, the storm reduced visibility to less than 1 km (0.62 miles) and forced authorities in Beijing to issue a high yellow dust alert, the first dust and storm alert this year.

The dust storm flew into China from the Gobi Desert in Mongolia late Wednesday into Thursday, May 4, extending to over 1.6 million km2 (617 763 mi2) and affecting more than 40 provinces, cities and districts.

Later in the morning, the readings dropped to around 900. The World Health Organization air quality guidelines (AQG) recommend 50 µg/m3 of PM10 as a 24-hour mean and 20 µg/m3 as an annual mean.

Official data from the Beijing government showed average readings of PM2.5 had risen to 630 µg/m3 in parts of the city by Thursday morning, though it dropped slightly later in the day. WHO's guideline for PM2.5 is 25 µg/m3 as a 24-hour mean and 10 µg/m3 as an annual mean.

The storm reached the Korean Peninsula late May 5 (local time) where highest PM10 readings reached 420 µg/m3 in Baengnyeongdo and Gyegryelbi-do during the early morning hours on Saturday, May 6. The levels dropped during the day and again increased on Sunday, May 7, especially in Heuksando and Gunsan. 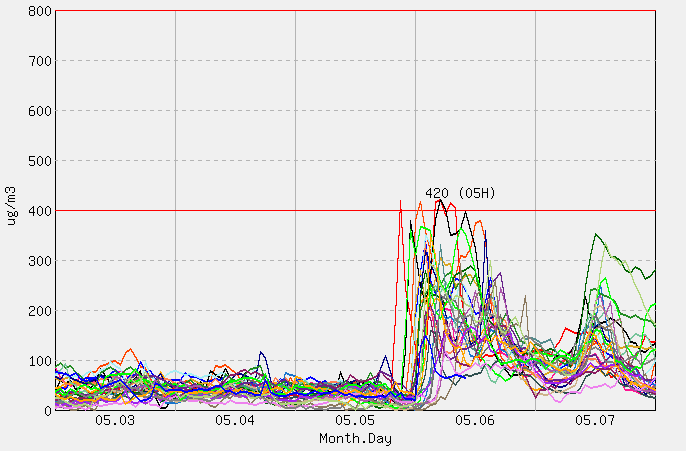 "With pollen levels having reached the zenith on top of heavy yellow dust hitting the country, patients with respiratory diseases must use extra caution to maintain health," the Korea Meteorological Administration said. 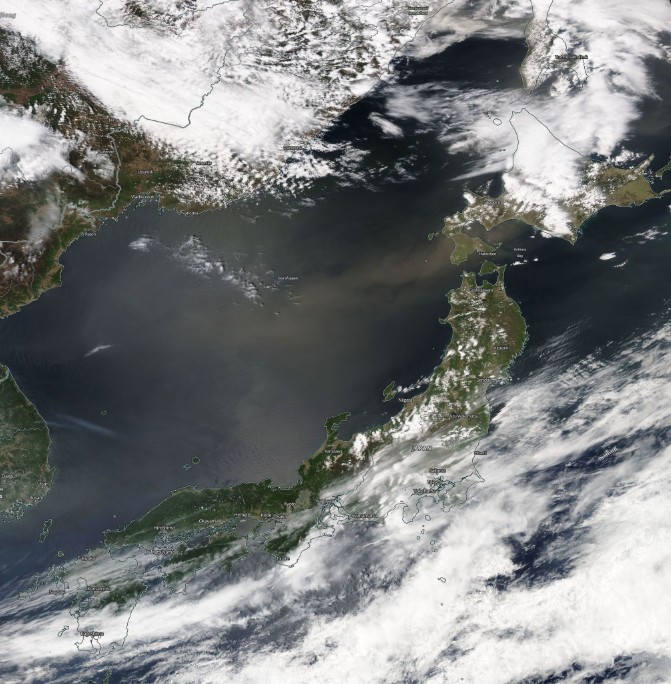 In Japan, the dust first reached the city of Matsue and soon stretched over a wide area from western to northern Japan and parts of the Kanto region on Sunday, May 7. Sand-laden air was observed in Hokkaido, the Tohoku, Chubu and Kansai regions, and Kyushu. It was also seen in Gunma and Ibaraki prefectures, according to The Japan Times. The airborne sand was observed in western Japan on Saturday for the first time this year, the latest date since 1967 when information about sandstorms began to be compiled in this country, it said.

The effects are expected to continue on Monday, mainly in western Japan where transport disruptions are possible, the Japan Meteorological Agency warned.

The animation below shows weather stations in East Asia (20-50º N, 110-150º E) that observe Aeolian dust or local sand/dust haze during the day. The figure is updated whenever new data become available.

The animation below shows predicted surface concentrations over the next three days.