A new analysis of decades of data on oceans across the globe has revealed that the amount of dissolved oxygen contained in the water – an important measure of ocean health – has been declining for more than 20 years.

Researchers at Georgia Institute of Technology looked at a historic dataset of ocean information stretching back more than 50 years and searched for long term trends and patterns. They found that oxygen levels started dropping in the 1980s as ocean temperatures began to climb.

"The oxygen in oceans has dynamic properties, and its concentration can change with natural climate variability," said Taka Ito, an associate professor in Georgia Tech's School of Earth and Atmospheric Sciences who led the research. "The important aspect of our result is that the rate of global oxygen loss appears to be exceeding the level of nature's random variability."

Falling oxygen levels in water have the potential to impact the habitat of marine organisms worldwide and in recent years led to more frequent "hypoxic events" that killed or displaced populations of fish, crabs and many other organisms.

Researchers have for years anticipated that rising water temperatures would affect the amount of oxygen in the oceans, since warmer water is capable of holding less dissolved gas than colder water. But the data showed that ocean oxygen was falling more rapidly than the corresponding rise in water temperature. 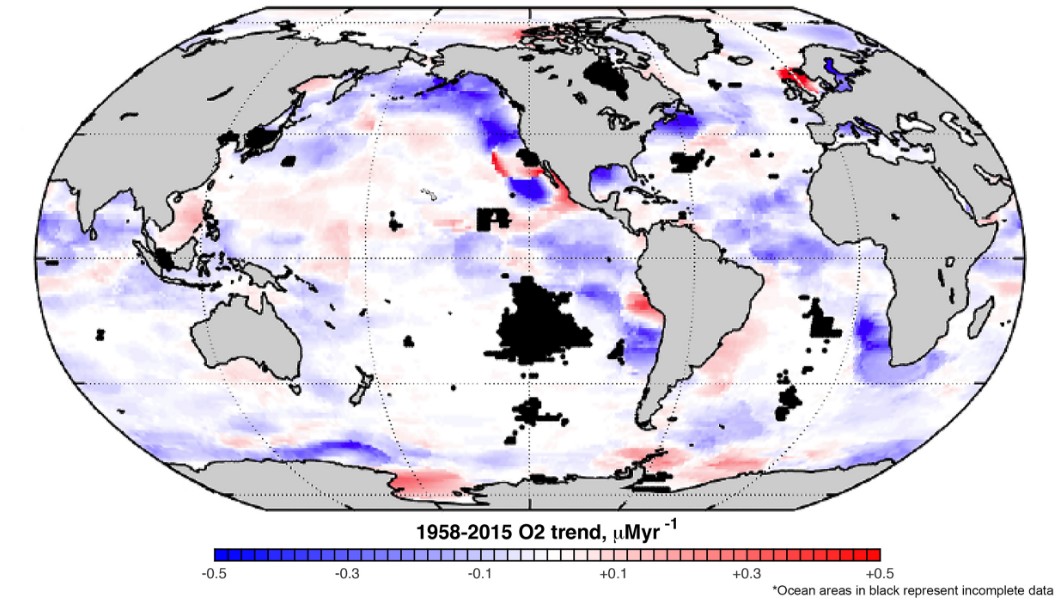 Global map of the linear trend of dissolved oxygen at the depth of 100 meters (328 feet). Credit: Georgia Tech

"The trend of oxygen falling is about two to three times faster than what we predicted from the decrease of solubility associated with the ocean warming," Ito said. "This is most likely due to the changes in ocean circulation and mixing associated with the heating of the near-surface waters and melting of polar ice."

The majority of the oxygen in the ocean is absorbed from the atmosphere at the surface or created by photosynthesizing phytoplankton. Ocean currents then mix that more highly oxygenated water with subsurface water. But rising ocean water temperatures near the surface have made it more buoyant and harder for the warmer surface waters to mix downward with the cooler subsurface waters. Melting polar ice has added more freshwater to the ocean surface – another factor that hampers the natural mixing and leads to increased ocean stratification.

"After the mid-2000s, this trend became apparent, consistent and statistically significant — beyond the envelope of year-to-year fluctuations," Ito said. "The trends are particularly strong in the tropics, eastern margins of each basin and the subpolar North Pacific."

In an earlier study, Ito and other researchers explored why oxygen depletion was more pronounced in tropical waters in the Pacific Ocean. They found that air pollution drifting from East Asia out over the world's largest ocean contributed to oxygen levels falling in tropical waters thousands of miles away.

Once ocean currents carried the iron and nitrogen pollution to the tropics, photosynthesizing phytoplankton went into overdrive consuming the excess nutrients. But rather than increasing oxygen, the net result of the chain reaction was the depletion oxygen in subsurface water.

That, too, is likely a contributing factor in waters across the globe, Ito said.

The study, which was published April in Geophysical Research Letters, was sponsored by the National Science Foundation and the National Oceanic and Atmospheric Administration. The team included researchers from the National Center for Atmospheric Research, the University of Washington-Seattle, and Hokkaido University in Japan.