An unusually early subtropical depression, the first of the 2017 Atlantic hurricane season, has formed in the central Atlantic between Bermuda and the Azores on Wednesday, April 19, 2017. The system could soon become Subtropical Storm "Arlene," but this will be a short-lived system without any impact on land. Tropical storm formation this early in a year is very rare, but a there has been a recently noticed trend in early starts to the Atlantic hurricane season. 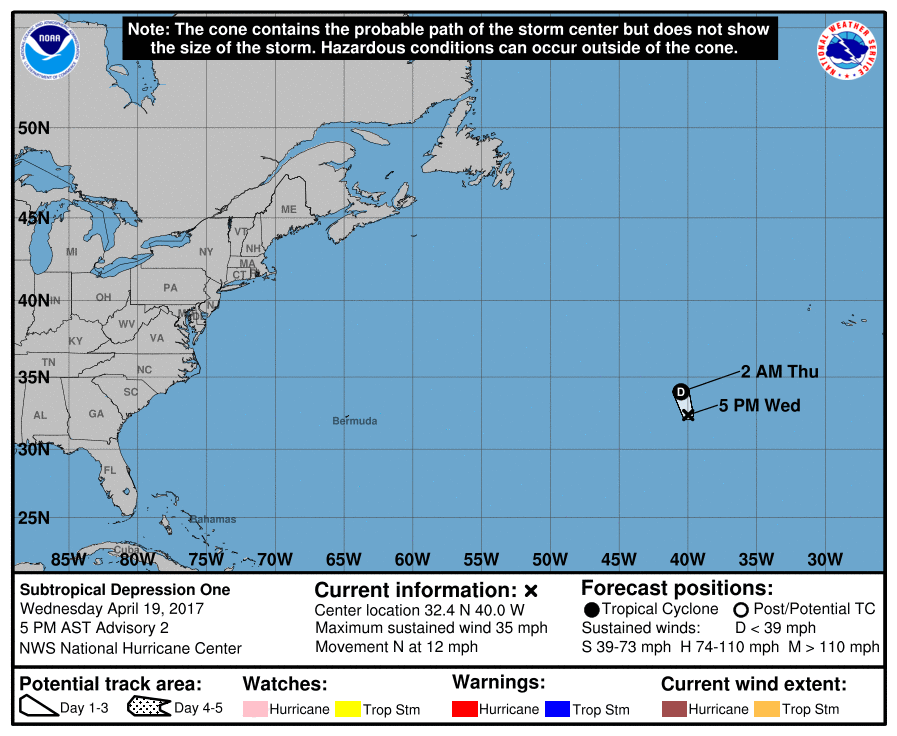 A gradual turn to the north is expected tonight and there is a slight chance system might soon strengthen into a Subtropical Storm "Arlene" before it gets absorbed by a large extratropical low on Thursday.

Tropical storm formation over the Atlantic basin is very rare during the first four months of a year. On April 20, 2003, a subtropical storm named Ana formed and soon gained full tropical characteristics. That made Ana the only tropical storm on record to form in the Atlantic Basin in April, The Weather Channel explained.

"While Ana remains the only April Atlantic tropical storm in records dating to 1851, an April 1992 subtropical storm was found in post-analysis by the NHC. Since it was not classified as such at the time, a later hurricane that year, Andrew, got the "A" name. There have been numerous seasons that started early. On a long-term average, a tropical system forms prior to June about once every 10 years, and these storms tend to be relatively weak, due in part to cooler sea-surface temperatures."

However, there has been a recent trend in early starts to the Atlantic hurricane season, with 2012, 2015 and 2016 all reporting tropical cyclone formation before June 1, the official start of the season.

You might remember a record-breaking Hurricane "Alex" which developed on January 14, 2016. The occurrence of that system was very unusual, as only four known storms have formed in January since the records began in 1851. Alex is the strongest January hurricane in history.

What is a subtropical storm

According to NHC, a subtropical storm is a non-frontal low-pressure system that has characteristics of both tropical and extratropical cyclones. Like tropical cyclones, they are non-frontal, synoptic-scale cyclones that originate over tropical or subtropical waters, and have a closed surface wind circulation about a well-defined center. In addition, they have organized moderate to deep convection, but lack a central dense overcast.