This small asteroid, first observed at Mt. Lemmon Survey on April 3, will make its closest approach to the Earth at 10:31 UTC on April 4 at a speed (relative to the Earth) of 18.48 km/s.

This is the 17th known asteroid to pass within 1 lunar distance since January 9, 2017, and the closest one. You can find them all in our Near-Earth Objects category. 2017 GM is also one of the 10 known near-Earth asteroids to pass this close to Earth ever.

Since the start of the year, we have discovered 355 new near-Earth objects. All of them are asteroids.

The Virtual Telescope Project captured 2017 GM while it was safely approaching us today.

"For this, we remotely used a telescope in Arizona, made available to the Virtual Telescope by Tenagra Observatories, Ltd. Above is an image coming from a single 30-seconds exposure, unfiltered, taken with the 16″-f/3.75 Tenagra III (“Pearl”) unit.  The Paramount MEII robotic mount tracked the fast apparent motion (150″/minute) of the asteroid, so stars are trailing. The asteroid is perfectly tracked: it is the sharp dot in the center, marked by two red lines," they said. 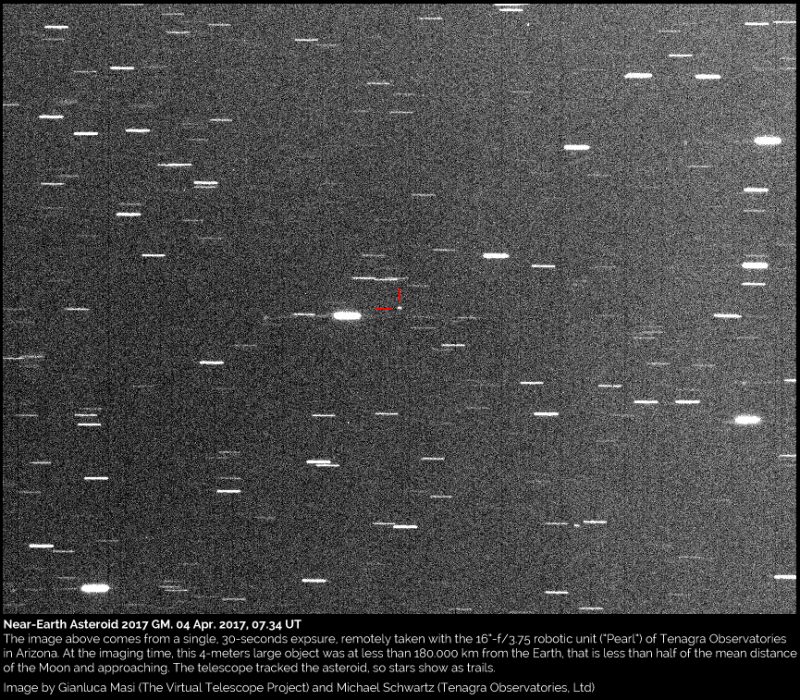 Featured image: The green line indicates the object's apparent motion relative to the Earth, and the bright green marks are the object's location at approximately one hour intervals. The Moon's orbit is grey. The blue arrow points in the direction of Earth's motion and the yellow arrow points toward the Sun. Credit: Minor Planet Center