Powerful thunderstorms and tornadoes left behind serious damage across North Texas on Tuesday and Wednesday, March 28 and 29, 2017 and caused power outages to more than 200 000 people. NWS SPC warns there is an enhanced risk of severe thunderstorms Thursday from southern parts of Illinois and Indiana, southeast Ohio south across the Tennessee Valley to central Mississippi.

NWS preliminary reports for March 28 mention 16 tornadoes, all of them in Texas. Tennis ball-sized hail and 119 km/h (74 mph) wind gusts were reported in Seymour, while El Reno, across the border in Oklahoma, registered 153 km/h (95 mph) wind gusts.

On this sad day, three storm chasers were killed in a two-car accident near Spur, Texas. On Wednesday, two brothers, aged 11 and 12, died after they were electrocuted by downed power lines in a heavily wooded area in East Forth Worth.

A survey team with the NWS has confirmed an EF-1 tornado with maximum wind speeds of 145 km/h (90 mph) touched down in southwest Houston. The tornado caused a big scare and plenty of damage to an apartment complex. There were no injuries reported, but many families in the complex were affected, according to KHOU. Several vehicles were also damaged when a carport caved in.

According to the NWS Storm Prediction Center, there is an enhanced risk of severe thunderstorms Thursday from southern parts of Illinois and Indiana, southeast Ohio south across the Tennessee Valley to central Mississippi.

"An upper low crossing eastern Kansas early in the period is forecast to accelerate eastward across Missouri and into the Midwest through the period – as a vigorous short-wave over the Pacific Northwest at the start of the period digs southeastward with time, evolving into a deepening closed low with time and reaching the Arizona/Utah border region by the end of the period," SPC said in Day 1 Convective Outlook, valid 12:00 UTC, March 30 – 12:00 UTC, March 31.

As the eastern upper low is kicked eastward by the digging western system, short-wave troughing – within broader cyclonic flow surrounding the low – will move quickly eastward out of the southern Plains and across the Gulf of Mexico and Gulf coastal states. This will facilitate a rather rapid eastward advance of a surface cold front across the southeast quarter of the country. This front – trailing southward from a parent low moving across the Ohio Valley states through the afternoon and evening – should extend from the southern Appalachians to the Florida Panhandle vicinity by 12:00 UTC, March 31

The Midwest south to the Gulf Coast, and the Mississippi Valley east to the Appalachians:

A very complex weather scenario continues to unfold – complicated largely by ongoing showers and locally strong to severe storms now affecting the middle and lower Mississippi Valley area. Models suggest that much of this convection will be contained within two distinct clusters at the start of the period – one crossing the mid Mississippi Valley into the lower Ohio Valley area, and a second crossing southern and eastern Mississippi/eastern Louisiana. The Ohio Valley convection is forecast to gradually weaken through the morning hours, while the southern cluster of convection may persist – in a locally severe manner – across the central Gulf coastal region. 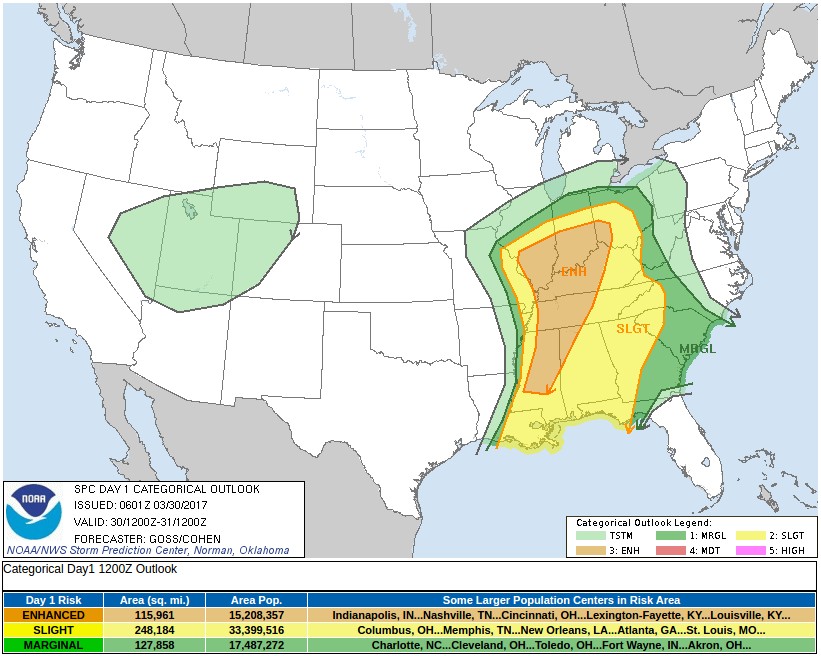 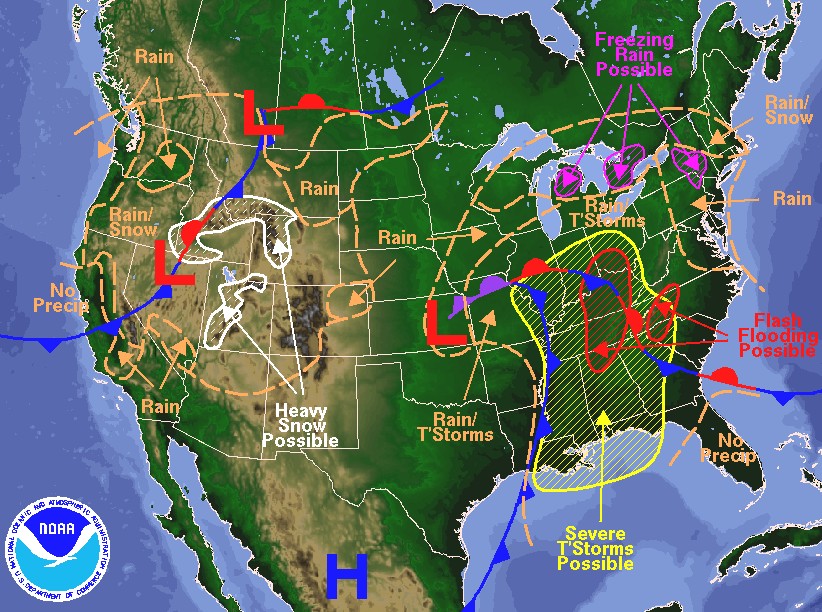