Tropical Cyclone "Debbie" made landfall around 00:40 UTC on March 28, 2017 between small towns of Bowen and Airlie Beach in Queensland as Category 4 tropical cyclone on the Australian tropical cyclone wind scale. Many locations in the cyclone’s path have so far received 150 – 200 mm (up to 7.9 inches) of rain. So far, at least one person has been killed and one seriously injured, over 25 000 are displaced and at least 45 000 without power. Hundreds of schools were closed Tuesday.

Tropical Cyclone "Debbie" formed in the Coral Sea on March 25, 2017 as the first cyclone of what has been very quiet season across the southern hemisphere. It reached Category 3 strength on March 27, and Category 4 just before it made landfall.

Debbie's center crossed the mainland around 00:40 UTC (12:40 AEST). Preliminary landfall intensity was estimated at 194.4 km/h (120.8 mph) based on Dvorak analysis and earlier gusts up to 262 km/h (162.8 mph) at Hamilton Island, according to the Australian Bureau of Meteorology data released 12:00 UTC today. This made Debbie a Category 3 hurricane equivalent on the Saffir-Simpson Hurricane Wind Scale. The SATCON estimate near landfall time was 181 km/h (112.8 mph).

The system has since moved slowly southwest over land while weakening. With land interaction, the eye has gradually become cloud-filled and less defined on radar and only a small amount of deep convection remained about the center.

The system is most likely to remain on a general slow southwest track further inland for the next 12 hours, with a subsequent curve to the south on Wednesday and southeast on Thursday as the ridge weakens and an upper trough develops through southern Australia. There is still high confidence in this track.

As the system tracks inland and curves onto a southerly and eventually a south-southeasterly track during Wednesday and Thursday, interaction with the upper level trough over southern Australia may actually lead to an extra-tropical transition and possibly a slight re-strengthening of the system.

At 16:00 UTC (03:00 AEST on March 29), Debbie was downgraded to a tropical low. However, impacts due to heavy rain, damaging wind gusts, and abnormally high tides are still expected across a broad area. 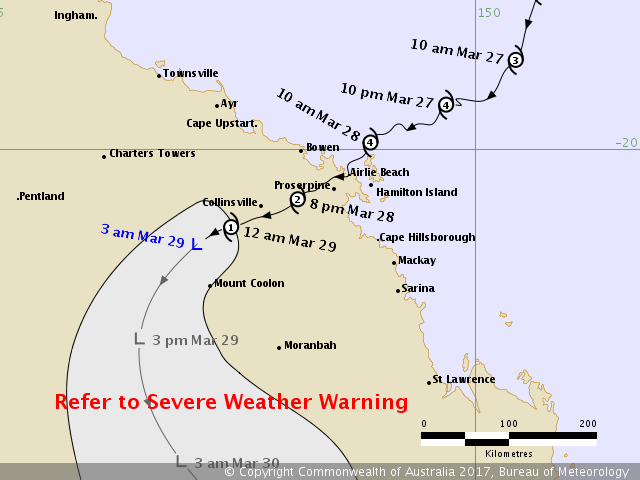 Prime Minister Malcolm Turnbull said the Federal Government was working closely with the Queensland Government to deal with fallout. "We have put in place the biggest pre-deployment of the Australian Defence Force in advance of a natural disaster," he said.

"We're going to be getting a full assessment of the extent of the damage Wednesday morning at first light," Queensland Premier Annastacia Palaszczuk said. "Please stay inside, do not leave your homes until authorities give you the OK to do so," she warned.

Local media reports at least one death, one seriously injured, over 25 000 displaced and at least 45 000 people without power. Authorities fear the death toll will rise.

"We're getting hammered something savage… the wind is absolutely raging, roaring and hasn't let up for about three hours," Collinsville resident Julie told ABC. "I'm shattered emotionally and physically. I've gone through the worst 24 hours I've experienced in my 53 years," she said.

"Storm tide in Mackay was not as bad as feared," Queensland Police Commissioner Ian Stewart said.

"We've dodged a bullet I believe, because of the timing of the cyclone, the fact that it slowed down last night it actually took it away from the high tide which was a bit of a silver lining for us," he said.

"But I do believe we've got to be prepared for the worst as the information in the next 24 hours comes out of those areas."