A new research shows that eruptions on the Sun’s surface not only send bursts of particles into Earth’s atmosphere, but – contrary to previous belief – also remove electrons across large areas. The new knowledge increases our understanding of solar storms and can contribute to more reliable communication and navigation in Arctic areas.

This phenomenon occurs especially at high latitudes. It happens because the magnetic field created by the eruption on the Sun interferes with the Earth’s magnetic field. It opens, so to speak, up to allow particles and electrons, that would otherwise be reflected, to penetrate the ionosphere.

It is a known phenomenon. But it turns out that electrons at the same time disappear from large areas, which has not been demonstrated earlier.

"We made extensive measurements in connection with a specific solar storm over the Arctic in 2014, and here we found that electrons in large quantities are virtually vacuum-cleaned from areas extending over 500 to 1 000 km (310 – 620 miles). It takes place just south of an area with heavy increases in electron density, known as patches," says Professor Per Høeg from DTU Space.

The results of the research were recently published on the front page of the renowned scientific journal Radio Science. The discovery is an important piece in the jigsaw puzzle of understanding solar storms and their impact on the Earth’s ionosphere.

It’s a surprising discovery that we hadn’t anticipated. We can see that it happens, but we don’t know why. However, other datasets from Canada indirectly support our new observations," says Per Høeg.

"The forerunner to the phenomenon is a violent eruption on the Sun’s surface, also known as coronal mass ejections or CME, where bubbles of hot plasma and gas in the form of particles, electrons, and a magnetic field are hurled in the direction of the Earth," says Per Høeg.

As the geomagnetic solar storm took place in the ionosphere over the Arctic in February 2014, it was measured via satellites and land-based measuring stations. Among other things, via the GPS network GNET in Greenland, which DTU helps run, via DTU’s geomagnetic measuring stations, the global navigation system GPS, and various American and Canadian satellites. Thus, large data volumes from the solar storm were recorded.

The research extends far beyond the discovery that electrons are pulled out during solar storms.

"There are two aspects of this research. It can both be used for a number of practical purposes, and then there is a theoretical part which is about achieving a better basic understanding of these phenomena, said Tibo rDurgonics, a  Ph.D. student at DTU Space and main author of the new article in Radio Science.

"Our work can contribute to making navigation more reliable during ionospheric storms in the Arctic region. Our new research has enabled us to identify a number of critical factors that affect the quality of satellite-based navigation, and to assess the probability of when these factors may occur. At a more theoretical level, we have found out that during solar storms, electrons are removed in the ionosphere, which is the opposite of what you intuitively would expect."

When the magnetic field from solar eruptions hits the Earth’s magnetic field in the ionosphere, their force fields are mixed. Consequently, unstable areas – so-called patches – are created in the Earth’s ionosphere, extending over large areas near the North Pole. The area of patches at the polar cap may extend over 500 to 1 000 km (310 – 620 miles) with electron speeds exceeding 1 000 meters per second. This gives rise to surging powerful Northern Lights and creates turbulent conditions.

Interferes with navigation and communication systems

The risk of disruptions in the ionosphere is one of the reasons why no routine flights are made over the Arctic, although this would shorten air travel between Europe and America. The high-frequency signals used by commercial flights over Greenland will be subject to interference during solar storms. The ability to predict and take into account these kinds of conditions is therefore important for future commercial air traffic in the region. The same applies to marine traffic in the Arctic. 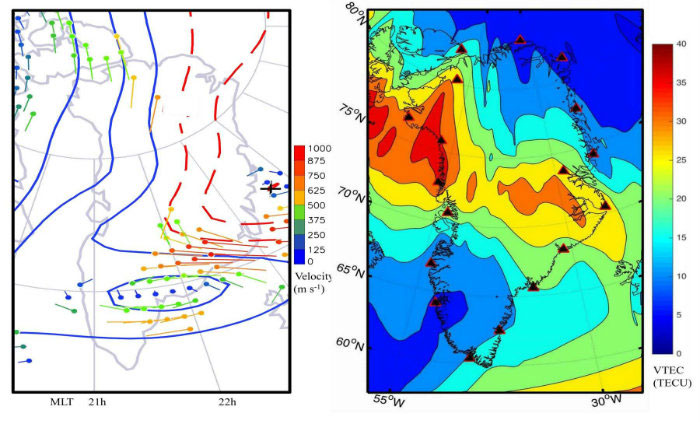 In connection with violent solar eruptions, large variations occur in electron density in the ionosphere over Greenland, which interferes with GPH navigation signals as well as flight and satellite communication. The figure (right) shows large electron density in red and small density in blue. This phenomenon gives rise to high electron speeds in the ionosphere, exceeding 1 000 meters per second (left) and resulting in violent energy bursts. For the first time ever, researchers from DTU have demonstrated the phenomenon which cannot yet be explained. Illustration: DTU Space

Professor Per Høeg hopes that the work conducted at DTU Space—in addition to ensuring more knowledge about the phenomenon—will contribute to the development of communication and navigation systems that can take into account conditions during solar storms to ensure safe flights and sailing in the polar cap areas.

DTU Space is currently participating in several research projects under ESA and the EU’s Horizon 2020 programme which develop systems that can handle the conditions during space weather and solar storm conditions for aviation and marine traffic, among other things.