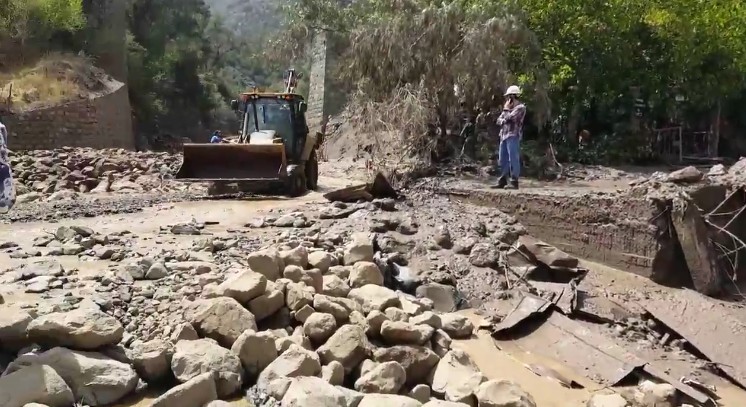 Heavy, unseasonable rains have caused major floods and mudslides in Chile, leaving at least 3 people dead and 19 missing on February 25 and 26, 2017. In the area of country's capital, Santiago, mudslides have cut off water to around 1.2 million homes. Thousands remained isolated on Monday, February 27.

Waters rushing down from the Andes since Saturday afternoon had caused landslides, cutting roads and isolating thousands of people, it said and added that falling rocks and other debris overwhelmed the intakes for urban water systems, cutting service to about 1.2 million homes in the area around Santiago.

A Red Alert was declared for the Province of Santiago and the communes of San Bernardo and Puente Alto for the interruption of the supply of drinking water, effective February 26, which will mobilize all necessary and available resources to act and control the situation.

"Emergency teams are working on the ground to connect with isolated personas and re-establish the water supply wherever possible," Chilean President Michelle Bachelet wrote on Twitter.

In the O'Higgins region, south of Santiago, a 12-year-old girl was killed when a landslide swept away the car in which she was traveling. Three others were injured.

Officials in the capital region said two bodies had been recovered from a river near Santiago.

As of February 26, 7 people were missing in the sectors of Los Maitenes and San José de Maipo, where over 300 people are still isolated. Helicopters have delivered water, medical and food supplies. Police search teams are carrying our searches along the Maipo river.

In Antofagasta Region, around 120 people have been evacuated after flooding from the overflowing San Pedro River in the municipality of San Pedro de Atacama.

This was the second major flooding event to hit central Chile in the last 12 months.