More than a dozen people were rescued Friday, February 10, 2017, from flood waters in northern Nevada as authorities brace for what they say could be some of the worst floodings in more than 30 years by the end of the weekend. At the same time, unusually warm temperatures sped the snowmelt, increasing flooding threat in Nevada, California, and Idaho. Since February 9, two people have lost their lives.

Mudslides and rockslides temporarily closed two major highways from Nevada to Lake Tahoe and restricted travel on US Interstate 80 over the Sierra Nevada near Truckee, California. Authorities warned residents on Lake Tahoe's north shore to stay in their homes due to the threat of avalanches after nearly 91 cm (3 feet) of new snow fell on the mountaintops overnight, the Associated Press reports.

In northeast Nevada, authorities are bracing for what they said could be some of the worst floodings in more than 30 years by the end of the weekend. US Highway 93 remained closed from Wells to the Idaho line.

National Weather Service meteorologist Jeremy Michael told the Elko Daily Free Press the Humboldt River had risen higher than at any point since May 1984. It's expected to exceed flood stage on Sunday, February 12. Michael said it could result in major damage to roads, structures and railroads, and potential loss of cattle in the flood plain.

On Wednesday, February 8, the Twentyone Mile Dam in Elko County broke, impacting about 30 residences in Montello. This dam is considered a "low hazard structure," which means any breach is not expected to cause loss of life. Elko County Sheriff Jim Pitts said Wednesday that basements in the area flooded, but there were no immediate reports of injuries. Kevin Hall, a captain with the East Elko Fire Protection District, said that the flooding and the breach were due to heavy runoff and snowmelt. A 16 km long (10 mile) stretch of State Route 233 remains closed. 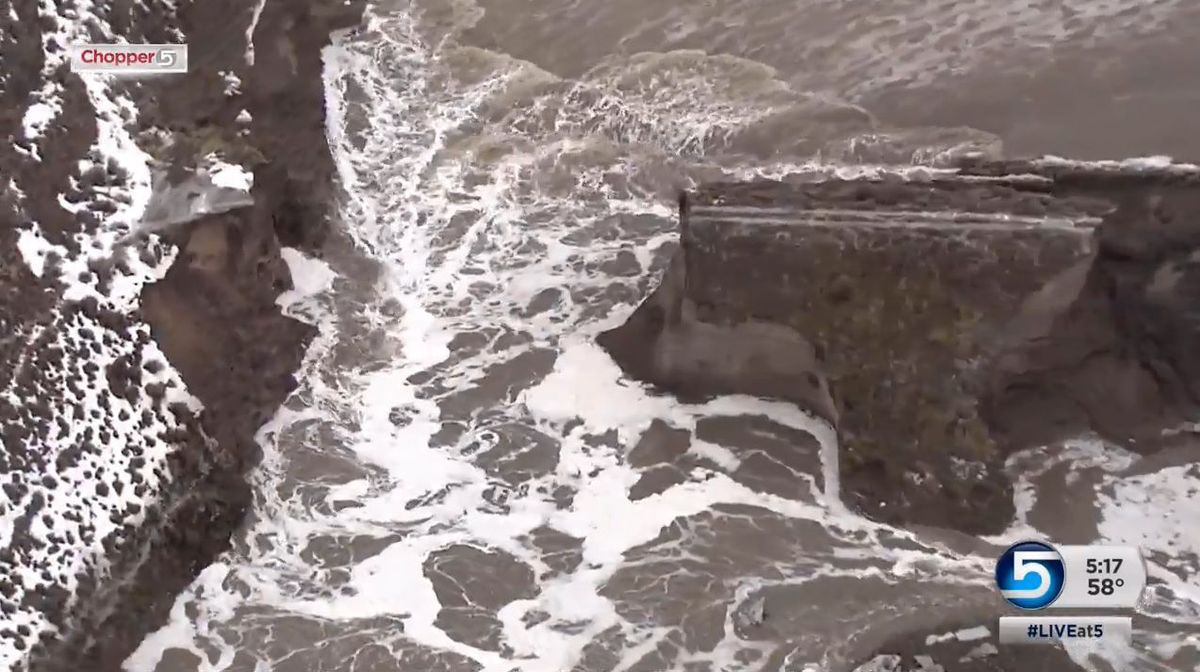 In California, two people died in weather-related accidents over the past couple of days.

A road crew worker was killed Thursday, February 9 while working to clear debris from a slide on Highway 17 in Northern California, AP said. A dump truck ran over the 54-year-old man and his 33-year-old co-worker, who was injured. California Highway Patrol officer Trista Drake says the men were behind the truck when it began backing up.

Another man, in his 20s, was killed when his car plunged into a flooded creek near Bakersfield in central California. When authorities arrived, they were able to rescue a female passenger who was clinging to tree branches; however, the man was trapped in the car when it submerged upside down.

360 photos and video of the massive debris flow that slammed into a hillside home in Orinda: https://t.co/QRAOSiW6k6 Via @RaquelMDillon

In Oroville, California, a very large hole (61 m / 200 feet long and 9 m / 30 feet deep) opened in the wall of the Oroville Dam spillway on Wednesday, February 8. The hole continues to grow, but authorities say it does not pose a threat to the dam, the tallest in the United States, or public safety.

"Whether the emergency spillway is used or not, Oroville Dam itself is sound and there is no imminent threat to the public," said California Department of Water Resources (DWR) Acting Director William Croyle on February 10, 2017. 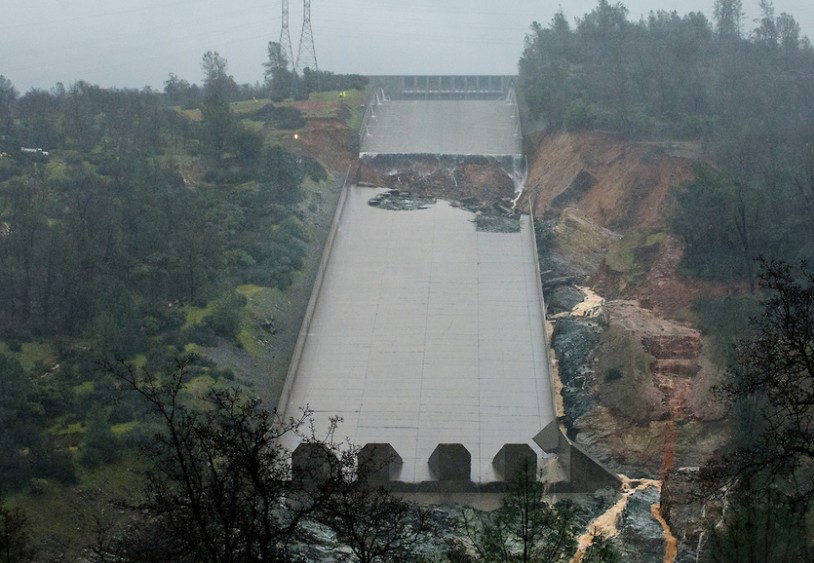 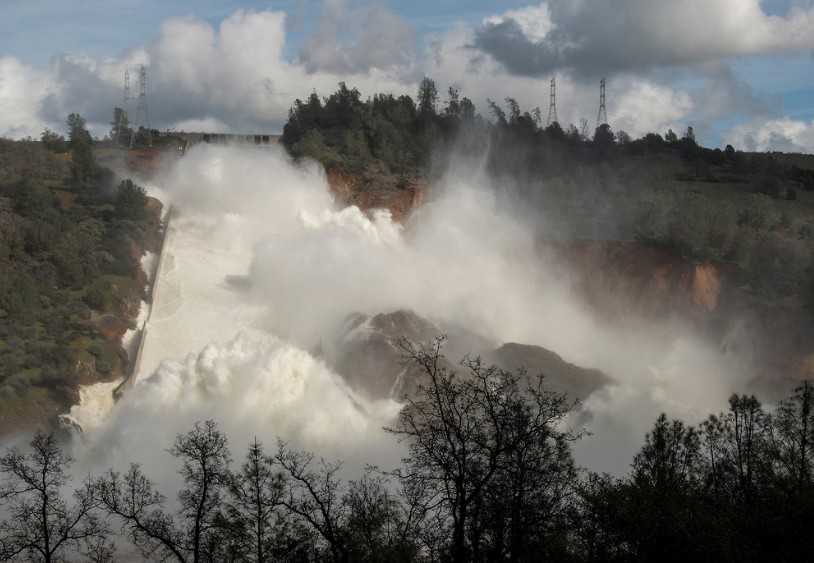 In Idaho, parts of the state dealt with flooding, the AP said, after a rapid increase in temperatures began melting historic levels of accumulated snow left behind after an unusual series of winter snowstorms.

Dozens of roads have been swept away by the rushing water in the area, but no deaths or serious injuries have been reported. A car was swept away by violent floodwaters in Twin Falls County after the driver went past a police barricade.

The Cassia County took the brunt of the damage.

Canals and creeks are overflowing, roads have been washed out or closed, basements are flooding and water is standing up to 60 cm (2 feet) deep in fields or causing erosion as it runs to lower ground.

Another train of storms arrives next week

The western US will enjoy a much-needed break from precipitation this weekend, but river flooding will continue due to snowmelt and runoff from the recent storms, the NWS warned.

However, this is not the end of the West Coast rains as a new train of storms is set to begin later next week.

During the second half of next week, the jet stream will collapse southward, causing another temperature drop and moisture flow from the Pacific Ocean toward the West Coast, AccuWeather meteorologists said.

"As the pattern evolves during the second half of February, the storms may again become potent enough to renew rounds of flooding rain, heavy mountain snow and gusty winds. The next batch of rain may reach coastal areas of the Northwest by the middle of next week. However, it may not be until the end of next week or next weekend before the first strong storm system moves in."

Since November 2017, rainfall and mountain snowfall has averaged 150 to 300% of normal in California. 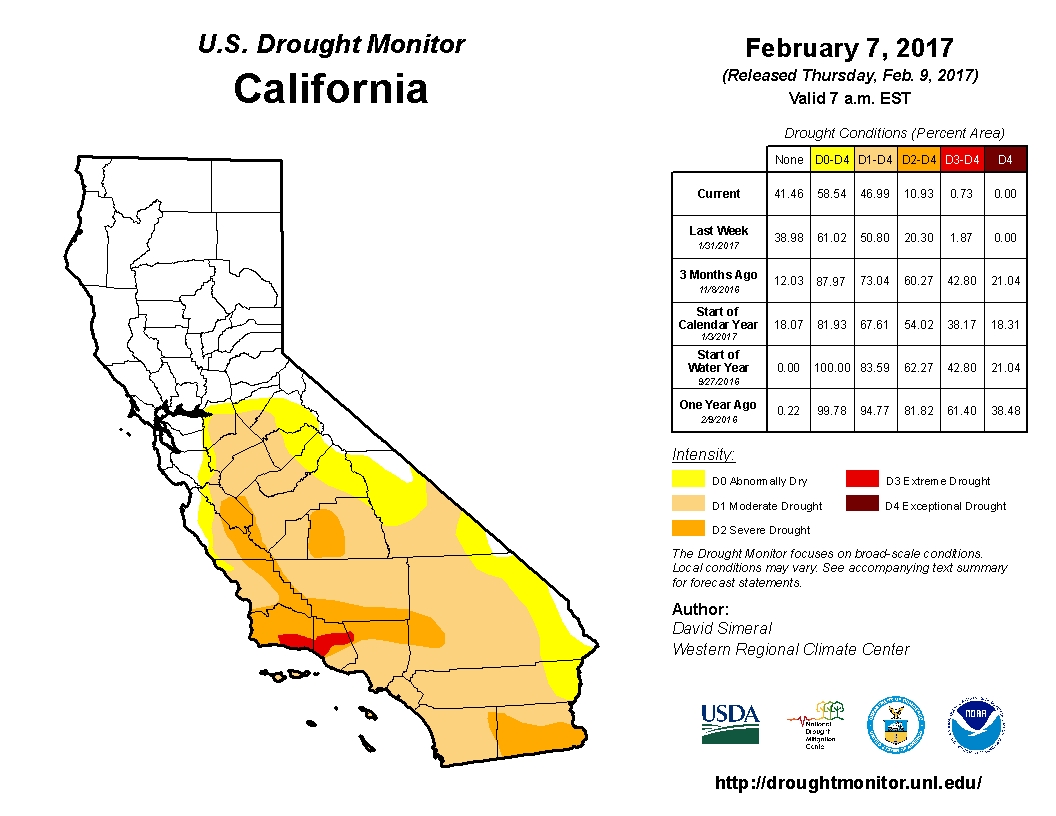 But, while drought conditions are completely over in the state's north, the same can't be said for central and southern regions which rely on groundwater for municipal water supplies.

"The rates of San Joaquin Valley subsidence documented since 2014 by NASA are troubling and unsustainable," DWR Director William Coyle said in a statement. In some areas, ground level has dropped more than 9.1 m (30 feet) since 1940s, and threatens to damage aqueducts and flood control structures.

Even in wet winters, with its enormous population growth in recent decades, Southern California remains dependent on the Colorado River and northern Sierra Nevada snowmelt, both distributed by the Metropolitan Water District (MWD), NBC explains. For those Southern California areas remain out of reach of the MWD's distribution system, the drought remains high profile. The city of Los Angeles also takes water from the eastern Sierra via the LA Aqueduct.

The city of Ventura, for example, does not receive any MWD water, relying solely on wells and surface water. During the drought, the water level in its main storage reservoir, Lake Casitas, had dipped low enough to reveal historical structures not seen since the lake began filling in 1958. The water level has risen this winter, but stands at only 37.5% of capacity, according to the Casitas Municipal Water District.