A huge pocket of hot air is causing extreme heatwave conditions across eastern Australia, causing authorities to prepare for temporary suspension of power to selected areas of New South Wales late Friday, February 10, 2017. Rare Catastrophic fire weather conditions for NSW are expected on Sunday which is shaping up to be the worst fire weather day so far of the season. January was the hottest month on record for Sydney since 1859, but the city has broken its 121-year-old record today when Friday became the 10th day this summer with highs exceeding 35 °C (95 °F).

The Australian Bureau of Meteorology warned that severe to extreme heatwave conditions are forecast to continue for eastern Australia for several days, with widespread temperatures in the low to mid-40s (104 – 113 °F).

Forecast temperatures are well above average for southern Queensland and northern New South Wales, it said.

Hot conditions will extend from inland Queensland into the southeast of the state later in the week, with high humidity making the conditions even more uncomfortable.

New South Wales could experience its hottest February day on record on Saturday, February 11, as extreme heatwave conditions peak across the state.

Forecasts indicate temperatures will reach the mid-40s (113 °F) in many inland areas and high 30s along the coast for the next two days. 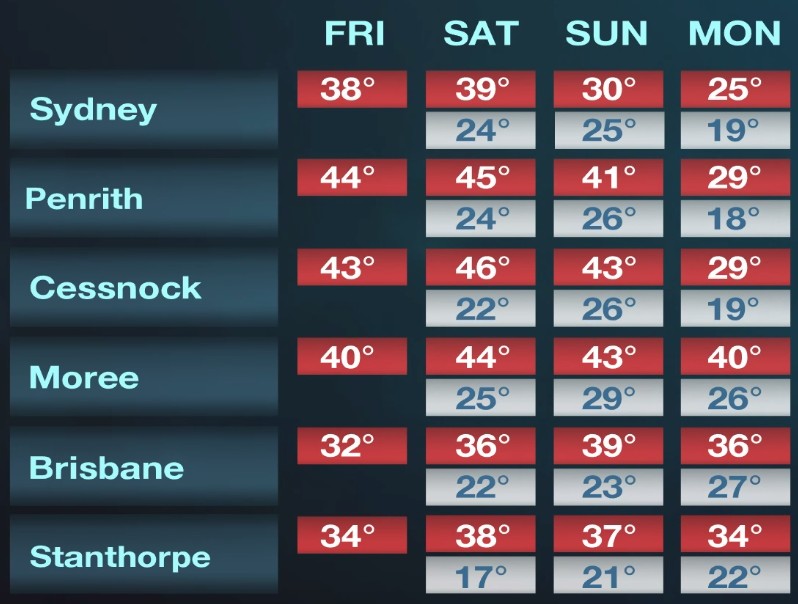 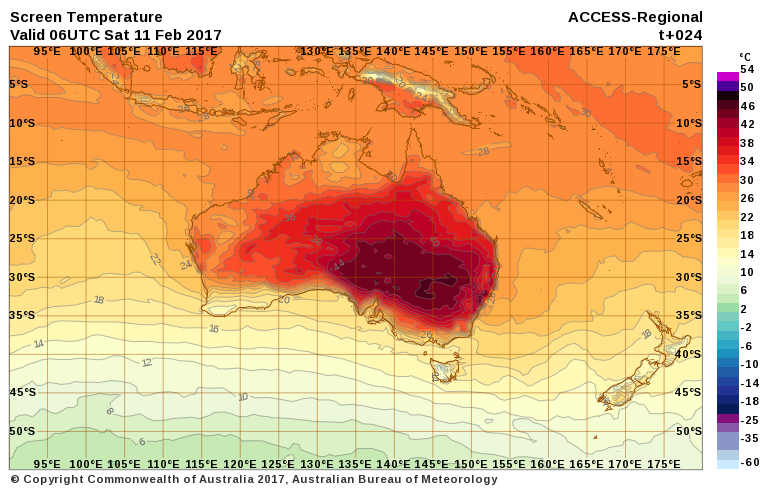 Authorities were preparing to temporarily suspend power to selected areas of NSW state late on Friday to prevent overload just days after 40 000 homes and businesses lost electricity in the state of South Australia.

"Rather than going straight home and turning on the television and cooking, (you might) want to consider going to a movie, going out to a shopping center, keeping the load low, every bit like that helps," Harwin told journalists in Sydney.

Acting NSW Regional Director Stephen Lellyett said a stationary mid-level ridge over central Australia had caused a build-up of heat over the interior of the continent over the last few weeks.

“Fire weather warnings are also likely during the weekend as the system will lead to increasing wind speeds in conjunction with the extremely hot temperatures. The forecast Catastrophic fire weather conditions on Sunday in the upper Hunter and fringes of adjoining districts are rare in NSW. Sunday is shaping up to be the worst fire weather day so far of the season.”

Forecast models indicate the front will sweep through the state on Sunday, leading to some relief from the extreme heat from Monday.

January was the hottest month on record for Sydney since 1859. A number of areas in the state, including Moree and Walgett, have experienced a significant number of consecutive days over 35 °C (95 °F) and will come close to the record of 50 hot days in a row.

Friday, February 10, 2017, became the 10th day this summer of highs exceeding 35 °C (95 °F) at Sydney's Observatory Hill, the city’s official weather station. Never before have so many such days been registered in a summer since record-keeping began in 1859.

The old record for the most days was nine, which was originally set during the summer of 1895-96, according to data from the Bureau of Meteorology. The record was tied this summer on January 31 as the city's hottest month on record came to a close.

When temperatures are unusually hot over a period of time, with continuously high night-time and day-time temperatures, heat stress becomes a critical factor in human survival and infrastructure resilience.

Hot weather can affect anybody, may make existing medical conditions worse and can cause heat-related illness. In some cases, heat effects may be fatal. Heatwaves may also affect community infrastructure such as power supply and other support services.

The best way to reduce the risk of heat-related illness is to drink plenty of water and keep your body as cool as possible, and avoid prolonged sun exposure by staying indoors in cool or air-conditioned facilities – either at home or at local shopping centers, libraries, and cinemas.

Meanwhile, a tropical low is dumping heavy rain and causing flash flooding in Western Australia. Several towns have been cut off and people evacuated after the Avon River burst its banks.

Perth has experienced its second-wettest day on record with around 114 mm (4.48 inches) of rain recorded since 09:00 local time on Thursday, February 9.