At least 15 people have died in south Georgia on Sunday, January 22, 2017, after powerful storms swept through the region. After 4 deaths in Mississippi on Saturday and 1 in Florida on Sunday, this makes the death toll from severe weather outbreak across the South rise to 20. According to preliminary SPC number, 19 deaths were caused by tornadoes.

A rare 'high risk' severe weather outlook has been issued today by the Storm Prediction Center: Severe thunderstorm and tornado outbreak is expected from north Florida and south Georga, with a significant severe threat also expected to extend southward into central Florida and northwestward into South Carolina this evening; a few long-track, strong tornadoes will be possible.

An EF3 tornado ripped through a mobile park near Adel, a town of 5 300, in south Georgia's Cook County before dawn on Sunday destroying about 20 of its 40 mobile homes and killing 7 people. Another 4 people died in neighboring counties while at least 23 were injured.

We're getting our first look at storm damage out of Adel. The pictures are hard to describe. Very devastating. Prayers to all. pic.twitter.com/52yzM0wrz5

Catherine Howden of the Georgia Emergency Management Agency said that the deaths occurred in Cook, Brooks and Berrien counties near the Georgia-Florida line and that they were related to severe weather but could not specify whether tornadoes were the cause.

Another tornado later in the day in Albany resulted in another 4 deaths.

In Berrien County,  the sheriff's office confirmed to the National Weather Service that 2 people died near New Lois, likely in a continuation of the reported tornado that hit Adel, The Weather Channel reported.

Homes and buildings were damaged or destroyed in Alabama, Mississippi, Louisiana, Georgia and Texas Saturday.

States of emergency have been declared in Georgia and Mississippi. 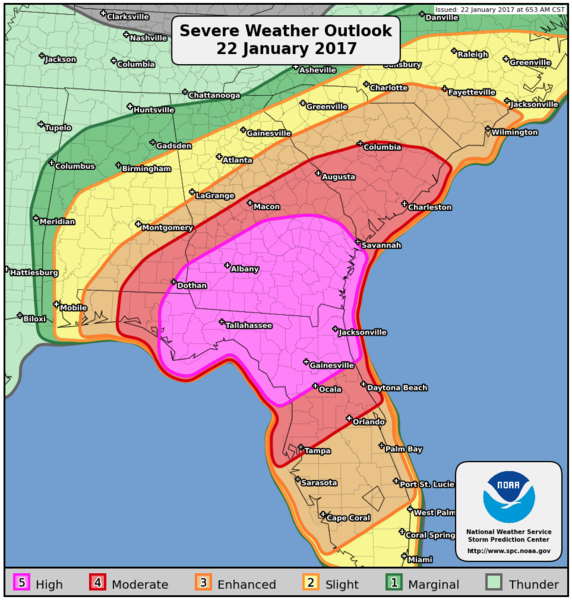 This is the first high risk severe weather outlook to be issued by SPC since June 3, 2014.