A powerful cyclone hit Great Britain on Thursday, January 12, 2017 and rapidly strengthened over the English Channel and northern France, bringing hurricane-force winds to the region. Its center then moved over Belgium, Luxembourg, Netherlands, Germany and Poland. This powerful winter storm, named Egon, is expected to continue its NNE track over Lithuania, Latvia, Estonia, southeastern Finland and into northwestern Russia by early January 15, 2017 (UTC). At least 3 people have lost their lives by Friday evening.

The cyclone underwent rapid strengthening (bombogenesis) during the late UTC afternoon of January 12 over northern France. Normandy and Picardie regions were the hardest hit.

In the northern port city of Dieppe, weather stations registered peak winds of 146 km/h (90.7 mph). The strongest reported winds in France were measured in Markstein, near the border with Germany and Switzerland, at an altitude of 1 200 m (3 940 feet). Weather stations there measured record breaking winds of 163 km/h (101.3 mph).

Over 6 000 rescue workers were called out to deal with 4 452 emergencies, the France24 reported. More than 1 000 people were forced to evacuate their homes because of fallen trees, ruptured power cables, and damaged roofs. An international Thalys train with 200 passengers was left stranded in northern France overnight because of a fallen tree branch on the line. 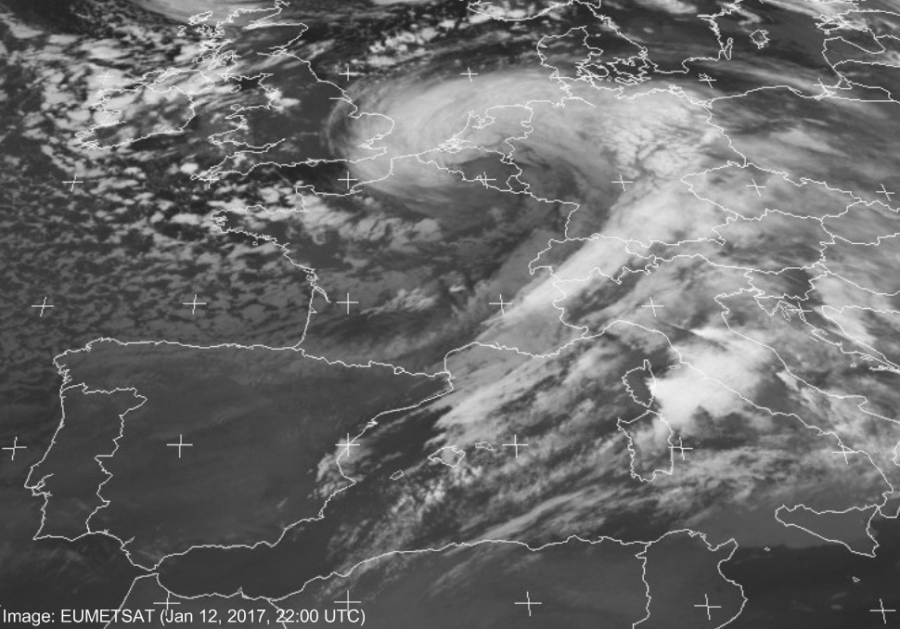 A woman was killed by a falling tree Friday morning in the town of Saint-Jeannet near Nice. She was bringing her children to school.

More than 330 000 homes in France were left without power as the storm hit. Some 200 000 were still without power Friday morning.

In Germany, at least two people have died on slippery roads as hurricane-force winds and snow swept across the country early Friday, January 13. One casualty was reported in Schleswig-Holstein and another in near Fulda in Hesse.

By Friday morning, Egon had already covered parts of Germany in snow, uprooted trees and shut down streets, The Local reported. The German Weather Service (DWD) said that certain areas may get up to 30 cm (11.8 inches) of snow within hours. Frankfurt, Leipzig, and Dresden airports canceled flights.

"The storm was so strong that the airplane handling crews had to be temporarily stopped," a spokesperson for the Frankfurt airport company told AFP.

In Rhineland-Palatinate, southwestern Germany, winds reached a speed of up to 148 km/h (92 mph).

In Switzerland, Egon has produced the strongest winds in the mountains west of Zurich, near the border with France and Germany. Weather stations there measured winds of 154 km/h (96 mph), according to the Meteo News.

A 10-car collision has occurred in a highway tunnel near Basel, one person was injured. Some 10 000 homes were left without power near Biel after trees fell on power lines.

Egon is expected to continue its NNE track over Lithuania, Latvia, Estonia, southeastern Finland and into northwestern Russia by early January 15, 2017 (UTC).