The deserts of Saudi Arabia were covered in snow at the end of November 2016, bringing joy to surprised Saudis who marked the occasion building snowmen. However, the weather soon turned very serious, and deadly. The first snowfall in northern parts of the country was reported on November 23.

The snowfall came after temperatures dropped below 0 °C (32 °F) in central and northwestern regions of the country, which tend to see daily high temperatures of around 20 °C (68 °F), even in November.

In the central city of Shakra’ and the northwestern city of Tabuk, thin layers of snow carpeted the ground. In Tabarjal, a town located in the northern Al-Jawf region temperatures reached -3 °C (26.6 °F), and in Al-Quryat, a northern province, the temperature was -1 °C (30.2 °F), the AlArabiya reported on November 27.

For Saudi Arabia, mid-October is generally the short-lived peak rainfall season, but the country is still experiencing some light to medium showers this year.

Although this unusual event was initially greeted with joy, as the temperatures rose and the rains continued, parts of the country were flooded, leaving at least 7 people dead by Tuesday, November 29.

According to AlArabiya article published today, at least seven people died and many others were injured or trapped by heavy rain and floods that swept various regions of Saudi Arabia by Tuesday.

The dead included three young Saudi men in Bisha, two others in Baha and two expatriates who were struck by a thunderbolt in Qunfudah. 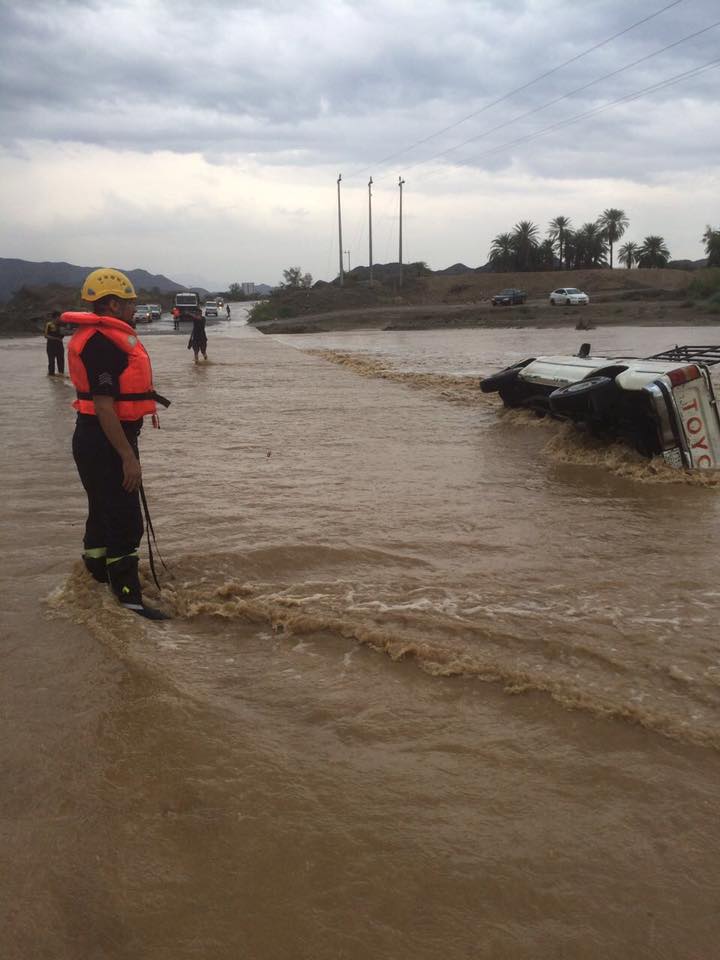 Torrential floods also destroyed a number of houses, blocked roads and overturned vehicles. The rain and floods in the last few days uncovered the ineffective drainage systems in many parts of the country, the paper said. The rain inundated various parts of Qunfudah governorate and washed away large sections of the International Road linking Jeddah and Jazan.

Bisha was lashed by heavy rain for more than three hours, leaving three people dead and two others injured in a traffic accident in the city.

The rain flooded Wadi Houran, in the southwest of the governorate, causing cracks in the road leading to Arar in the north of the Kingdom. The rain also caused a number of cars to overturn or skid off roads.

Professor of climate science at Qassim University, Abdallah al-Musanad, said that this is “the second rainfall this season,” even though 40 days have passed since the end of rain season.

In January 2016, snow was reported in the area between Mecca and Medina for the first time in 85 years.

Video from Thursday shows snow/hail falling in Saudi on the road between Mecca and Medina. First time in decades. pic.twitter.com/JxJ4FiUQCt