As of early October 11, Matthew's US death toll has climbed to at least 23, with nearly half of the casualties in North Carolina.

North Carolina officials warn that life-threatening flooding from swollen rivers will continue for days and fear a repeat of Hurricane "Floyd" of 1999, one of the state's worst natural disasters.

But North Carolina was already soaked when Matthew formed, with several dams at critically high levels. Over 228 mm (9 inches) of flooding rain fell in eastern parts of the country on September 29, 2016, washing away roads and causing numerous water rescues. The hardest hit was the city of Fayetteville in Cumberland County where 25 water rescues were performed.

Towns across the state have been deluged, roads paralyzed and left without power, leaving some communities stranded.

At least 11 people have died in the state and with major flooding events still in progress authorities fear the number will rise.

“This storm is not over in North Carolina," Governor Pat McCrory said. “It’s going to be a long, tough journey."

Some 2 000 residents were stuck in their homes and on rooftops in Lumberton, off the Lumber River, after the city suddenly flooded on Monday morning, McCrory said. Rescue workers were scrambling to reach more than 1 000 people.

On Tuesday, October 11, residents in low-lying areas southwest of Raleigh were urged to seek higher ground amid warnings of flash floods and fears that a major dam could rupture.

A mandatory evacuation was also issued for residents and businesses along the Neuse River. Areas further downstream such as Kinston are expected to see levels peak around October 15.

Officials in North Carolina fear a repeat of Hurricane Floyd, one of the state’s worst natural disasters.

That storm caused 57 deaths — 35 of them in North Carolina, most of them from inland drowning in the days after rain subsided.

Floyd also caused an estimated $6 billion in damages, leaving thousands without homes and keeping communities underwater for days and weeks.

In some cases, the flooding rivals that of Floyd.

As of 12:00 UTC on October 11, 2016, there are 55 gauges in different flood stages across the Carolinas and Virginia, most of them in eastern North Carolina. 15 of them are showing major flooding, 12 of which in North Carolina and 3 in South Carolina. 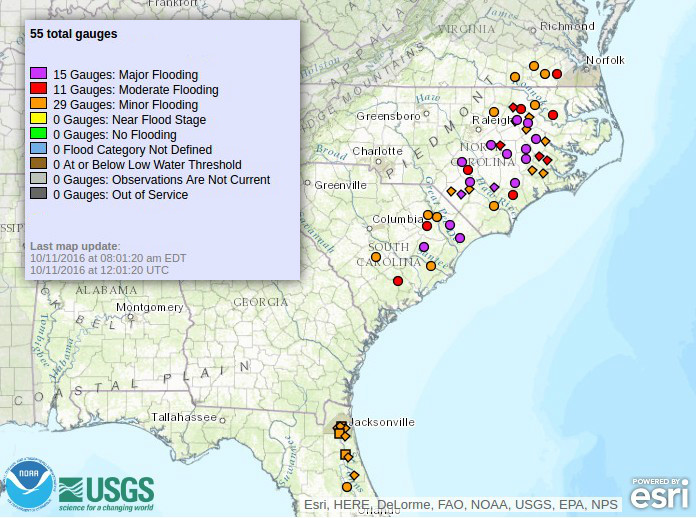 Lumber River at Lumberton exceeded record crest by nearly 1.21 m (4 feet) on October 9 breaking the record set in 2004 by Hurricane "Francis." The river is forecast to remain in record flood stage through the rest of the week.

Over the next few days, major flooding is expected in central and eastern towns along the Lumber, Cape Fear, Neuse and Tar rivers.

Spencer Rogers, a coastal construction and erosion specialist with North Carolina State University’s Sea Grant program, said the flooding in North Carolina is driven by the dynamics of the state’s river systems as they run through the coastal plain. “The ocean can receive a lot of water,” he said.

“It’s the river areas where the confined river basin backs up the water and it just can’t flow out fast enough.”