"As one example, the AMO index may be related to the past occurrence of major droughts in the US Midwest and the Southwest. When the AMO is high, these droughts tend to be more frequent or prolonged, and vice-versa for low values of AMO. Two of the most severe droughts of the 20th century in the US occurred during the peak AMO values between 1925 and 1965: The Dust Bowl of the 1930s and the 1950s drought. On the other hand, Florida and the Pacific Northwest tend to be the opposite; high AMO is associated with relatively high precipitation."

Cooling of the Atlantic is likely to bring drier summers in Britain and Ireland, accelerated sea-level rise along the northeast coast of the United States, and drought in the developing countries of the African Sahel region, a press release for a study by scientists from the University of Southampton and National Oceanography Centre (NOC) published last year said5. "Since this new climatic phase could be half a degree cooler, it may well offer a brief reprise from the rise of global temperatures, as well as result in fewer hurricanes hitting the United States. The study proves that ocean circulation is the link between weather and decadal scale climatic change. It is based on observational evidence of the link between ocean circulation and the decadal variability of sea surface temperatures in the Atlantic Ocean."

Lead author of this study, Dr. Gerard McCarthy from the NOC, said: "Sea-surface temperatures in the Atlantic vary between warm and cold over time-scales of many decades. These variations have been shown to influence temperature, rainfall, drought and even the frequency of hurricanes in many regions of the world. This decadal variability is a notable feature of the Atlantic Ocean and the climate of the regions it influences."

These climatic phases, referred to as positive or negative AMO's, are the result of the movement of heat northwards by a system of ocean currents. This movement of heat changes the temperature of the sea surface, which has a profound impact on climate on timescales of 20 – 30 years. The strength of these currents is determined by the same atmospheric conditions that control the position of the jet stream. Negative AMO's occur when the currents are weaker and so less heat is carried northwards towards Europe from the tropics. The strength of ocean currents has been measured by a network of sensors, called the RAPID array, which have been collecting data on the flow rate of the Atlantic Meridional Overturning Circulation (AMOC) for a decade.

The AMOC, part of which is known as the Gulf Stream, has been seen to weaken over the past 10 years, a study by Laura Jackson of the UK's Met Office said6. Her study also suggests that this weakening trend is likely due to variability over decades. "The AMOC plays a vital role in our climate as it transports heat northwards in the Atlantic and keeps Europe relatively warm," Jackson said. Any substantial weakening of a major North Atlantic ocean current system would have a profound impact on the climate of northwest Europe, including the UK. The research also showed a link between the weakening in the AMOC and decreases in density in the Labrador Sea (between Greenland and Canada) several years earlier.

In the diagrams below, courtesy of Ole Humlum4, only original (raw) AMO values are shown.

Humlum writes: "As is seen from the annual diagram, the AMO index has been increasing since the beginning of the record in 1856, although with a clear, about 60 yr long, variation superimposed. Often, AMO values are shown linearly detrended to remove the overall increase since 1856, to emphasize the apparent rhythmic 60 yr variation. This detrending is usually intended to remove the alleged influence of greenhouse gas-induced global warming from the analysis, believed to cause the overall increase. However, as is seen in the diagram below, the overall increase has taken place since at least 1856, long before the alleged strong influence of increasing atmospheric CO2 began around 1975 (IPCC 2007). Therefore, the overall increase is likely to have another explanation; it may simply represent a natural recovery since the end of the previous cold period (the Little Ice Age). If so, the general AMO increase since 1856 may well represent part of a longer natural variation, too long to be fully represented by the AMO data series since 1856. For the above reasons, only the original (not detrended) AMO values are shown in the two diagrams below:"

The map below shows the North Atlantic area within 60-0W and 30-65N, for which the heat content within the uppermost 700 m is shown in the diagrams below it3.

Interestingly, in a study by Zhou et al.7, a significant correlation was found between the solar wind speed (SWS) and sea surface temperature (SST) in the region of the North Atlantic Ocean for the northern hemisphere winter from 1963 to 2010, based on 3-month seasonal averages. "The correlation is dependent on Bz (the interplanetary magnetic field component parallel to the Earth's magnetic dipole) as well as the SWS, and somewhat stronger in the stratospheric quasi-biennial oscillation (QBO) west phase than in the east phase. The correlations with the SWS are stronger than those with the F10.7 parameter representing solar UV inputs to the stratosphere. SST responds to changes in tropospheric dynamics via wind stress, and to changes in cloud cover affecting the radiative balance. Suggested mechanisms for the solar influence on SST include changes in atmospheric ionization and cloud microphysics affecting cloud cover, storm invigoration, and tropospheric dynamics. Such changes modify upward wave propagation to the stratosphere, affecting the dynamics of the polar vortex. Also, direct solar inputs, including energetic particles and solar UV, produce stratospheric dynamical changes. Downward propagation of stratospheric dynamical changes eventually further perturbs tropospheric dynamics and SST."

The solar-wind speeds peak about 3 or 4 years after the Total Solar Irradiance (TSI) and sunspots peak in each cycle8.

Based on the current sunspot observations, their number for this solar cycle has peaked in January 2015, and our star is now on a steady path toward its next Solar Minimum, expected to hit the base just after 2020. 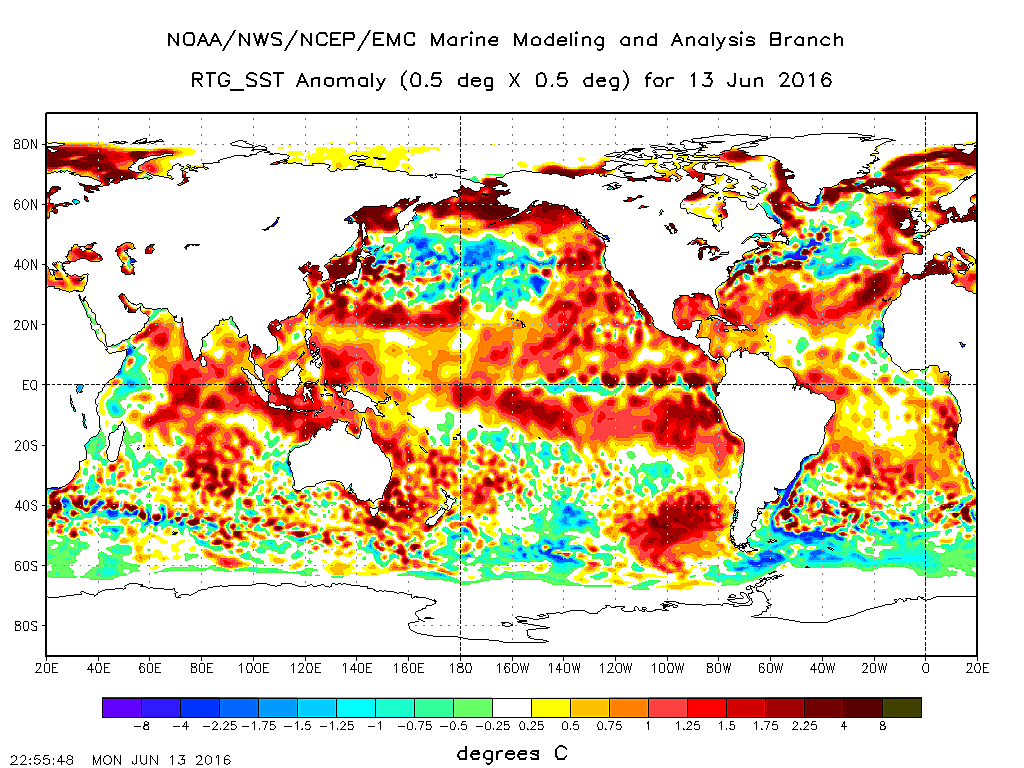 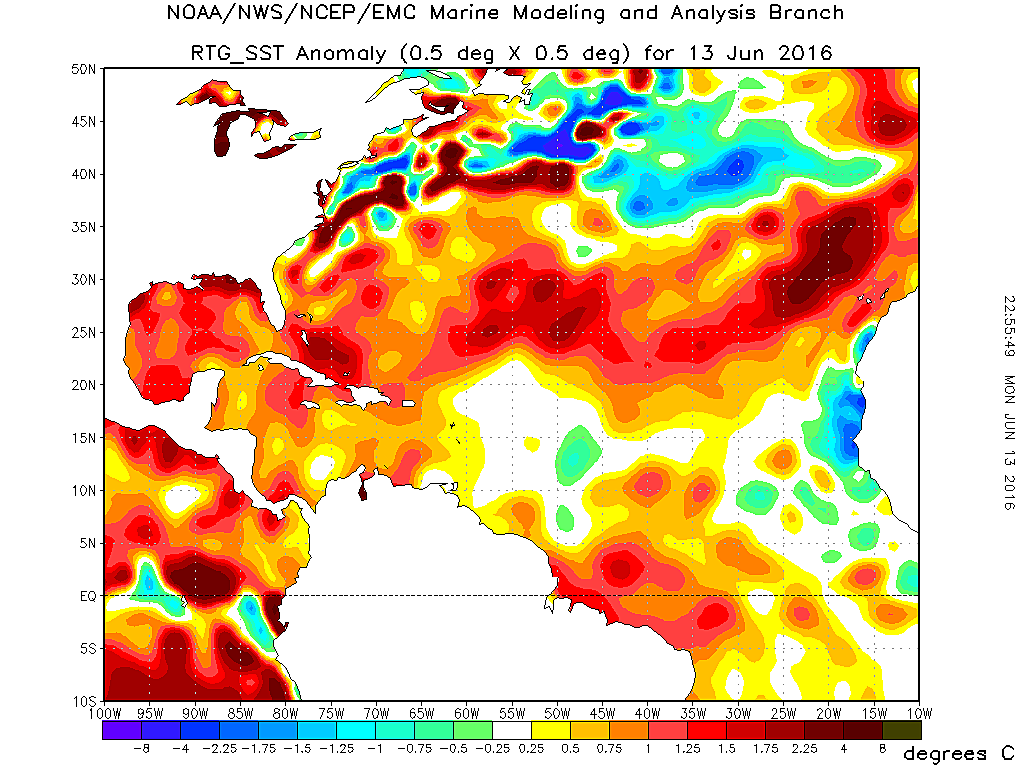