Geomagnetic storm reaching G2 – Moderate levels is currently in progress due to continuous influence from a positive polarity coronal hole. This influence will decrease over the next couple of days, however, the Coronal Mass Ejection (CME) associated with the M3.9 flare of November 9, 2015 is expected to arrive at Earth during the latter half of November 11 and fuel another round of geomagnetic storms.

Solar wind parameters, as measured by the ACE spacecraft, reflected the influence of a positive polarity coronal hole high speed stream (CH HSS) during the last 24 hours. Total magnetic field strength (Bt) peaked with values of 12 nT on November 9 at 19:26 UTC. Shortly afterwards they decreased and held steady between 7 to 10 nT throughout the rest of the period, SWPC said in their Forecast Discussion issued 12:30 UTC today.

The Bz component of magnetic field mostly varied, but had sustained periods of primarily southward orientation from 05:35 to 08:00 UTC and from 09:35 to 11:22 UTC on November 10. 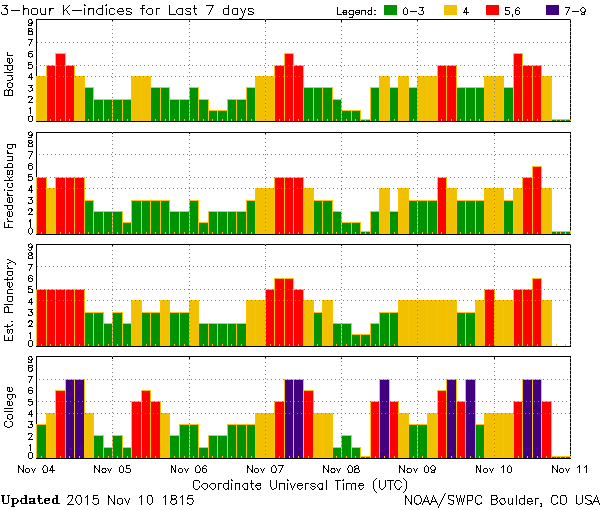 The geomagnetic field is expected to fluctuate between active and minor storm (G1) levels with an isolated period of moderate (G2) storming on November 10 due to continued influence of the CH HSS. Active conditions are forecast to continue into November 11.

Later during the day of November 11, a glancing blow from the November 9 CME will likely impact Earth's magnetosphere with periods of G1 storm levels, which will probably continue into the early November 12.