The study conducted by University of Nebrasca – Lincoln (UNL) researchers discovered that almost 2 million people across the Great Plains and California live above aquifer sites contaminated with natural uranium.

UNL researchers Karrie Weber and Jason Nolan analysed data from about 275 000 groundwater samples in the High Plains and Central Valley aquifers. According to the results, many residents live less than a kilometer (about two thirds of a mile) from contaminated wells, which by far exceeds uranium guideline limits set by the Environmental Protection Agency (EPA).

The aquifer of the High Plains is the largest in the US, and it is responsible for providing drinking water and irrigation for the states from South Dakota through Nebraska into northern Texas. The Central Valley aquifer, largest reservoir of drinking water in the state of California, is situated among some of the California's most fertile land. These two aquifers are responsible for irrigating cropland that accounts for one-sixth of the annual revenue generated by US agriculture, according to the US Department of Agriculture 2012 census. 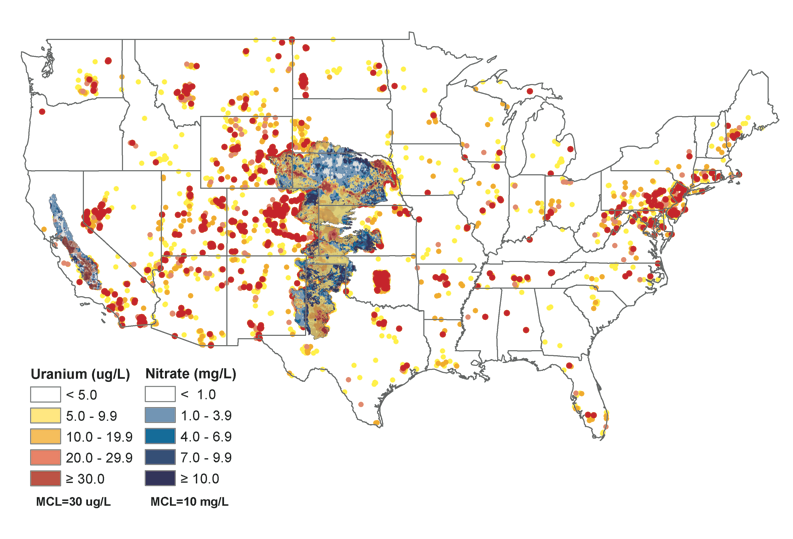 The intensity of groundwater contamination via uranium (red) and nitrate (blue) in two major aquifers and other sites throughout the nation. Image credit: UNL.

Uranium concentrations found in the aquifers across the High Plains are 89 times higher than the EPA standard proposes with nitrate concentrations greater by up to 189 times. In the Californian Central Valley, the aquifer reported up to 180 and 34 times the recommended EPA thresholds.

78% of the contaminated aquifers were linked to the presence of nitrate that originates from chemical fertilizers and animal waste. Nitrate is most commonly linked to groundwater contamination, and is responsible for mobilizing uranium through a series of bacterial and chemical reactions which oxidize the radioactive mineral, making it soluble in groundwater.

“It needs to be recognized that uranium is a widespread contaminant,” said Weber, assistant professor of biological, Earth and atmospheric sciences. “And we are creating this problem by producing a primary contaminant that leads to a secondary one.”

Research suggest long-term drinking of the contaminated water could cause kidney damage and heightened blood pressure. Weber explained it is possible the food crops are capable of accumulating uranium when irrigated with the water that already contains high concentrations.

“When you start thinking about how much water is drawn from these aquifers, it’s substantial relative to anywhere else in the world,” Weber explained. “These two aquifers are economically important – they play a significant role in feeding the nation – but they’re also important for health. What’s the point of having water if you can’t drink it or use it for irrigation?”

The water treatment plants expenses can reach up to tens of millions of dollars, which is usually out of financial reach of smaller rural communities. To address the issue the groundwater should be managed in a way to focus on the aquifers' sediment, which is a home to the bacteria species that breath and eat uranium, and can help to control it in that way.

Sources: University of Nebrasca – Lincoln (UNL), The Abstract of the paper – Science&Technology Letters

Featured image: The intensity of groundwater contamination via uranium (red) and nitrate (blue) in two major aquifers and other sites throughout the US. Image credit: UNL.