The Japan Meteorological Agency has raised the alert level of Sakurajima volcano to 4 out of 5 (prepare to evacuate) on August 15, 2015 after detecting a strong swarm of shallow volcanic earthquakes beneath the Showa crater.

The news comes just 4 days after Kyushu Electric Power Co. began bringing online the No 1. reactor at its Sendai nuclear power station on August 11. This, by the way, is the first nuclear facility to restart in Japan under new safety rules implemented following the 2011 Fukushima disaster. It is located just 50 km (31 miles) from Sakurajima. 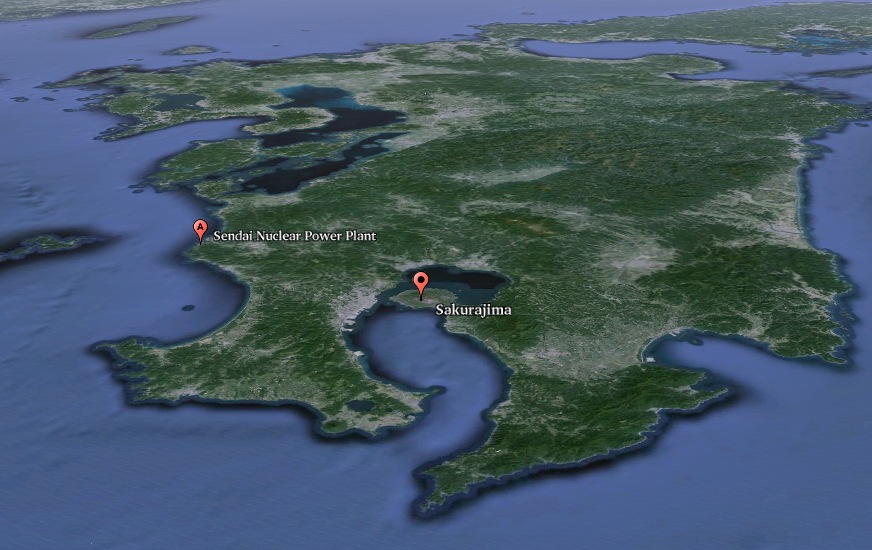 The seismic swarm under Sakurajima's Showa crater started around 22:00 UTC on August 14 (07:00 local time on August 15), and peaked with almost 180 quakes per hour around noon local time. It gradually waned, but continues with weaker intensity until now, Volcano Discovery reports today.

"At the same time, a significant inflation of the Showa crater has been detected. These both are likely caused by the rising of a new batch of magma, which could result in a larger-then-usual eruption," VD explains.

"While it is impossible to predict whether or not such an eruption will occur, authorities warn not to approach the crater within 3 km distance – a very moderate limit -, which is easily in the range of ballistic projectiles and pyroclastic flows that likely occur during a larger eruption."

Large eruption may pose a serious risk to the power plant

A large eruption of Sakurajima may pose a serious risk to Sendai nuclear power plant, according to the February 2015 report commissioned by Greenpeace and written by engineering consultant John Large:

"The tephra fall… is likely to have widespread and concurrent affects on a diverse range of activities and functions both on and off the NPP site – it is a common-mode initiator: it may cause machinery to seize; roofs may be damaged or collapse by ash overloading; off and on site electricity equipment may short-circuit and trip; transport routes to and from the NPP site may be impassable; NPP staff may be unable, or unwilling, to attend the site during the uncertainty of a volcanic eruption; and so on."

The Aira caldera in the northern half of Kagoshima Bay contains the post-caldera Sakurajima volcano, one of Japan's most active. Eruption of the voluminous Ito pyroclastic flow accompanied formation of the 17 x 23 km caldera about 22,000 years ago. The smaller Wakamiko caldera was formed during the early Holocene in the NE corner of the Aira caldera, along with several post-caldera cones. The construction of Sakurajima began about 13,000 years ago on the southern rim of Aira caldera and built an island that was finally joined to the Osumi Peninsula during the major explosive and effusive eruption of 1914.

Activity at the Kitadake summit cone ended about 4850 years ago, after which eruptions took place at Minamidake. Frequent historical eruptions, recorded since the 8th century, have deposited ash on Kagoshima, one of Kyushu's largest cities, located across Kagoshima Bay only 8 km from the summit. The largest historical eruption took place during 1471-76. (GVP)