Severe rainstorm accompanied with strong winds has affected several regions across Burkina Faso in West Africa, as of August 2, 2015. At least 8 people died, 54 have been reported injured and 19 779 people have been affected by the floods.

The regions of Ouahadougou and Bobo-Dioulasso in the Burkina Faso state were strongest affected by severe weather conditions. 1 240 houses were devastated leaving 3 699 people homeless. 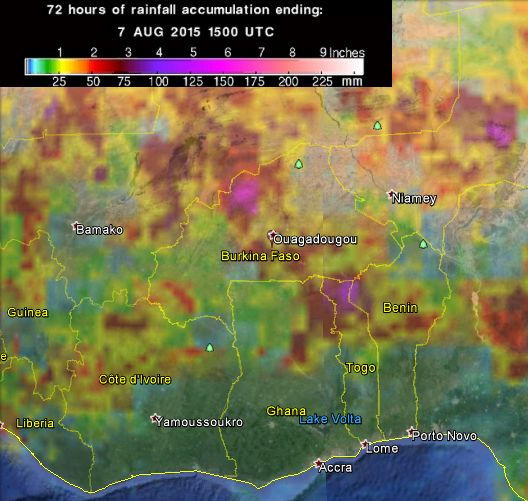 Gaoua measured 72 mm (2.8 inches) of rainfall from August 5 to August 6, World Meteorological Organization (WMO) reported. According to the official government statement, the month of August will be prone to heavy rainfall, and local residents should avoid areas identified as high risk flood zones, especially the parts near rivers and drainage channels.

The CONASUR (Conseil National de Secours d'Urgence et de Rehabilitation) provided relief across the flood affected areas, however it appears some gaps have been identified in relation to food security, health, rehabilitation and protection issues.​​

Nearly 4,000 without shelter and 20,000 in need of aid after #flooding in #burkinafaso http://t.co/mVFfgUut9q pic.twitter.com/YoBaCiIb0q

A statement issued by the Burkina Faso government said that August is expected to be a particularly rainy period and that residents should avoid high risk flood-zones, in particular those near rivers and drainage channels.

NOAA’s Climate Prediction Center’s Africa Hazards Outlook warned that heavy rainfall is still expected for the period between August 6 to August 12, across the already affected areas in West Africa.