Incessant mountain rain, snow and melting glaciers in a comparatively small region of land that hugs the southern Alaska coast and empties fresh water into the Gulf of Alaska would create the sixth largest coastal river in the world if it emerged as a single stream, a recent study shows.

Since it’s broken into literally thousands of small drainages pouring off mountains that rise quickly from sea level over a short distance, the totality of this runoff has received less attention, scientists say. But research that’s more precise than ever before is making clear the magnitude and importance of the runoff, which can affect everything from marine life to global sea level.

The collective fresh water discharge of this region is more than four times greater than the mighty Yukon River of Alaska and Canada, and half again as much as the Mississippi River, which drains all or part of 31 states and a land mass more than six times as large.

“Freshwater runoff of this magnitude can influence marine biology, nearshore oceanographic studies of temperature and salinity, ocean currents, sea level and other issues,” said David Hill, lead author of the research and an associate professor in the College of Engineering at Oregon State University. 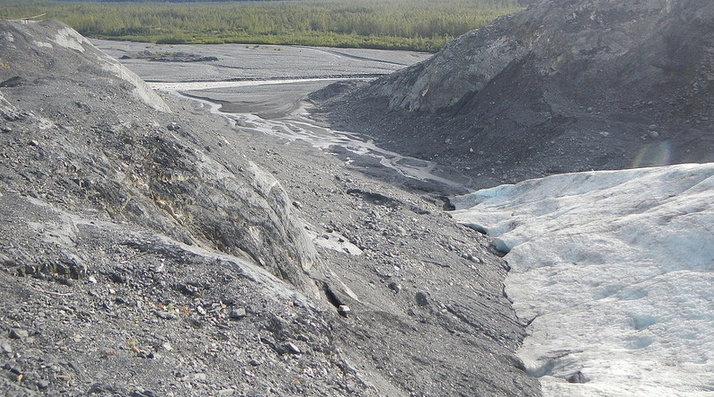 A melting tongue of Exit Glacier near Seward, Alaska, continues to dwindle and pour water into streams below, as it has been doing for decades. Image credit: OSU.

“This is an area of considerable interest, with its many retreating glaciers,” Hill added, “and with this data as a baseline we’ll now be able to better monitor how it changes in the future.”

The findings were reported in the Journal of Geophysical Research: Oceans, by Hill and Anthony Arendt at the University of Alaska-Fairbanks. It was supported by the North Pacific Research Board.

This is one of the first studies to accurately document the amount of water being contributed by melting glaciers, which add about 57 cubic kilometers of water a year to the estimated 792 cubic kilometers produced by annual precipitation in this region. The combination of glacial melt and precipitation produce an amount of water that’s larger than many of the world’s great rivers, such as the Ganges, Nile, Volga, Niger, Columbia, Danube or Yellow River.

“By combining satellite technology with on-the-ground hydraulic measurements and modeling, we’re able to develop much more precise information over a wider area than ever before possible,” Hill said.

The data were acquired as an average of precipitation, glacial melting and runoff over a six-year period, from 2003 to 2009. Knocked down in many places by steep mountains, the extraordinary precipitation that sets the stage for this runoff averages about 6 feet per year for the entire area, Hill said, and more than 30 feet in some areas.

The study does not predict future trends in runoff, Hill said. Global warming is expected in the future, but precipitation predictions are more variable. Glacial melt is also a variable. A warmer climate would at first be expected to speed the retreat of existing glaciers, but the amount of water produced at some point may decrease as the glaciers dwindle or disappear.

Additional precision in this study was provided by NASA’s Gravity Recovery and Climate Experiment, or GRACE satellites, which can make detailed measurements of gravity and, as one result, estimate the mass of glaciers they are flying over. As the glacial mass decreases over time, the amount of melted water that was produced can be calculated.

The close agreement of land-based measurements also help confirm the accuracy of those made from space, a point that will be important for better global understanding of water stored in a high-altitude environment.

Some of the processes at work are vividly illustrated at Glacier Bay National Park, where some of the most rapidly retreating glaciers in the world are visited each year by hundreds of thousands of tourists, many on cruise ships.