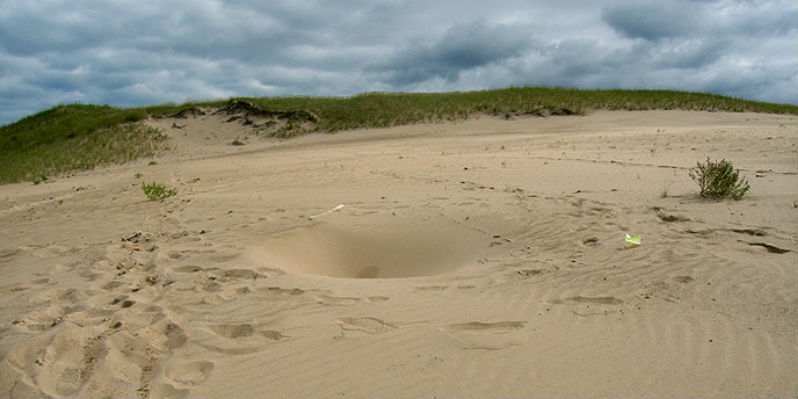 Six new mysterious holes have been discovered in the shifting sands of Mount Baldy since last summer when a big hole swallowed a 6-year old boy who remained buried under 3.3 meters (11 feet) of sediment for several hours until he was rescued.

A year after, scientists still don't have the answers on what causes this holes to form on the southern shore of Lake Michigan, USA.

US National Park Service officially closed the Mount Baldy area due to hazardous conditions and the location remains closed until further notice.

So far, scientists from the Environmental Protection Agency (EPA) and the Indiana University Geological Survey have identified six unstable areas, including 80 by 30 meters (263 by 99 foot) area where most of the collapses have occurred.

The Environmental Protection Agency (EPA) did a preliminary survey of the dune last August using ground penetrating radar and additional data. They discovered several "anomalies" but never determined what they might be.

EPA offered working hypothesis that natural (trees and brush) or anthropogenic (structures or debris) materials were buried by the rapid landward movement of the dune during the late 1900s. The age of the materials and the wet conditions during the spring of 2013 may have forced these materials to become unstable, collapsing and creating openings to the surface.

“There were trees growing, there were houses built, and now they’ve been covered by the dune. So now the whole shape of the old Mount Baldy from the 1930s is gone, and it’s a different dune.” Bill Mohaghan, Indiana Geological Survey

Professor Erin Argyilan, from Indiana University Northwest, visited the place as one of the investigators and said that Mount Baldy is the only place she has ever heard of sudden and deep holes appearing in the sand dune, which disappear almost as quickly. Argyilan says there may be a connection to the trees that Mount Baldy buried as it moved closer to the land in the past few decades.

"There’s been so much disturbance at the lakefront. We have a harbor structure at Michigan City that blocks the natural transport of sand to Mt. Baldy, so the system is what we call sand-starved, and when that happens, plus high visitor activity – people running up and down the dune – what you do is you destabilize the vegetation and trees that were here, and the sand begins to move and migrate." Professor Ern Argyilan, IU Northwest

Unlike the forested dunes, Mount Baldy is moving and waves from Lake Michigan keep bringing new sand deposits, allowing its movement to continue.

The Mount Baldy dune has moved about 120 meters (394 feet) in the past 70 years. Some scientists have speculated that massive sand blowing may have occurred due to steady drops in the level of Lake Michigan around the turn of the 20th century. Since that time, greater shoreline erosion have prevented the dune from regaining its plant cover, mostly caused by nearby harbor infrastructure and impact of hundreds of thousands of visitors that visit location every year and destroy plant cover.