Remnants of Super Typhoon "Nuri" have moved across the Pacific and are now bringing hurricane-force wind gusts to Western Aleutian Islands, Alaska. What's left of Nuri has combined with polar jet and on November 8th became the strongest low-pressure system ever observed in or near Alaska since October 25, 1977. The system is expected to bring frigid temperatures to much of the U.S. and Canada next week.

National Weather Service Office in Anchorage, Alaska issued a High Wind Warning for the Western Aleutian Islands including the cities of Shemya and Amchitka on Friday, November 7, 2014. The warning is valid from 18:00 UTC today to 18:00 UTC on Saturday, November 8 (09:00 AM AKST until November 8, 09:00 AM AKST).

The warning states that the southwest winds 32 – 56 km/h (20 – 35 mph) early on November 7 will rapidly increase to south 86 – 120 km/h (60 – 75 mph) with gusts of 128 – 144 km/h (80 – 90 mph) by late morning. During the afternoon and evening winds will shift to the southwest and continue through Saturday morning before slowly diminishing. Any travel may be difficult. Loose debris can be moved and damage property.

A high wind warning means a hazardous high wind event is expected or occurring. People are urged to secure loose objects that could be blown around or damaged by the wind.

The most powerful storm ever developed over the Bering Sea in recorded history, in terms of central pressure 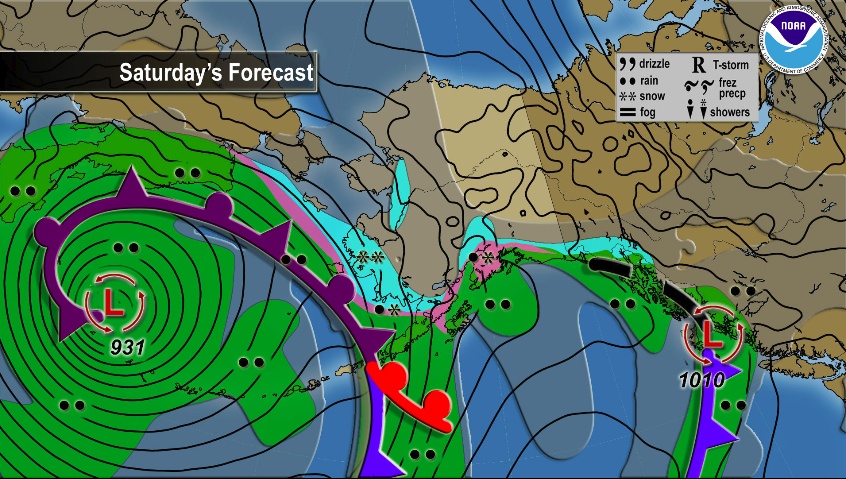 AccuWeather.com meteorologists said on November 7 they believe that this system could become one of the most intense storms to move over the Bering Sea.

"The central pressure of this system is forecast to drop below 930 millibars on Friday night. To put this in perspective, the lowest pressure recorded in Hurricane Sandy was 940 millibars. If the pressure of this storm does drop this low, it will be in contention for becoming one of the most powerful storms to ever develop over the Bering Sea in recorded history in terms of central pressure. The current record stands at 925 millibars from a powerful storm that moved over the Bering Sea on October 25, 1977."

And they were right.

An Arctic outbreak will bring the coldest air of the season, beginning Monday in the northern Rockies and northern Plains. The cold this time will last longer and will be more widespread than other cold surges we have seen so far this season.

Temperatures will remain below average for the central and eastern U.S. at least through the end of next week. (Weather.com) 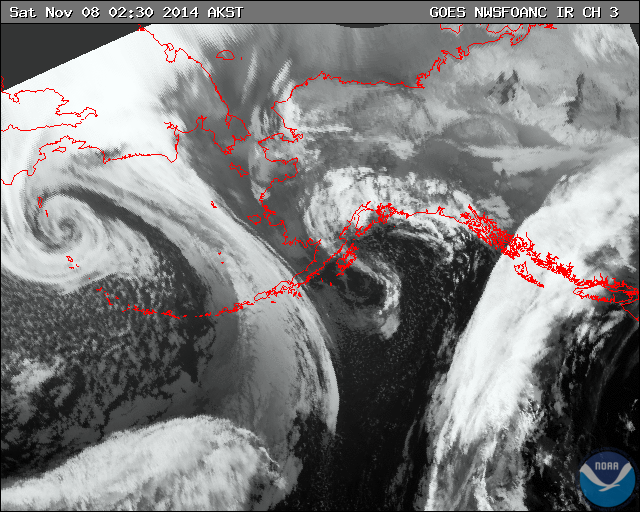 NASA's newest Earth observing mission, the International Space Station-Rapid Scatterometer, or ISS-RapidScat provided a look at the winds within post-tropical cyclone Nuri on November 5 and 6 as it moved parallel to Japan. 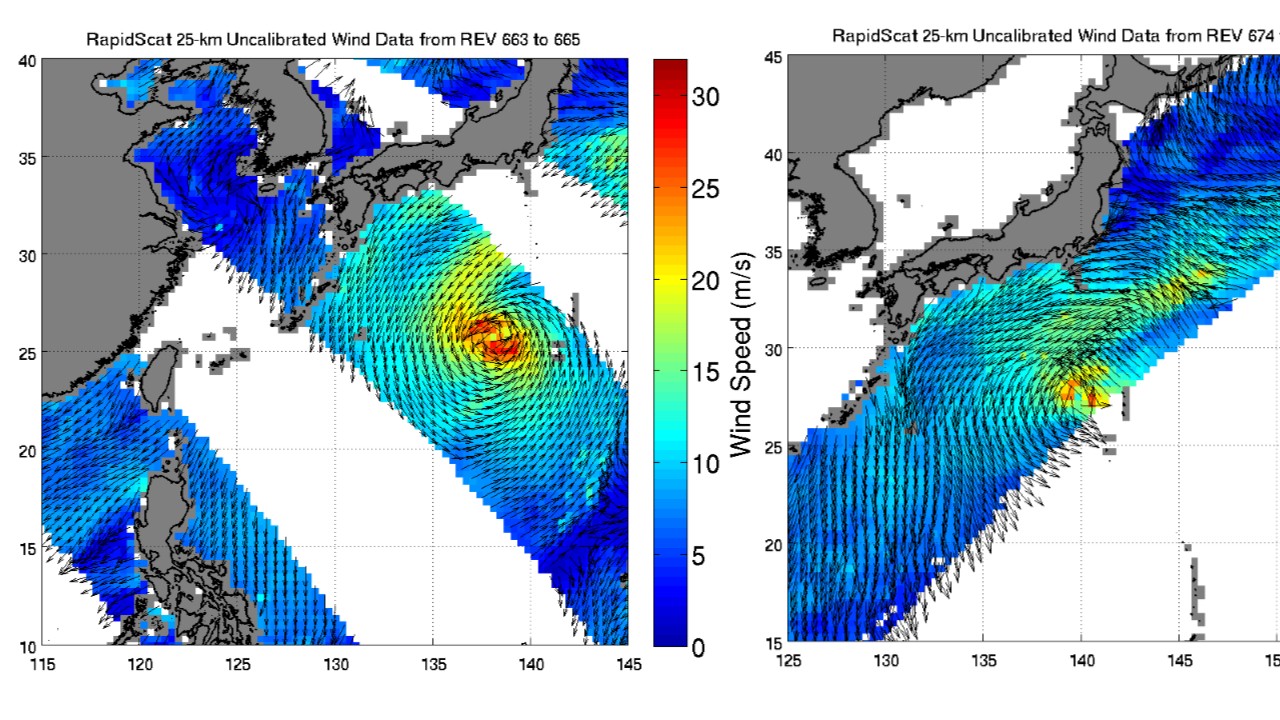 These two images of Nuri's sustained winds were taken by Rapidscat on November 5. Strongest winds (red) as fast as 30 meters per second (108 km/h/67.1 mph) appeared in the northwestern and southeastern quadrants. Image credit: NASA JPL 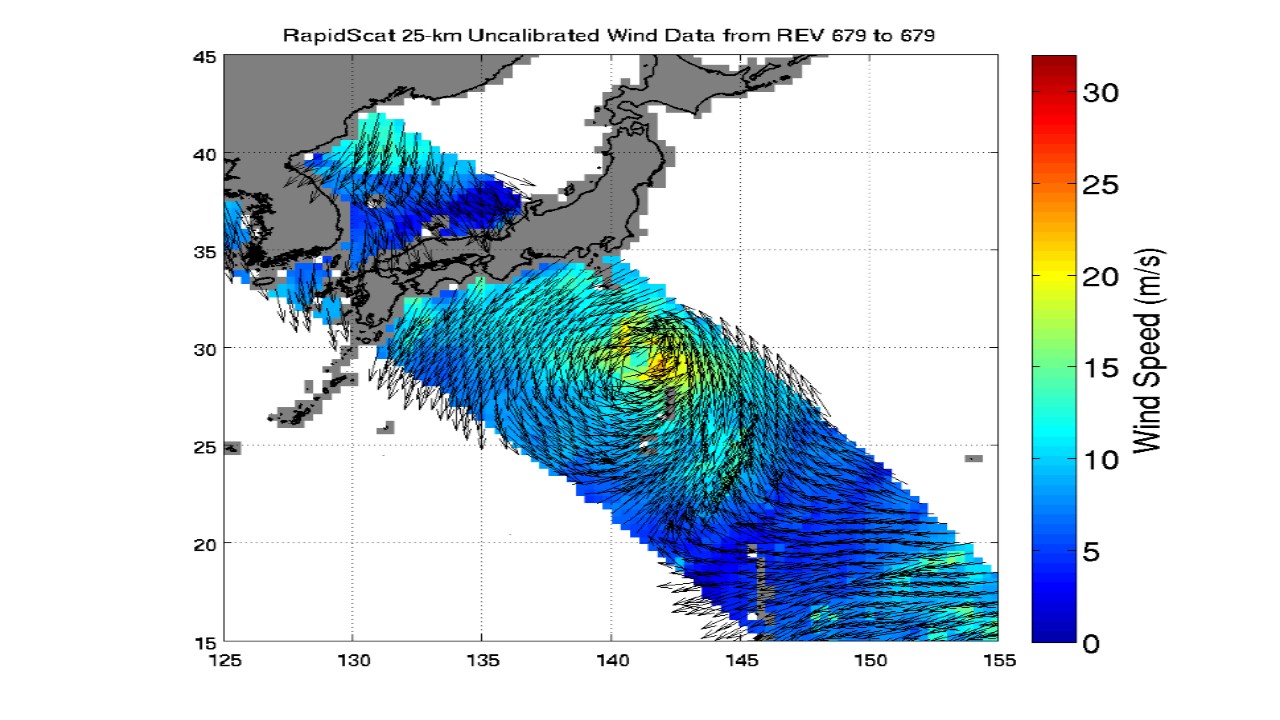 Tropical Storm "Nuri" formed in the Philippine Sea on Friday, October 31, intensified into a typhoon the next day and started its rapid intensification phase. On Sunday, November 2, Nuri reached super typhoon strength with maximum 1-minute sustained wids of 289 km/h (180 mph).

This made Nuri almost comparable to last month's Vongfong.