It is known that Earth’s magnetic field has flipped many times throughout the planet’s history. Its dipole magnetic field remains about the same intensity for thousands to millions of years, but for incompletely known reasons it occasionally weakens (such is the case now) and, presumably over a few thousand years, reverses direction. A new study, however, shows that the final stage – a sudden 180-degree flip – can happen within a human lifetime.

The new study was done by a team of scientists from Italy, France and USA and it demonstrates that the last magnetic reversal of Earth's poles which happened some 786 000 years ago actually happened very quickly, in less than 100 years.

The discovery comes shortly after ESA's "Swarm" satellite array revealed that the intensity of Earth’s magnetic field is decreasing 10 times faster than normal, decreasing in strength about 5 percent a decade rather than 5 percent a century.

Though a magnetic reversal is a major planet-wide event driven by convection in Earth’s iron core, there are no documented catastrophes associated with past reversals, despite much searching in the geologic and biologic record. Today, however, such a reversal could potentially wreak havoc with our electrical grid, generating currents that might take it down.

And since Earth’s magnetic field protects life from energetic particles from the Sun and cosmic rays, both of which can cause genetic mutations, a weakening or temporary loss of the field before a permanent reversal could increase cancer rates. The danger to life would be even greater if flips were preceded by long periods of unstable magnetic behavior.

“It’s amazing how rapidly we see that reversal,” said UC Berkeley graduate student Courtney Sprain. “The paleomagnetic data are very well done. This is one of the best records we have so far of what happens during a reversal and how quickly these reversals can happen.”

Sprain and Paul Renne, director of the Berkeley Geochronology Center and a UC Berkeley professor-in- residence of earth and planetary science, are coauthors of the study, which will be published in the November issue of Geophysical Journal International and is now available online.

“We should be thinking more about what the biologic effects would be,” Renne said.

The new finding is based on measurements of the magnetic field alignment in layers of ancient lake sediments now exposed in the Sulmona basin of the Apennine Mountains east of Rome, Italy. The lake sediments are interbedded with ash layers erupted from the Roman volcanic province, a large area of volcanoes upwind of the former lake that includes periodically erupting volcanoes near Sabatini, Vesuvius and the Alban Hills. 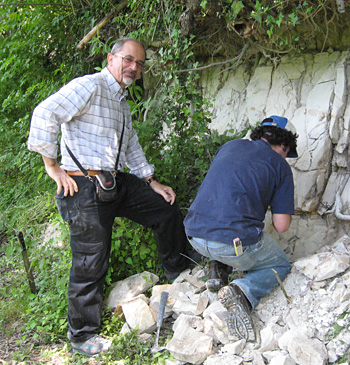 Italian researchers led by Leonardo Sagnotti of Rome’s National Institute of Geophysics and Volcanology measured the magnetic field directions frozen into the sediments as they accumulated at the bottom of the ancient lake.

Sprain and Renne used argon-argon dating, a method widely used to determine the ages of rocks, whether they’re thousands or billions of years old, to determine the age of ash layers above and below the sediment layer recording the last reversal. These dates were confirmed by their colleague and former UC Berkeley postdoctoral fellow Sebastien Nomade of the Laboratory of Environmental and Climate Sciences in Gif-Sur-Yvette, France.

Because the lake sediments were deposited at a high and steady rate over a 10 000-year period, the team was able to interpolate the date of the layer showing the magnetic reversal, called the Matuyama-Brunhes transition, at approximately 786 000 years ago. This date is far more precise than that from previous studies, which placed the reversal between 770 000 and 795 000 years ago.

“What’s incredible is that you go from reverse polarity to a field that is normal with essentially nothing in between, which means it had to have happened very quickly, probably in less than 100 years,” said Renne.

“We don’t know whether the next reversal will occur as suddenly as this one did, but we also don’t know that it won’t.”

Whether or not the new finding spells trouble for modern civilization, it likely will help researchers understand how and why Earth’s magnetic field episodically reverses polarity, Renne added. 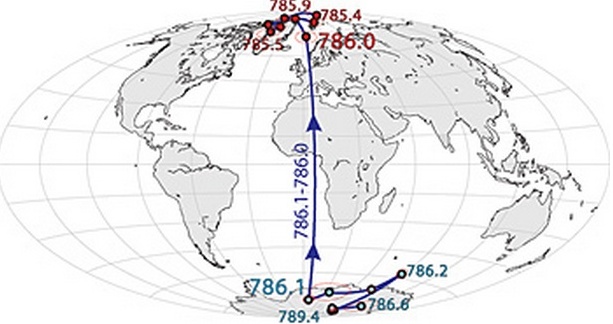 The ‘north pole’ — that is, the direction of magnetic north — was reversed a million years ago. This map shows how, starting about 789,000 years ago, the north pole wandered around Antarctica for several thousand years before flipping 786,000 years ago to the orientation we know today, with the pole somewhere in the Arctic.

The magnetic record the Italian-led team obtained shows that the sudden 180-degree flip of the field was preceded by a period of instability that spanned more than 6 000 years. The instability included two intervals of low magnetic field strength that lasted about 2 000 years each. Rapid changes in field orientations may have occurred within the first interval of low strength.

The full magnetic polarity reversal – that is, the final and very rapid flip to what the field is today – happened toward the end of the most recent interval of low field strength.

Renne is continuing his collaboration with the Italian-French team to correlate the lake record with past climate change.

Measurements made by Swarm over the past six months confirm the general trend of the field’s weakening, with the most dramatic declines over the Western Hemisphere. But in other areas, such as the southern Indian Ocean, the magnetic field has strengthened since January…

41 000 years ago, a complete and rapid reversal of the geomagnetic field occurred. As a consequence, the Earth nearly completely lost its protection shield against hard cosmic rays, leading to a significantly increased radiation exposure, a new study led by…

About geomagnetic reversal and poleshift

A growing number of scientists are starting to worry the magnetic pole shift, that seems to be underway, is the real culprit behind climate change. Not man made air pollution, not the Sun, not the underground volcanic activity heating up the oceans, but the slow…